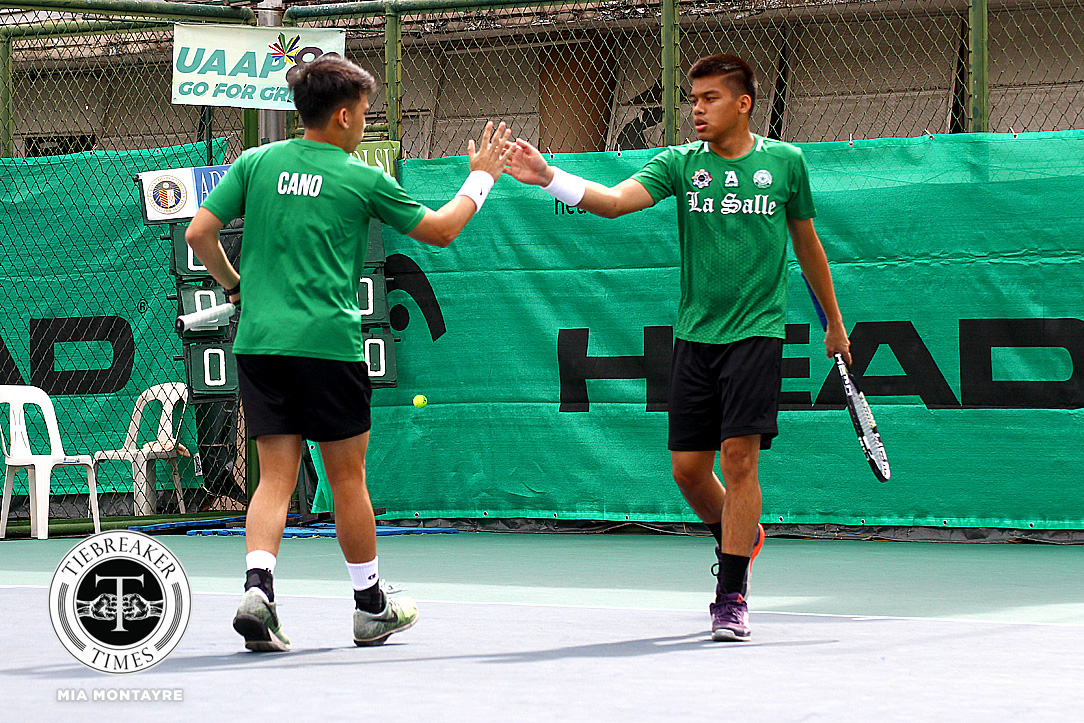 Fifth-year captain Kyle Parpan started it off from the men from the nearby institution after he took care of third-year Atenean Marcen Gonzales in just two sets, 6-1, 6-2. It was a masterful work from the Green Archer from service to returns.

Betto Orendain then had to shake off Gonzales’ brother and this season’s lone rookie Bong to take a 2-0 lead for the Taft-based side. The lanky third-year player had to come back in the opening set before taking it at 7-5, and never relinquished the momentum and finished the second singles match at 6-3.

Over at the middle court of their side of the Center, Ateneo took one back. Blue Eagles Anton Punzalan and Julian Dayrit pulled off a win after nosing out Hans Asistio and Rap Teng in the first doubles match. It was too tight to call, but ultimately, the senior-sophomore tandem from Katipunan bagged the rubber at 7-5, 7-6.

Nonetheless, La Salle eventually closed it out in the other doubles match. Qoqo Allian and Jonah Cano pocketed the victory for the Green and White after two contrasting sets. Luke Flores and Erj Gatdula made a fight of that opening set, before the Archers took it at the tiebreak (7-6). From there, Allian and Cano never looked back and finished the match at a huge 6-1 second set.

After the tie, Parpan shared his happiness that they have started the season with a win. “It’s a good start. I remember last year, [we started the season] against Ateneo rin and we lost a tight match. We’re able to turn it around,” he said. “Masarap pala sa pakiramdam in preparation for tomorrow. I guess we have so much confidence for tomorrow’s game.”

The Green Tennisters (1-0) will face fellow opening day winners University of Santo Tomas on Sunday at 8am. Afterwards, the Blue Eagles (0-1) will try to challenge the debuting defending champions University of the East, wgi are playing without reigning Most Valuable Player AJ Lim, who is currently on national team duty.