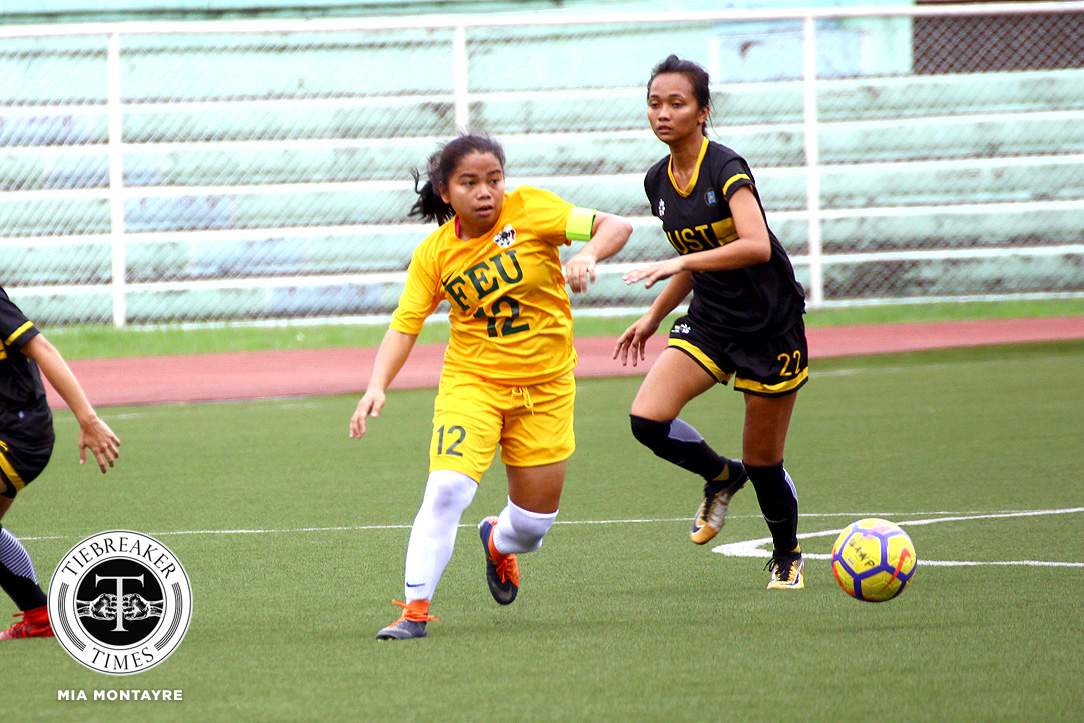 The Lady Tamaraws bucked a first-half goal after they conceded a penalty early in the contest. The referee spotted a foul in the FEU box and Charise Lemoran converted the spot-kick in the 16th minute.

Down a goal at the break, a more determined Lady Tamaraws side returned to the pitch after halftime. Marie Simoy launched a free kick into the UST box, which was headed over by Mae Caw-It.

FEU relentlessly knocked on the door, and the Morayta school finally got their reward in the 66th minute. The Lady Tamaraws had been awarded a penalty a minute earlier due to handball, and Jovelle Sudaria shot past Lady Booters goalie Nicole Reyes to level the scores.

UST tried to retaliate immediately, and star forward-turned-midfielder Charise Lemoran tried her luck from distance but saw her strike denied by the crossbar. It was a similar tale at the other end, as FEU went close to seizing the lead, only for Simoy’s shot to hit the woodwork.

It was in the game’s dying stages that FEU finally clinched control of the game. The Lady Tamaraws were awarded a free kick outside of the Lady Booters’ box, and Sudaria unleashed one past Reyes to give FEU the lead in the 87th minute.

The Lady Tamaraws had as good as won the game at that point, and their victory was made sweeter when Kadil converted another free kick to seal all three points deep into stoppage time.

Ultimately, FEU earned a late 3-1 victory over UST to begin a potential run at the championship. “Inassume namin na ang La Salle at UST ang malakas na makakalaban namin. That why I told them start pa lang so we have to level up agad sa kanila para at least malalaman namin kung saang level kami at kung anong tatahakin namin for this season,” concluded Dimzon.

The two schools shall next face the Ateneo de Manila University at the Rizal Memorial Stadium. FEU hops to defeat Jay Pee Merida’s team on February 14, 3:00 PM, while UST will try to bounce back against the Katipunan school at February 10, 9:00 AM.