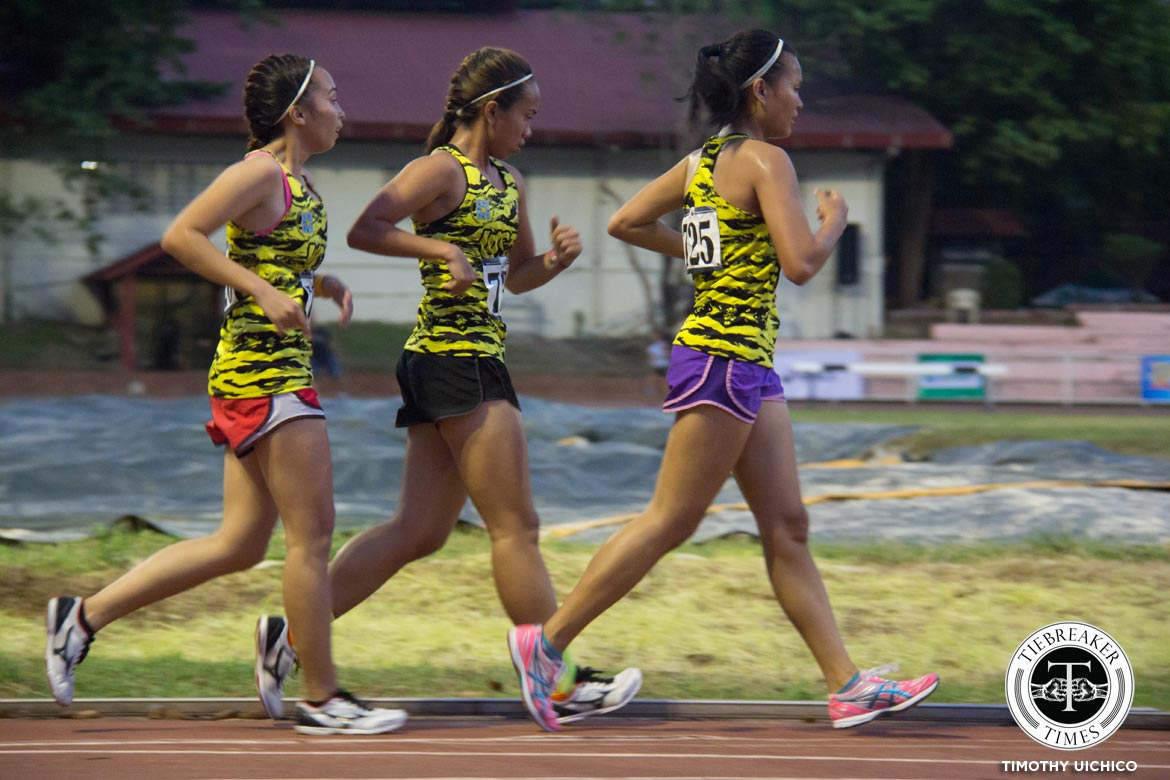 The University of Santo Tomas, the school that ended had Far Eastern University’s 11-year reign, have been the champions since Season 77 and are hoping to keep it that way this season.

With most of the line-up still being intact, UST is expected to defend their title. However, other teams have been preparing aces up their sleeves, so only time will tell if UST can hold on to their title this season.

Malonzo and Pamatian On Form

Tailing her were UST’s Eloiza Luzon and University of the Philippines’ (UP) Jeremiah Malonzo, respectively clocking 12.29 and 12.49 seconds. Last year’s gold medalist Karen Janario of UST only managed to place fifth with a time of 12.51 seconds, way behind her winning time for the heats last year of 12.05 seconds.

In the finals, the top three remained intact. However, it was UP’s Malonzo who surged ahead of the three in the last stretch to bag the gold medal with a time of 12.21 seconds. Second place finisher Luzon held on during the last stretch and finished with 12.27 seconds.

Zulueta faded right as Malonzo started surging away. She settled for another bronze this season after only managing to clock 12.40 seconds.

The 800m title is now up for grabs as defending champion Neslee Angco from University of the East has graduated. Louielyn Pamatian of UST, who won silver last year, hoped to bag that title.

UST led the way in the qualifying round with Feiza Lenton and Pamatian clocking 2:21.93 and 2:22.00 respectively. FEU’s Ganoa followed behind with 2:23.71, and last year’s bronze medalist Maria Lyca Sarmiento of ADU clocking a 2:24.89 to comfortably qualify for the finals.

The top three qualifiers were still the same athletes come the finals, with only a slight modification. It was Pamatian who held on to win the gold medal with a time of 2:20.05. Lenton was over a second behind her teammate Pamatian after clocking 2:21.10. Gagnoa settled for the bronze medal after clocking 2:23.21.

UST’s road to defending their championship was not going to be easy. Although at first it did look like they had the upper edge, a championship is not over until it is over.

Come the finals of the high jump that afternoon, no UST athletes were in sight. FEU swept the competition away with a gold-silver-bronze medal finish.

Kay Lene Mosqueda, Josefa Ligmayo, and Jelly Paraguille jumped 1.68m, 1.65m, and 1.65m respectively to deliver a deadly blow to UST’s title defense aspirations. Mosqueda not only led this feat by FEU, but also defended her title along the way.

Silver and bronze medalists Marianne Audrey Yorac of UP, and Maureen Schrijvers of DLSU, both failed to reach the podium this year. Both Schirjvers and Yorac managed to clear 1.60m this year, but were only good enough for a fourth and fifth place finish.

UST did manage to bounce back with both the hammer throw and 5000m walk.

In the hammer throw, UST managed to bag gold and bronze with Luz Delfin and Cristelle Jane Ferrera. They threw 41.88m and 36.46m respectively. Delfin, with her gold medal-winning throw, established a new UAAP record.

Finishing in second spot was University of the East’s Reah Joy Sumalpong who fell short of a gold medal with a throw of 41.68m.

For the 5000m walk, UST showed dominance in the first few laps, as Richie Dala, Michelle De Vera, and Krisha Sardenia were leading the pack. Trailing behind the three was UP’s Ma. Elizabeth Capiosio.

However, Capiosio managed to overtake them and bag the gold medal with a time of 29:35.5, the only sub-30-minute time of the evening.

Over half a minute behind Capiosio was Dala who settled for the silver medal with a time of 30:18.9, with Dala’s teammate De Vera just a few meters behind her with a time of 30:31.8. Their other teammate Sardenia was sadly disqualified from the race.

Nash Racela laments TNT’s errors: ‘We made a lot of mistakes’