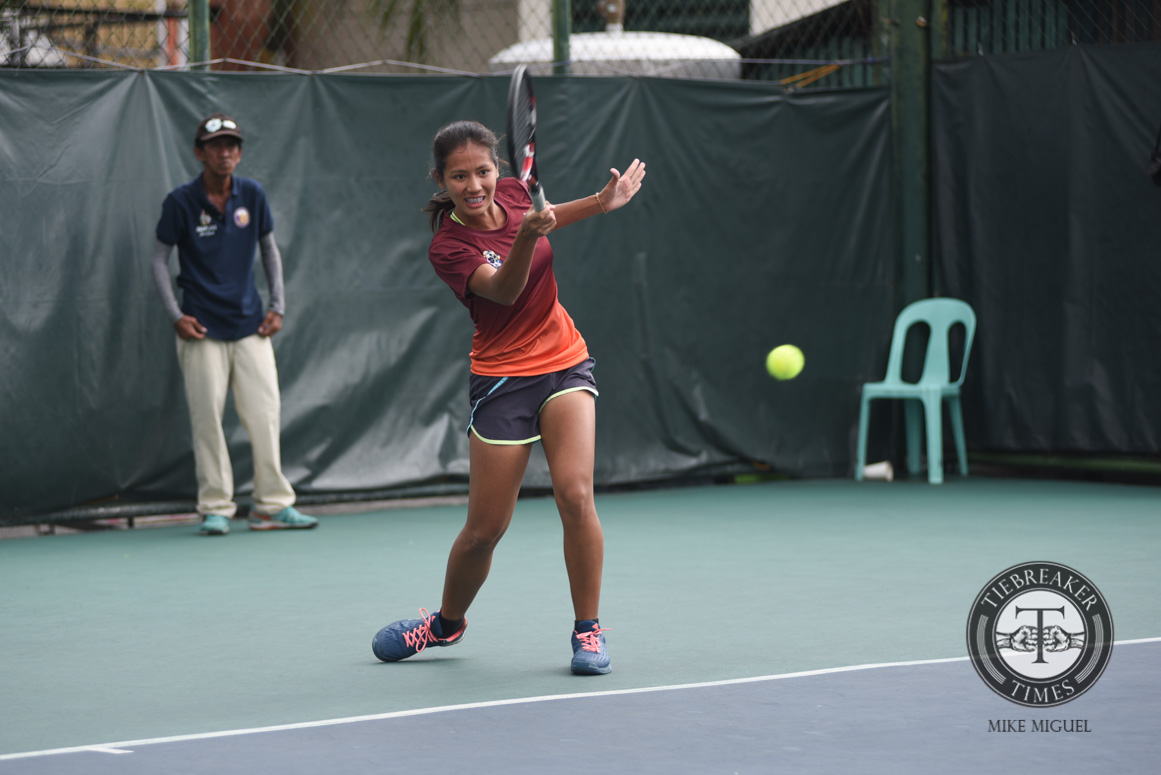 University of the Philippines women’s tennis team captain Nicole Eugenio reiterated, “We just approached [the season] na we don’t have to win, we don’t have to notice the standings. Just play the game, every point, yun lang.”

With that “no pressure” outlook, the Lady Maroons have successfully secured their second win after fourth-year CJ Valdez clinched the tie, 3-2, against the Ateneo de Manila University Lady Eagles, Sunday at the Rizal Memorial Tennis Center.

The Katipunan neighbors battled through, ending up splitting the first four matches.

Ateneo raced early to a 2-0 advantage after pocketing the first doubles and the second singles matches. Jessica Agra and Jana Hernandez finished off Dana Uy and Monika Bañez, 6-3, 6-0. This happened just as Season 78 Rookie of the Year Jana Pages swept UP newbie Daniella Carranza, 6-2, 6-1.

That turned out to be the Loyola side’s last stand in the day.

Eugenio shook off the first-set loss and dominated Nicole Amistad in the next two, 6-7, 6-1, 6-1, in the first singles match. Denise Jimenez and Monica Cortez edged out Rocio Clement and Alexis McLean, 6-4, 6-4, in the second doubles match to level the tie.

It all boiled down on who wanted it more between the two seniors, UP’s CJ Valdez and Ateneo’s Khrizelle Sampaton.

Valdez and Sampaton had their fair share of successful returns and head-scratching errors. However, it was a long forehand shot from the latter that sealed the match and conceded the win to UP in the third.

It was such a reprieve for the UP senior, who shared that she is hanging up her jersey after the year. “Last year ko na to sa tennis, gusto kong mabawian yung Ateneo,” she said. “Kasi last year, dikit lang din yung game eh. Nanghinayang ako. Kaya sabi ko, ‘Babawian ko to. Kahit ano pang laban.'”

Despite the wins, Eugenio said, “We’re not thinking about it. Take it game by game. Hindi siya sa standing eh. We just play our hearts out.”

Nonetheless, the relatively stronger start will serve as a motivation to go for more. The UP skipper added, “Siyempre mas nakakagana siyang maglaro lalo na sa second round. Parang, we have two wins, we have the confidence to achieve more.”

The Lady Maroons (2-2) will begin the second round of action on Saturday, March 4. On the other hand, the Lady Eagles (0-3) will resume their abandoned tie against the De La Salle University Lady Tennisters (0-3) on Wednesday, March 1.