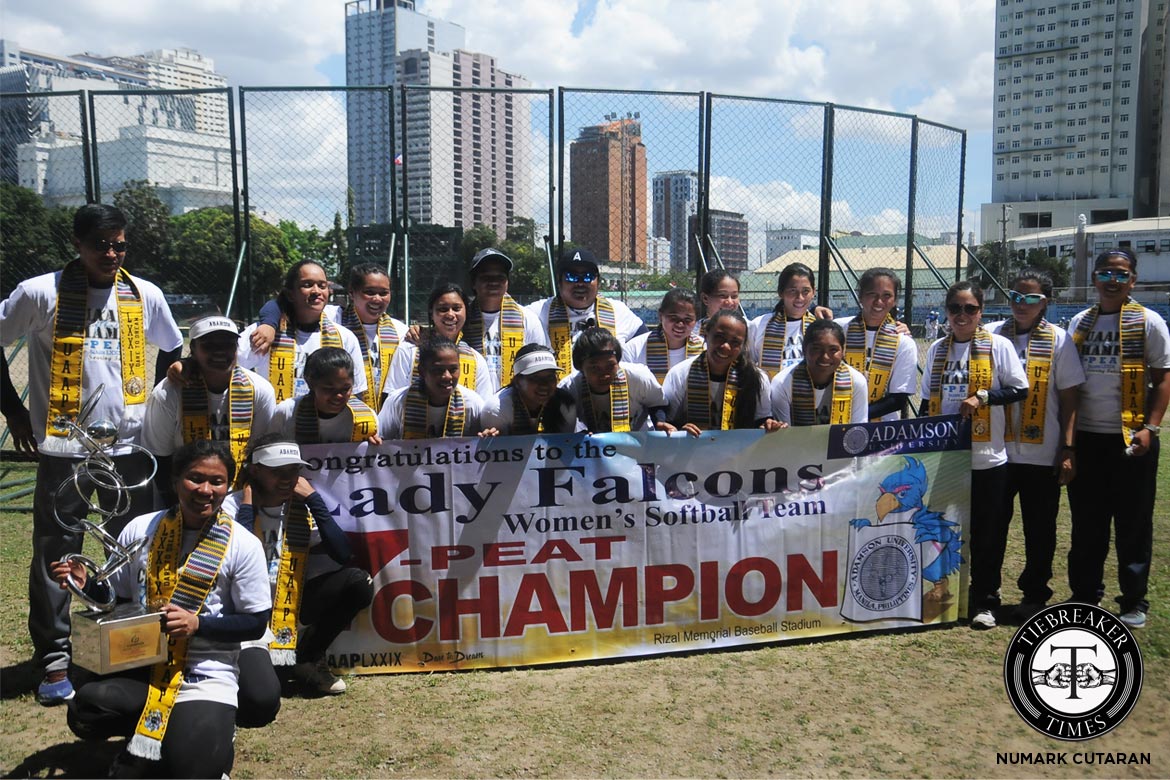 Entering the season, the fabled Adamson University Lady Falcons were just ushering in a new era — the beginning of an end to a cycle. But once the curtains of the 79th Season of the UAAP closed, they were still the ones taking the final bow.

Just like their entire season, the Adamson University Lady Falcons needed to overcome, even in the final stretch of Game Two, eventually fending off their arch-rivals University of Santo Tomas Tiger Softbelles, 3-1, to secure their seventh straight championship, Friday morning at the historic Rizal Memorial Baseball Stadium in the city of Manila.

The championship is the 16th overall crown for the lady batters of San Marcelino, while this batch of Lady Falcons finished the season with a 14-1 slate, 3-0 in the post-season.

But as dominant as their record looks, the games themselves were as close as they could get. Moreover, the Lady Falcons had entered the season with only two seniors — the remaining remnants of Adamson’s golden years that saw them streak to 73 straight wins, something that had ended a season ago.

“Importante na mag-expect kami for the worst. Hindi na ito parang dati na we can dominate the league,” Santiago furthered. “It was not an easy path for us. I think one key para manalo kami is lumaban sila hanggang huli. Puso at isip yung lalaruin nila.”

Adamson drew first blood in the game. With Mallows Garde starting in the place of injured UST ace Ann Antolihao, Gelyn Lamata was hit by a stray pitch during the second inning, while pinch runner Chrystal Yamut was able to punch in the first run of the game.

Another error, this time by the UST fielders in the fourth inning, doubled Adamson’s lead. A fielding error by shortstop Lea Guevarra gave Dely Covarrubias base while a huge double by Nichole Padasas later on brought the runner home.

But even with ace pitcher Ann Antolihao out, the Tiger Softbelles did not go down without putting up a gallant stand.

With two outs at the bottom of the fourth inning, Riflayca Basa walked Garde. Basa then gave up her first hit of the game afterwards, a triple by CJ Roa, to bring home the graduating senior.

Covarrubias was able to give Adamson an insurance run at the top of the seventh, bringing home Ursabia with a single. UST though gave one last stand, Arrielyn Areglado connected on a two-out triple. However, Basa and the Adamson fielders were not to be denied as Jessie Belano’s fly directly went down to Lorna Adorable as the celebration began.

And it was Basa, the anchor of Adamson’s defense, who made it all happen as she just allowed a total of three runs in the two Finals games. After looking for a dominant pitcher for the entire season, Santiago may have just found her main woman for the next.

Basa was crowned as the Finals MVP after only allowing just three hits in the game while striking out eight batters.

Ursabia, who played her final UAAP game, went 2-of-4 in the game for one run. Covarrubias and Padasas had an RBI each.

For UST, Garde and Rachel Secor will graduate.