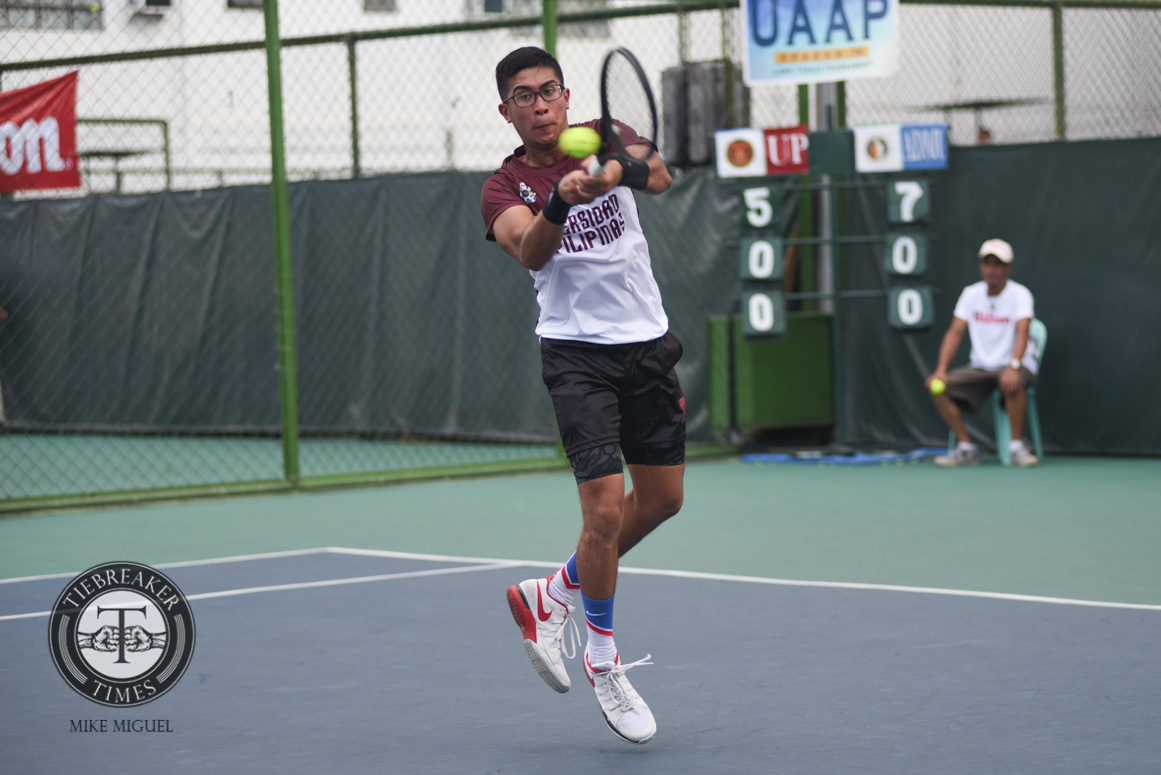 Last season’s runners-up University of the Philippines finally got over that hump.

Having lost key players from last season, their two setbacks to start the season were a hard pill for UP to swallow. Cano shared, “The two losses did a number to us. We had to keep [being] positive.”

Nonetheless, the senior Sports Science major recalled a similar start last season. So, he said, referring to a winning run, “We can do it again.”

The team responded well to the challenge; Cano started it off with a dominant 6-2 win in the first set of the first singles match over Marcen Gonzales. On court 1, Atienza also took a 5-3 lead in the opening frame of the second singles match against Julian Dayrit.

Ateneo then made their moves, getting even in the first doubles match in straight sets. Erj Gatdula and Luke Flores continued to impress as a pair after dominating Kyle Joseph and Elijah Arevalo, 6-2, 6-2.

Dayrit eventually took the first set over Atienza at 7-5, ending with a consolidated break. This happened as Gonzales also controlled their own second set and won it at 7-5 over Cano.

But Cano would take no more losses, and summoned his Finals experience to slowly overhaul a 1-4 deficit in the third set. The Maroon said, “The moment we cling on to what’s negative in the past, we’ll stay there. So, we need that mindset that ‘We’re going to get this win.'”

With this belief, the Maroons secured their second match win of the season, as the twin towers of team captain Gabriel Guttierez and newbie Mimo Tomacruz swept Anton Punzalan and AJ Rivero, 6-2, 7-5.

It turned out this positive outlook is what drove the first-year Atienza after a sorry first-set loss.

“I let a lot of opportunities go,” the Xavier School alumnus admitted. “But I also knew that I can come back; that’s what I kept in mind.

“I am not yet finished; I can play all day. I can stay here as long as it takes.”

Eventually, Cano pulled off a huge comeback with a third-set tiebreak rout at 7-3 to put UP in the lead at 2-1. On the other hand, Atienza extended the match with a huge tiebreak win in the second set.

In the deciding set, Dayrit took advantage of the errors his fellow freshman on the other side of the court made to race to a 4-1 advantage. Atienza then played through and slowly cut down the deficit, and even took the 5-4 lead.

The Ateneo rookie then bucked cramps and limited movement to hold his service games and forced a tiebreak. But Atienza sensed blood and clinched the Fighting Maroons’ maiden win of Season 79 in another tiebreak in the third.

“Even though I am a freshman, I knew that this is my moment. That if I put everything I got into that set, I knew I can win the tie for my team,” he shared.

Ateneo’s Ino Canlas, however, would not let this tie turn into a rout, after a sweep of Mikko Ringia, 6-1, 6-2.

The Fighting Maroons (1-2) will take on the unpredictable defending champions National University Bulldogs (1-2) in a rematch of the last year’s Finals on Sunday, February 26, albeit with new lineups both.

Cano, nonetheless, hopes that UP will continue “with that same sort of belief that we had today. We have to keep on hanging on to that.”

On their part, the Blue Eagles (1-2) look to stop their own slide as they battle the University of Santo Tomas Male Tennisters (2-1) later that day.