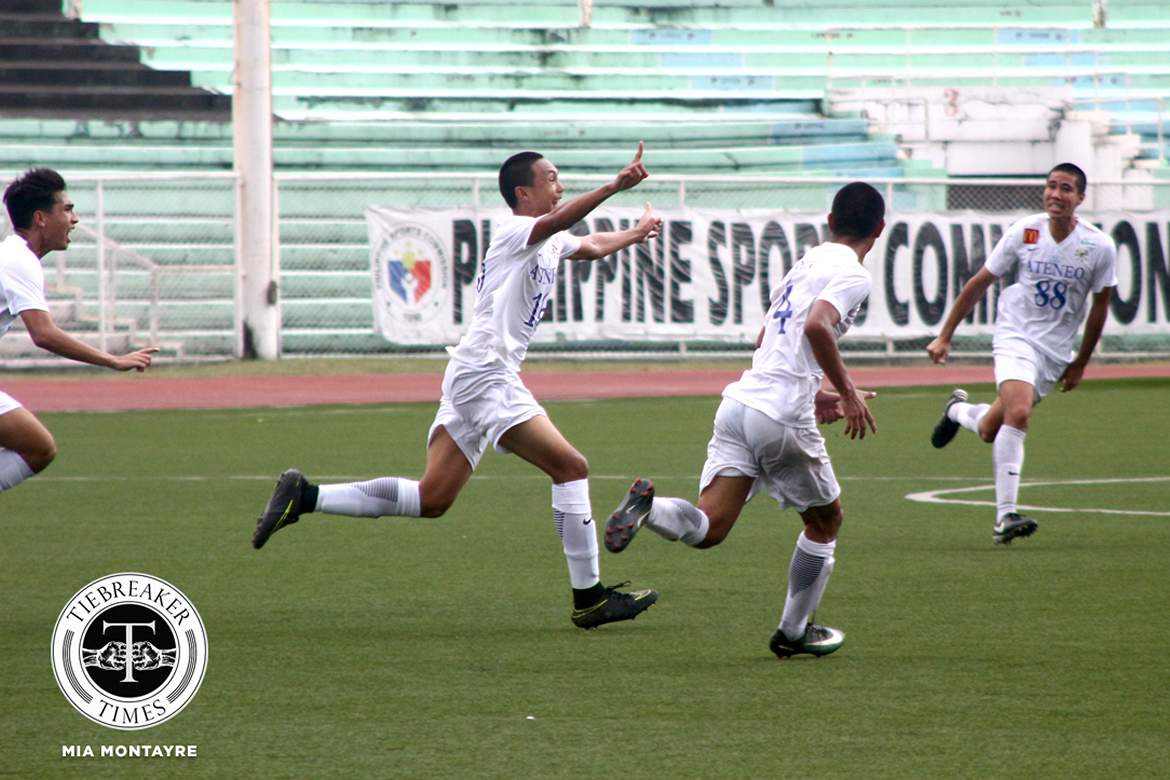 In a weekend filled with games between the University of the Philippines and the Ateneo de Manila University, the men’s football version provided yet another match to remember in Sunday afternoon’s meeting at the Rizal Memorial Football Stadium.

An entertaining encounter between last year’s finalists Ateneo and champions UP finished 1-0, and was decided by a strike from rookie Enzo Ceniza to keep the Blue Eagles’ rampant start to the season.

Ateneo, now six points clear of the second-place Far Eastern University Tamaraws, had to weather a first half storm in order to deliver the knockout punch in their revenge game against the Fighting Maroons, who had dealt them a 4-1 loss in the finals last season. As a result, UP remain in third with 10 points following a 3-1-1 win-draw-loss slate.

The winner shocked the reigning champs who may have felt hard-done-by the loss. A Jarvey Gayoso cross from the left was only cleared towards Ceniza, who had to contend with teammate Jonathan Jarvis before drilling a fine effort beyond UP Goalkeeper Ace Villanueva’s reach.

Prior to that, UP seemed to be the more likely team to net the first goal. Particularly in the first half, as the Maroons bossed the game reminiscent of their 4-1 triumph over Ateneo last May.

Early on, there were plenty of opportunities for the formidable Maroons to score; the first two of which came from a decent pair of half-chances in the 7th minute. Off a Kyle Magdato cross, Daniel Gadia collected the ball but took too long to release a shot, allowing Ateneo to get numbers in front of him. The captain’s shot then trickled out and was cleared to Sean Patangan, whose attempt was also blocked by the Ateneo defense.

UP looked more deadly in open play situations than in dead-ball opportunities. Playing aggressively inside Ateneo’s half, the Maroons won a handful of promising free kicks. But the best they could produce was a Marco Casambre free kick that went off-target, midway through the first half.

In open play meanwhile, Coach Anto Gonzales’ players had their opponents on their feet. Through it also came their best chance of breaking the deadlock. Unfortunately for the rowdy Maroons backing their team, a golden chance came begging in first-half added time.

King Miyagi placed a decent through-pass that set Magdato up in a one-on-one situation with the Ateneo goalkeeper AJ Arcilla. The winger thought of chipping the ball above the imposing shotstopper, a nifty idea he just couldn’t pull off as the ball didn’t fall soon enough to find the back of the net.

Eventually losing to Ateneo did not disappoint Gonzales, who lauded his players’ effort in the opening 45. “Sa objectives namin, I think checked lahat. Tactical discipline, patience in attack, we could have probably scored at least a goal and that could have changed the complexion of the game,” he surmised.

He did concede that the Maroons need to be sharper in the final third moving forward. “Right now ang nagiging problema namin is how to break down an organized defense,” he observed, noting their struggle to score against La Salle and Ateneo so far this season.

Having withstood the pressure in the first half, Ateneo made it a more competitive game in the second half. JP Merida’s wards probed the UP defense, which worked well to not only minimize the Maroons’ threat, but also allowed them to have a say in the match.

#ReadMore  Nabor hopes to have made idol Morado proud

Signs of the game shifting towards Ateneo’s favor first came in the 59th minute. Gayoso brilliantly won the ball at the edge of the box before forcing a reaction save from Villanueva

The lanky forward was at it again five minutes later. Played onside, the former Ateneo High School spotted teammate Rupert Baña on the way to the box. Unfortunately for the junior, he lost footing, as the ball was about to land. The threat did not end there, though, as Ceniza gave it another try. The rookie could only manage to send the ball wide.

Ceniza did not waste a second chance that was about to come, but before his heroic effort came two decent attempts to break the deadlock in UP’s favor.

The first of those happened in the 66th minute when Miyagi received Miggy Clarino’s clever diagonal ball. The sophomore was on track to score as his boot made a contact with the ball. It wasn’t a meaningful one, however, as the Ateneo defense cleared the ranger away.

A minute later, Miyagi did well to shrug off his markers to curl the ball into the top corner. As the ball approached the goal, it drifted agonizingly wide to the relief of the Ateneo players. It was as close as UP got in the end, as Ceniza’s third goal of the season changed the game altogether soon after.

It almost became a 2-0 lead for the Blue Eagles, had Gayoso converted an ill-conceived chip after he won the ball from two UP defenders.

Desperate to regain parity before full time, the Fighting Maroons piled the pressure late in the game. Despite all of their efforts, they couldn’t truly test Arcilla, whose commanding presence between the sticks preserved a clean sheet en route to a magnificent victory against the Season 78 title winners.

After the match, Merida hailed the ‘unbelievable’ Ateneo players. “‘Yung adjustment namin sa second half talagang sinunod nila yung game plan. Siguro ‘yun ‘yung dahilan kaya nahirapan UP. It’s hard to play UP but when they (Ateneo) play their best, talagang kaya nila [manalo],” the Ateneo head coach said after the Blue Eagles had absorbed the immense pressure UP produced in the first half.

In what many see as a finals rematch, Merida begged to differ, as he attributes the win to the realignment of mindset in the Ateneo camp. “Sabi ko nga sa kanila, this is not a rematch. Another season ‘to. We’re not here to avenge Season 78 finals. We’re here to enjoy Season 79, to work together and follow the game plan [by] playing as a team,” he shared. Indeed, the Blue Eagles are having fun on top of the standings almost halfway through the season.

Having played six games already, the last year’s runners-up will take an 11-day break before they collide with the also-undefeated Far Eastern University team. That game will be played at the Moro Lorenzo Football Field in Ateneo. A week before that, UP will look to bounce back from their first loss of the season when they also play against the Tamaraws in the same venue.