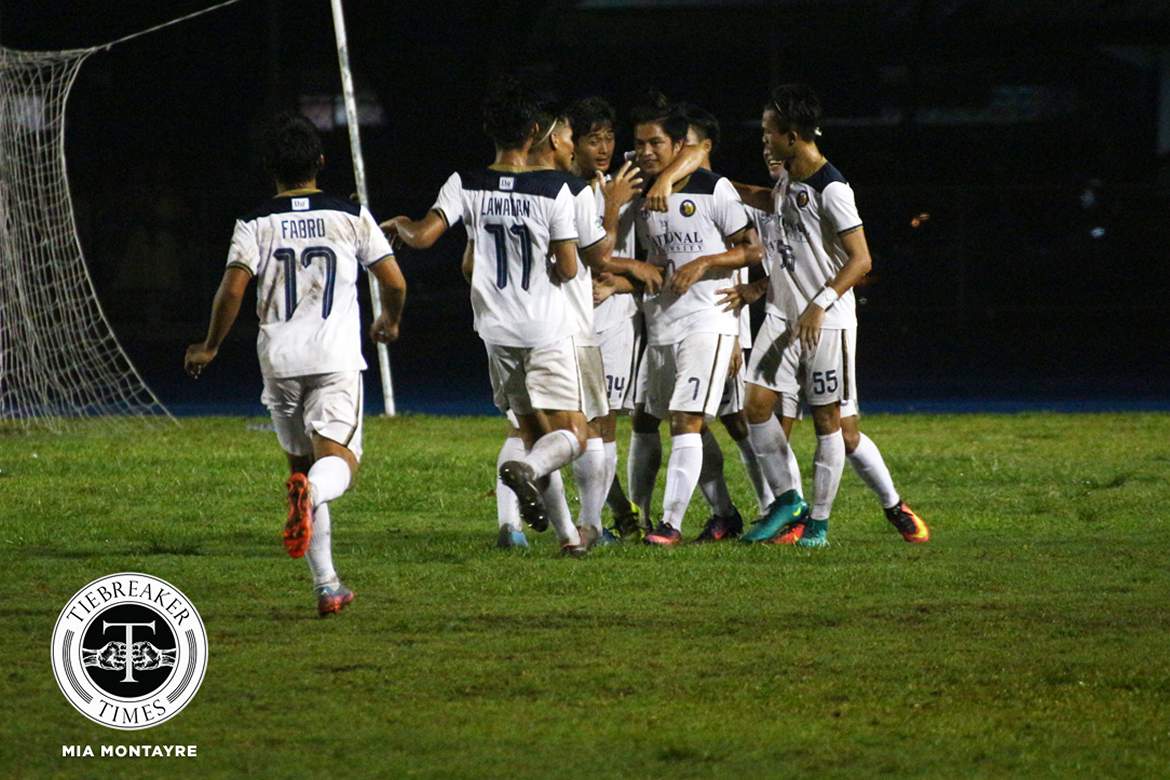 “We knew there’s no chance [for a Final Four spot], so it’s just good to end the season with a win.”

Those are the words from National University Bulldogs head coach Mari Aberasturi, and so the Bulldogs did just that, closing their season with a rousing upset of the defending champions and semifinals-bound University of the Philippines, 2-1, Thursday evening at the Ateneo de Manila University Moro Lorenzo Field.

The Bustillos-based squad started on the right foot, continuously pressing the tentative defense of the Maroons. The Bulldogs used the heavy downpour to their advantage, although some of their shots went wayward.

It was in the 36th minute that National U finally got their reward, getting a break they really wanted.

Mike Arbela received a pass from the flank before meeting State U goalkeeper Ace Villanueva. The fifth year UP custodian tried to clear the ball, but mistimed his run, giving the former ample space to slowly guide the ball into the net.

The reigning champs were not devoid of chances, but shots from Rvin Resuma went straight to the hands of Chris Perocho. Those saves kept a clean sheet in the favor of Bulldogs at the half.

Needing the win for a fitting send off to the post-season, UP head coach Anto Gonzales fielded in his sophomores Kintaro Miyagi and Sean Patangan at the second half.

The striking force of the Fighting Maroons hastened the pace in their favor, and slowly the offense clicked. Finally, in the 62nd minute, Patangan — with plenty of options on the ball — launched the ball into the onion bag for the equalizer.

Miyagi also had his chances thereafter, but again Perocho was there to deny the shots. Soon enough, it was the Bulldogs’ turn on the counter attack.

Substitute Jacob Gomez pressed for a chance at the flank in the 72nd minute, which John Abraham tried to cover for Villanueva. However, the usually reliable keeper fumbled once more, leaving the ball to roll past him and into the goal for another NU lead.

Both teams tried to go for more goals, but the score stood after 90 minutes.

Aberasturi looked back into their woeful stretches of the season, but hopes that his players have learned their lesson from the experience, saying “Yung season ngayon, we had our chances. Pero hindi namin kinuha eh. Yun na lang yung mapiga mo sa players.”

The Bulldogs finish in fifth place with 19 points. The defending champions Fighting Maroons (28 pts) will try to bounce back from this sorry loss as they face the struggling Far Eastern University Tamaraws (22 pts), on the following Thursday, May 4, at the Rizal Memorial Football Stadium, 5:00pm, for the semifinals.