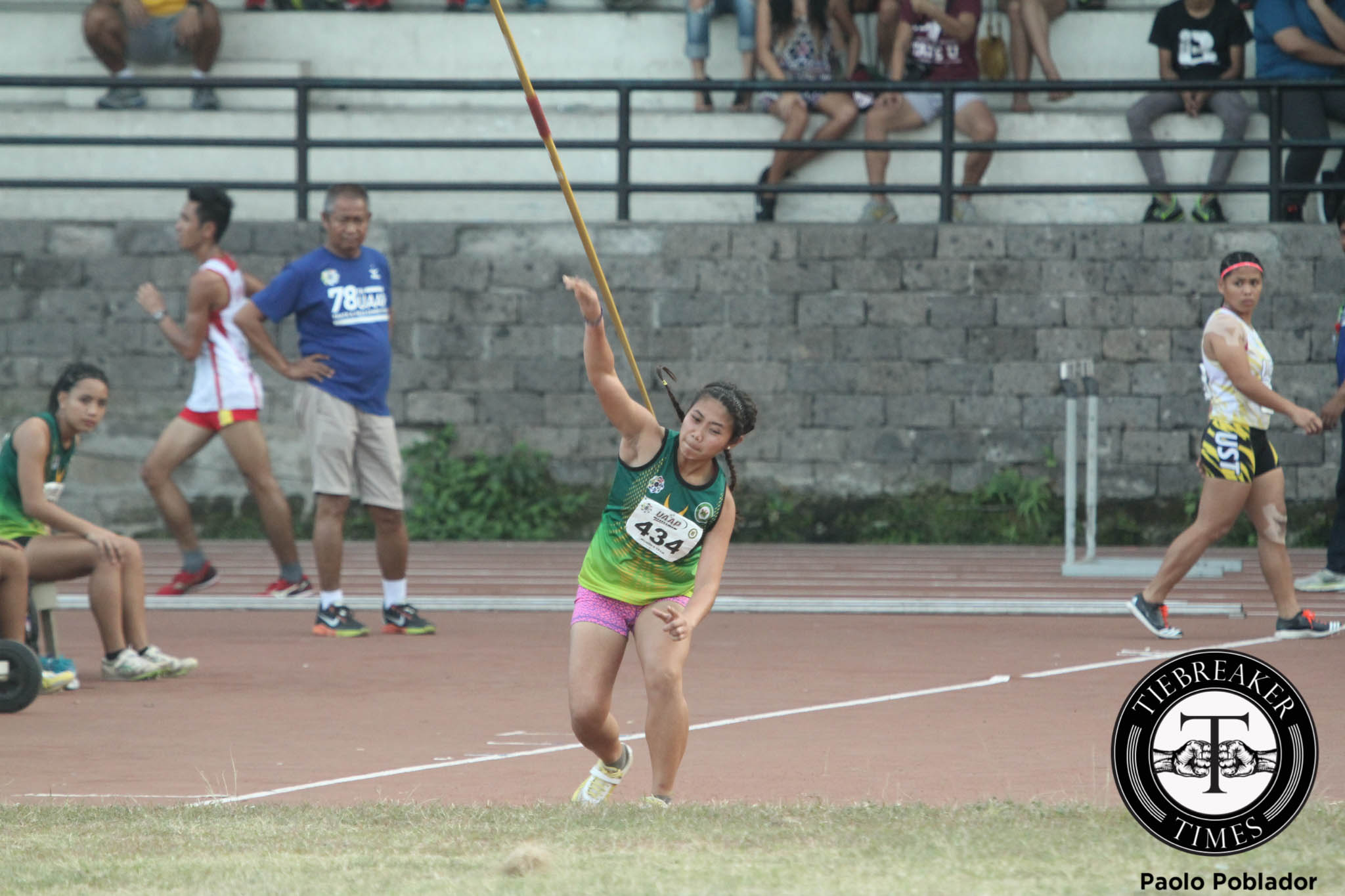 After numerous gold-silver-bronze finishes, it is already clear that the University of Santo Tomas (UST) are in pole position to win the overall championships. They seek to obliterate the point rally even further by scoring more points in the last remaining events. The University of the East (UE) and the Far Eastern University (FEU) continue to try and maintain the momentum and power for that spot behind UST.

The 400m hurdles heats had small variances within the qualifying times. There were three crowd favorites going into the race, but with nobody assured of the gold medal.

FEU’s Mary Avila ranked first in the qualifying round with a commanding 64.21 second quarter-mile hurdle race performance. Having had a good season thus far, UST’s Michelle Loterte also qualified behind Avila with 65.48 seconds. Trailing closely behind her was DLSU’s Judy Rendora with 65.58 seconds to show.

The crowd favorites did not disappoint in the finals. All three maintained their positions from the qualifying rounds to the podium finish, although with faster times. Avila managed to edge out Loterte by over 0.2 seconds, with 63.02 seconds for the gold. Loterte ran a solid 63.22 seconds for the silver, steering clear of Rendora, who only managed to improve her time by 0.04 seconds, clocking 65.54 seconds in the final.

UE’s Macrose Dichoso managed to translate her 5000m win up to the 25-lap 10000m run by clocking 39:18, asserting her dominance in the distance event after overlapping the silver medalist and being the only woman in the track to clock a sub-40 minute run. Compatriot and silver medalist Cellie Jaro only managed to clock 41:16, over two minutes behind her first place finishing teammate. 3000m steeplechase gold medalist Joida Gagnao for FEU settled for bronze in the 25-lap event with a time of 41:53.

The only field event of the day, apart from the women’s heptathlon, was the shot put. Defending champion Dianne De Jesus of UE set out to win the crown again and improve on her gold medal throw of 11.65 meters from last season.

De Jesus did improve on her throw after registering 11.77 meters. However, in this UAAP, it was only good enough for a silver medal finish, as FEU’s Joy Garcia set a new UAAP record of 12.35 meters, more than half a meter away from the silver medalist. Much like last season, Riza Sombilla of UST trailed behind De Jesus with a throw of 11.59 meters. However, she would have to settle for bronze this year, unlike her silver medal win from last season behind De Jesus.

Coming in as the overnight leader was UP’s Marianne Yorac, trailed by last year’s silver medalist Sarah Dequinan of UST.

Winning the long jump was Dequinan’s teammate Judy Almasa with a jump of 5.34 meters. Dequinan came in second with 5.27 meters, finally overtaking Yorac, who only managed to place fourth with 5.10 meters. FEU’s Josefa Ligmayo trailed behind Almasa, however, only managing to jump 5.03 meters.

Come the javelin throw, Dequinan extended her lead over Yorac by throwing an impressive 40.71 meter distance in the javelin. Yorac tried to hold on but her 25.44 meter throw would mean the run of her life in the 800m later that day. Ligmayo threw also a commanding 31.89 meters to secure a lead over Almasa. However, Almasa had a stronger 800m over Ligmayo, so Almasa would, like Yorac, try to run the fastest 800m of her life to win the bronze.

As was predicted, Almasa from the start secured her lead over Ligmayo to try to chase down the point gap. She ran an impressive 2:35.26 to place first in the 800m, but fell short after Ligmayo finished with 2:42.67. With Ligmayo’s run, she secured a 3-point lead over Almasa in the final point tally by scoring a total aggregate score of 4035 points.

Yorac tried keep pace Dequinan in the 800m but her chances started slipping as Dequinan pulled away. Dequinan finished comfortably with a commanding 500-point lead over Yorac in the total aggregate computation after scoring 4507 points. Yorac had to settle for silver after her javelin upset with a score of 4066 points.