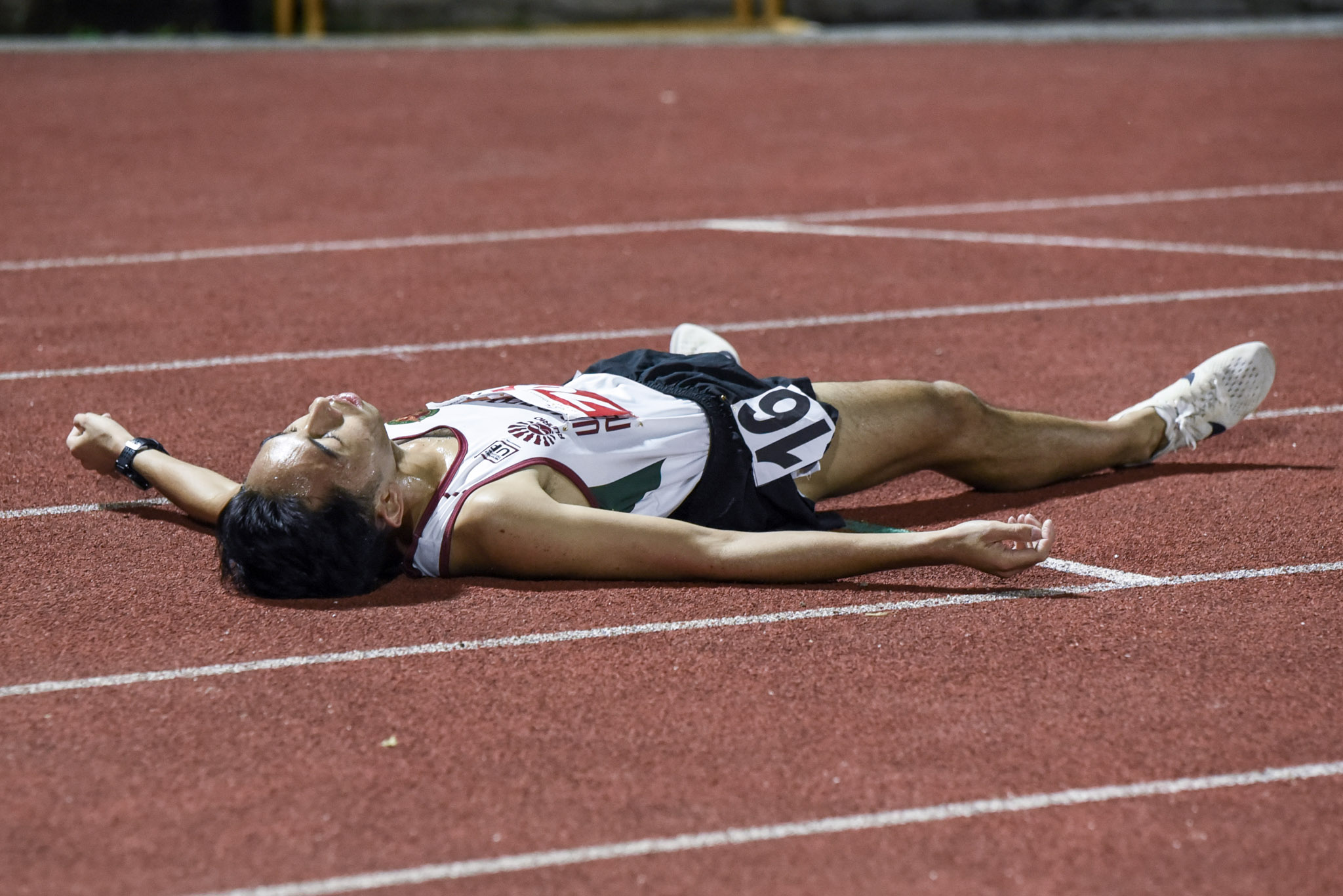 Eduard Josh Buenavista and the rest of the defending men’s champion University of the Philippines pulled away from the competition on the third day of the UAAP Season 85 Athletics Championships, Friday at the Philsports Oval in Pasig City.

With 227 points, UP has widened the gap against its closest pursuer Far Eastern University, which remains in second with 168.

Buenavista, who hails from South Cotabato, added the 5000m to his collection of golds after smashing yet another UAAP record in the event. The Fighting Maroon set a new mark at 15:16.37, surpassing the previous one of UST’s Ben Alejandrino at 15:21.6 in Season 69.

All three medalists actually finished ahead of Alejandrino’s mark with UE’s James Orduna and UP’s Eduard Flores stopping the clock at 15:20.37 and 15:21.54, respectively.

Perennial champion University of Santo Tomas, on the other hand, narrowed the deficit in the women’s division from current leader De La Salle University to 16, 200-216, thanks to its two titles in the pole vault and the 1500 meters. 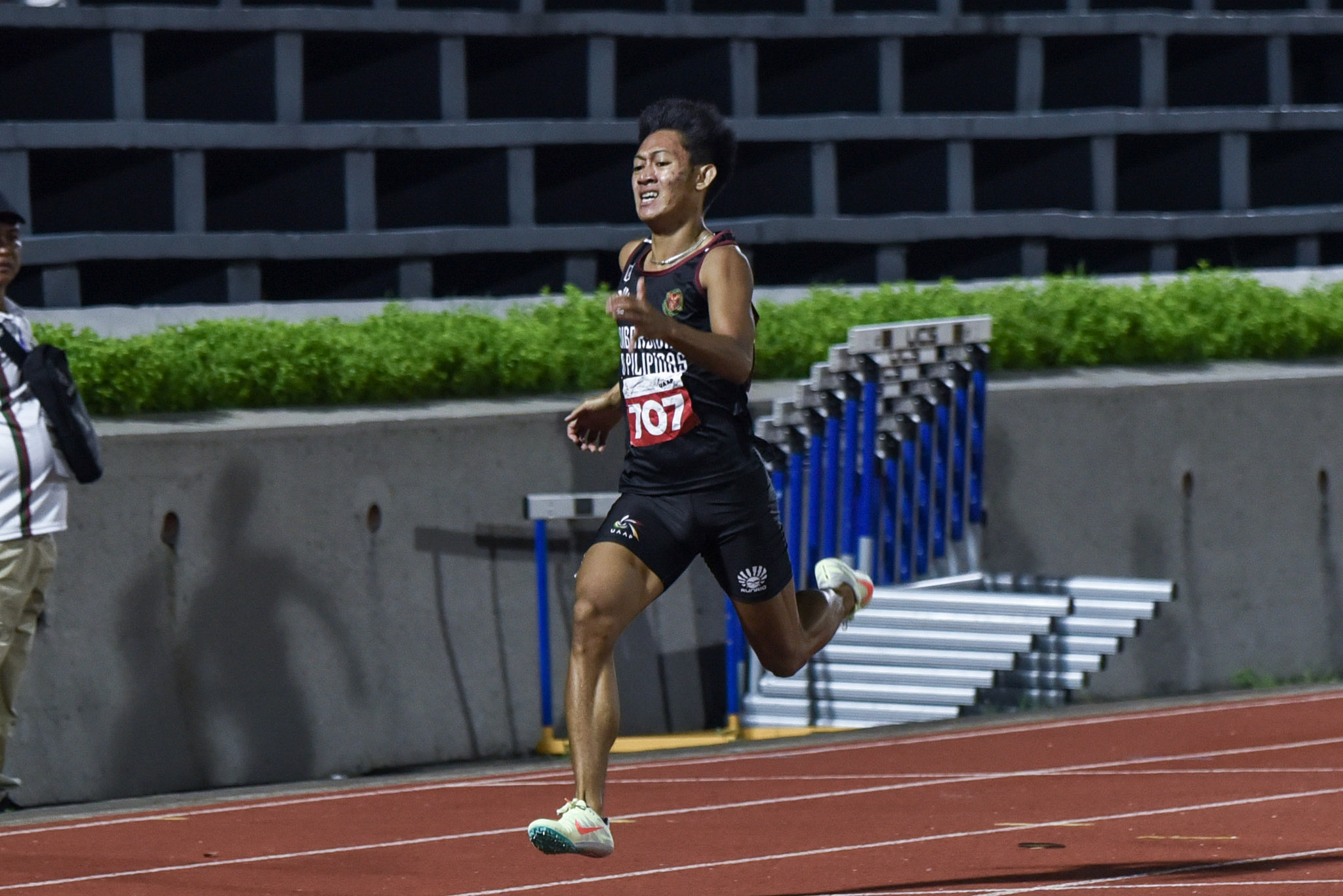 UP men’s Rhyan Labita, on his part, completed the sprint treble of 100m-200m-400m for the Fighting Maroons with the gold in the latter. The UP rookie won as determined by the photo finish apparatus over Adamson University’s Edgar Carado, as they both finished with 48.94 seconds. Edwin Giron, also from UP, got the bronze with 49.57.

Labita then went on to kickstart the 4x100m relay team of the Fighting Maroons to the gold with teammates Clint Neri, John Carlo Yuzon, and Gene Ordinario with a time of 42.54 seconds. UST’s Johnpaul Araneta, John Romero, Baxter Aromin, and Romel Bautista ended with the silver with 43.17, while Feberoy Kasi, John Cresencia, Jestony Magarzo, and Allen Mationg snagged the bronze with 43.42, just 0.05 ticks ahead of University of the East.

#ReadMore  With Jerom Lastimosa being a marked man, Nash Racela calls on rest of Adamson to step up

Former seven-peat champions FEU also got on the board with a gold in the triple jump to go to 168 points in total and to maintain second place in the standings. 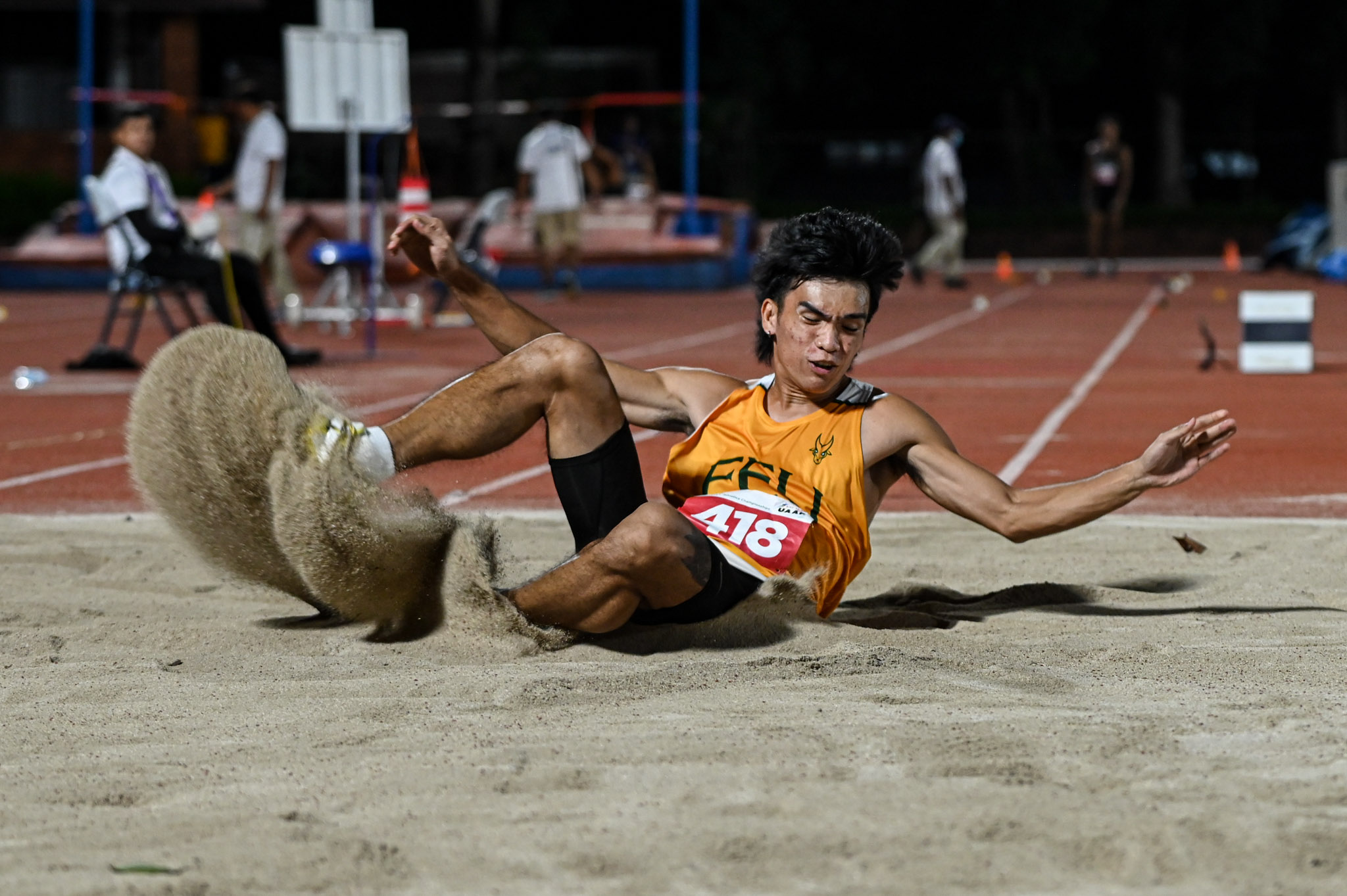 John Rafols got his second title of the season to go along with his long jump win, after registering a jump of 15.24, way ahead of silver medalist UP’s Neri with 14.65. Aldrin Custodio of NU took the bronze with 13.92.

Kent Domido broke through with UST’s first gold of the season, winning the javelin throw with a throw of 56.58 meters. Adamson’s Charlie Tiano and Dexter Pascua completed the podium with 54.35 and 52.63, respectively.

The Bulldogs remain in third place with 136 points, while the Soaring Falcons and the Tiger Tracksters moved to fourth and fifth, respectively, with 90 and 86 markers. 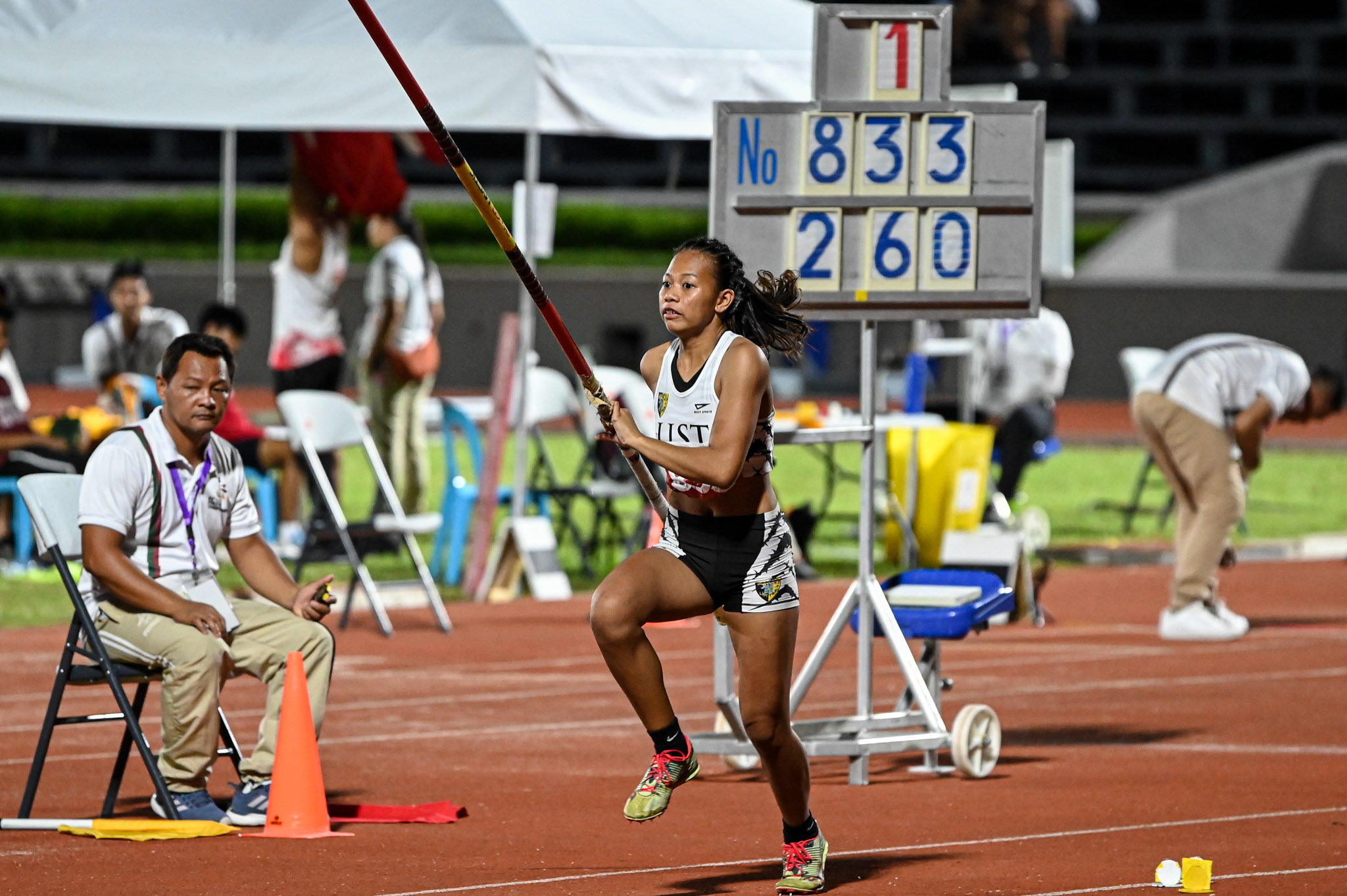 UST made moves on the women’s side with Khrizzie Ruzol taking the pole vault gold with a height of 3.25m ahead of Ateneo de Manila University’s Jiamari Kawachi with 3.10 and UE’s Mecca Cortisano with 2.95. 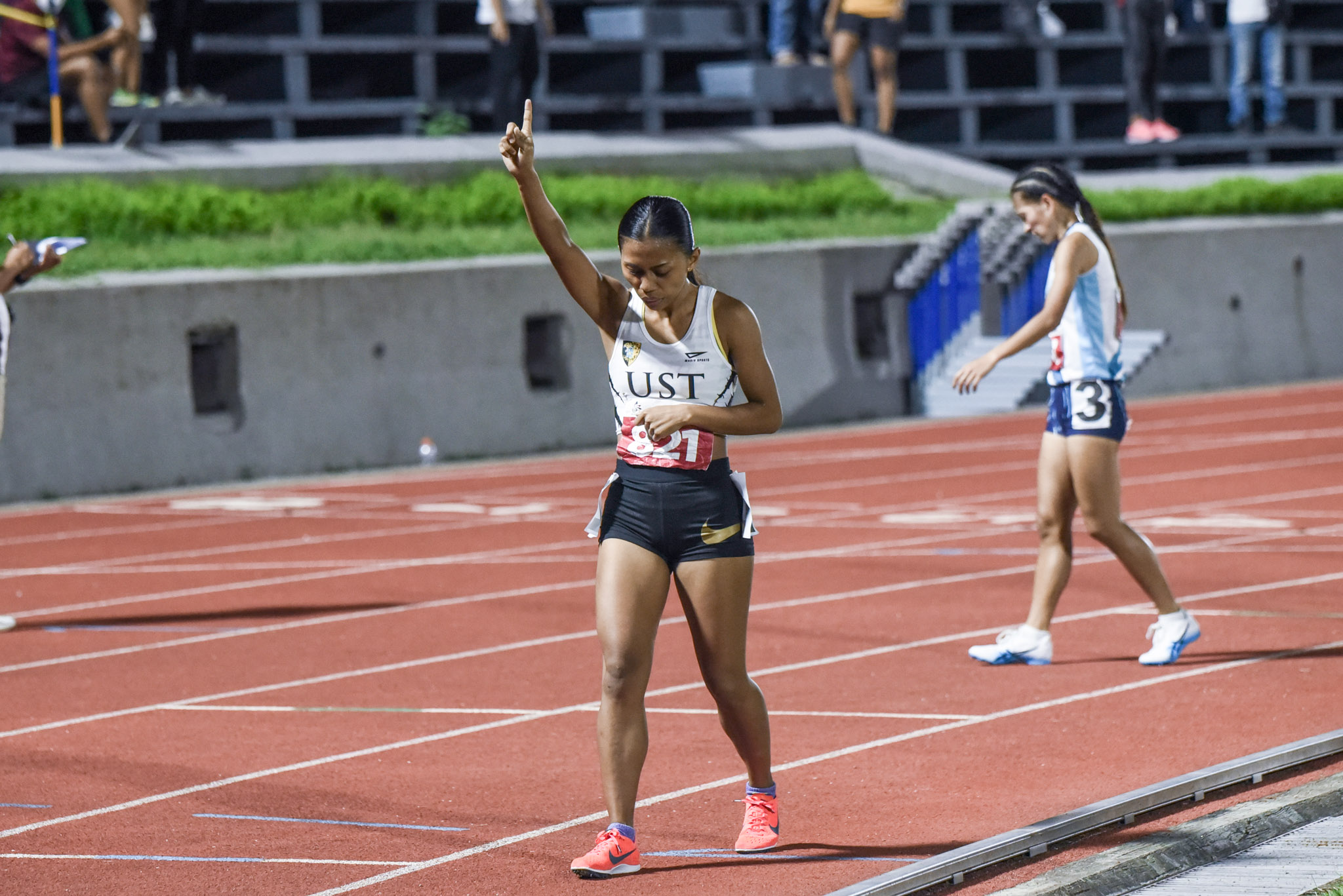 La Salle, though, collected three golds to keep its slim lead heading into the final stretch of the competition, highlighted by a 1-2 finish in the discus throw.

Daniella Daynata kept her discus title with a successful throw of 42.16 meters ahead of fellow Lady Green Trackster Franz Bintad, who came in a distant second with 38.88. NU’s Jane Cambriga picked the bronze with 35.03.

Bernalyn Bejoy annexed her second title of the season with a victory in the 400m with 56.55 seconds, which is almost two seconds ahead of UP’s Marisol Amarga with 58.31 and UST’s Jessa Mae Jarder with 58.61.

The quartet of Trexie De La Torre, Hannah Delotavo, Erica Ruto, and Jessel Lumapas closed the day for La Salle with a time of 47.62 for the gold in the 4x100m relay to keep the team’s head above waters in the overall championship race as UST just finished eighth with 1:00.82.

The Fighting Maroons maintained its third-place ranking on the women’s side after three days with 130 points, with Sally Campus taking her second UAAP gold in the 3000m walk.

The Lady Bulldogs kept their fourth-place ranking with 103 markers, while the Lady Red Warriors were at fifth with 84.

The fourth day of the competition starts is set for Saturday.