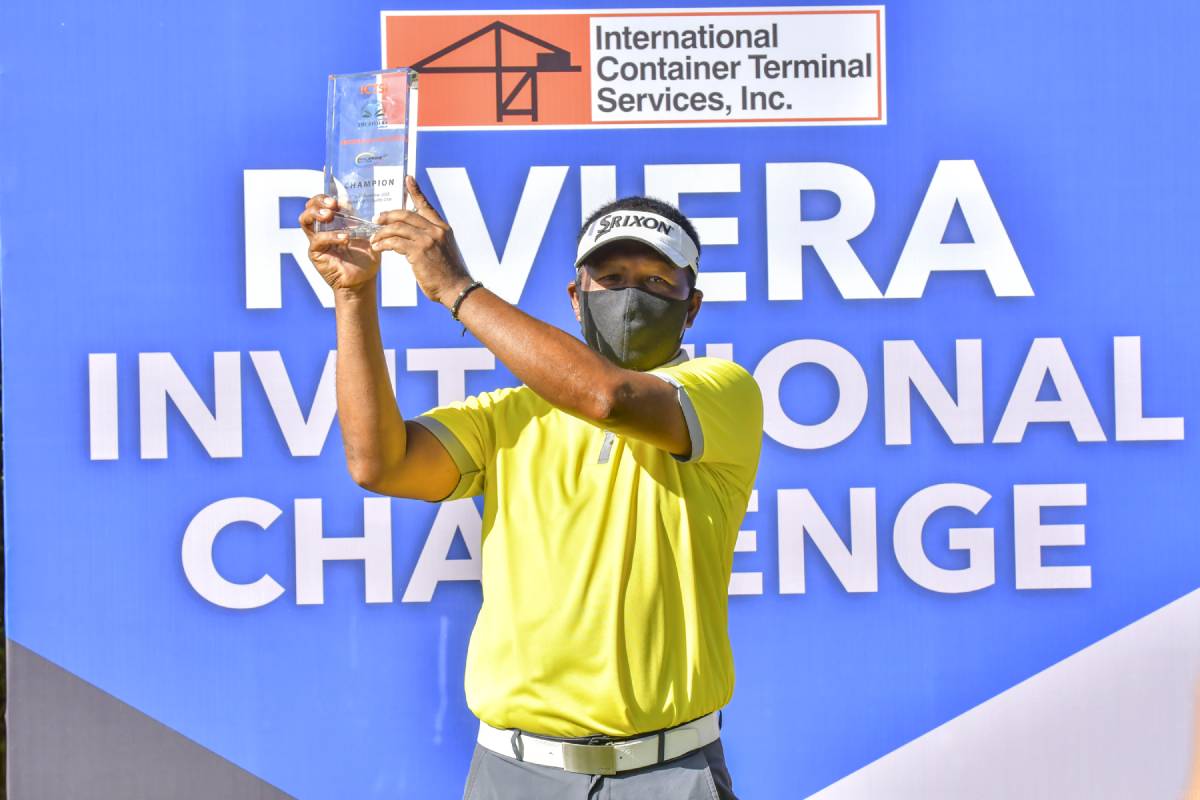 Tony Lascuña kept the momentum of his third round assault and made it a virtual routine in Philippine Golf Tour’s return in the new normal, ending up on top again after beating Ira Alido and Rupert Zaragosa by four on a 68 in the ICTSI Riviera Invitational Challenge at the Couples course in Silang, Cavite on Friday.

The multi-titled Lascuña broke away from a tied duel with Zaragosa with birdies on Nos. 3 and 6. He then pulled away with three more birdies in the first four holes at the back to claim another championship, after closing out PGT’s milestone 10th season last year with back-to-back three-stroke title romps at Apo and South Pacific in his hometown Davao.

“It’s so nice to win again but nicer for us to finally have a tournament to play in,” said Lascuña, the most dominant player in the circuit with four Order of Merit titles. He pooled an 8-under 280 and pocketed the top P350,000 purse.

“It’s been a long time since we last competed, and we could only thank ICTSI and the Pilipinas Golf Tournaments, Inc. for giving us the opportunity to play competitively again,” he added.

After a pair of mediocre rounds (71-72) coming off a long layoff, Lascuña found his bearing and rhythm. He shot a bogey-free 69 Thursday to tie Zaragosa on top, then sustained his charge with those closing five birdies and a couple of scrambling pars. A bogey on the 18th, however, ruined what could’ve been a remarkable unblemished run in the last 36 holes.

But the last-hole mishap hardly mattered for the veteran campaigner, who stayed physically active during the lockdown. He also spent the long break teaching and training at the Manila Southwoods when quarantine restrictions eased up in May.

#ReadMore  How did Lyceum recover from first loss? By giving back

His imposing victory should likewise make him the marked man when the second and last PGT tournament in the pandemic-hit season takes place from Dec. 8-11 at the adjacent Langer layout along with the 54-hole Ladies PGT championship, headed by Thursday’s winner Princess Superal.

Alido rallied with a three-birdie binge from No. 11 and shot a 69 and earned a share of second at 284. Meanwhile, Zaragosa — who surged ahead in the second round of the P2.5 million event put up by ICTSI — bogeyed the last two for a 72. Each received P187,500.

Former Philippine Open champion and many-time PGT and PGT Asia titlist Angelo Que snatched fourth place at 285 worth P110,000 after a 67 in a surge that came a bit late for one of the fancied players in the fold. Justin Quiban also sizzled late, producing the tournament-best bogey-less seven-under 65. He ties first round leader Joenard Rates, who faded with three backside bogeys for a 74, at fifth at 287. Each received P103,105.

Fidel Concepcion shot a 71 and shared seventh place at 288 with Miguel Tabuena, the two-time Phl Open champion who had failed to really get going after an opening 71, finishing with a second 72.

Dutch Guido Van der Valk, winner of this year’s The Country Club Invitational before the Covid-19 outbreak disrupted play, matched par 72 for ninth at 289 while Jay Bayron and Michael Bibat tied for 10th at 291 after 71 and 72, respectively.