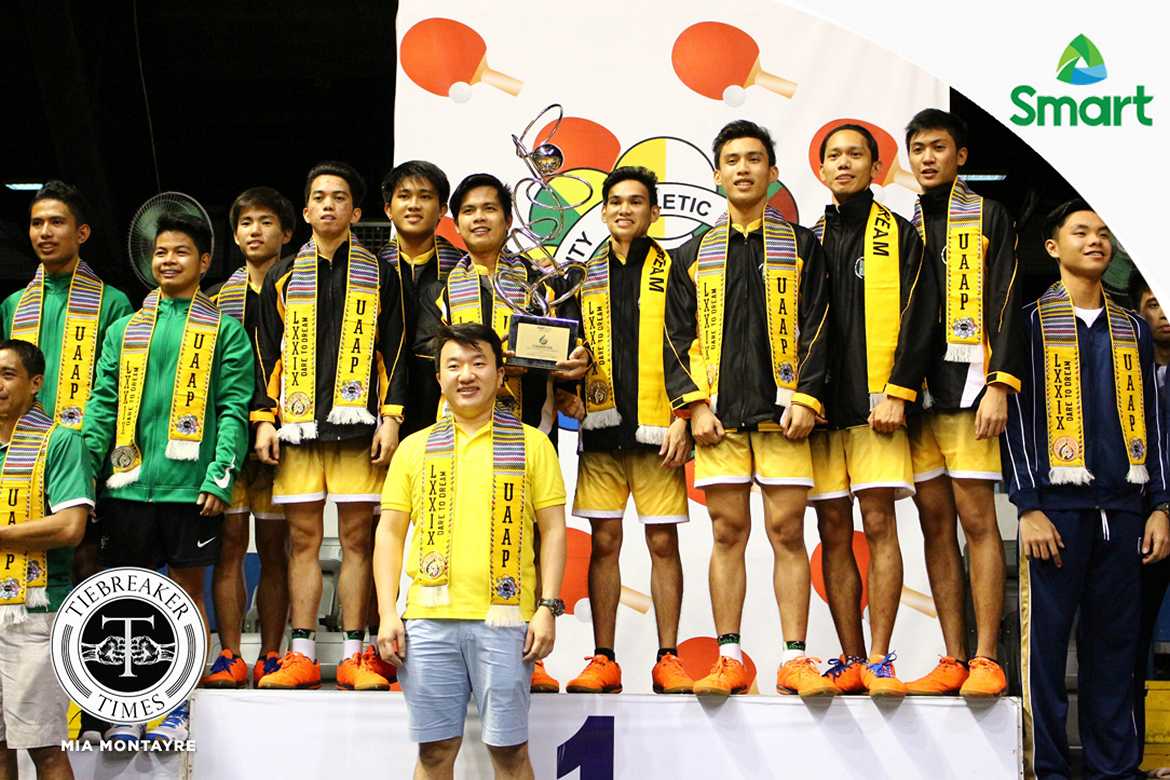 Some good things must come to an end, while some must be rekindled.

After defending champions De La Salle University Green Paddlers made history as the first sixth-seeds to enter the Finals of the UAAP men’s table tennis tournament, winning five straight do-or-die ties in the process, the run was eventually stopped by a hungry pack of Tigers.

The University of Santo Tomas Tiger Paddlers completed a 16-0 sweep of the season after dominating DLSU in two ties, en route to ending their three-year title drought, Wednesday, at the Blue Eagle Gym.

Going into the day, team captain Norielle Pantoja described the Tigers as a picture of focus.

And this focus was evident right in the very first tie.

The clean sweep started with a rousing win in the first tie.

Gil Ablanque swept Tarak Cabrido in the first singles match. Despite the persistence of Cabrido, the Thomasian’s composure prevailed at the end of the three sets. UST took the opener at 11-6, 11-8, 11-7.

Adolfo Bazar then followed this up with thorough mastery of senior Green Paddler Jeremy Ruiz. The lanky Tiger Paddler shrugged off the increasing confidence of the latter as the match progressed. Bazar finished off the match, also in straight sets, 11-4, 11-6, 11-7.

Pantoja and partner Oneal Maldia were then offered resistance by rookie Nathan Siasico and Ralph Nones. After the Thomasians nosed their opponents out in the first set at 11-8, the Taft-based duo threatened to take the second after getting to the set point first. Nevertheless, Pantoja and Maldia closed out the set at 12-10, and then took the third at 11-7, to clinch the win.

The skipper and his partner has put UST on the verge of the winning the crown.

Tiger Paddlers roar, give back crown to Espana

The Thomasians had suffered for three years, and for a proud program it is too long of a wait.

The drought, however, finally ended as the Tiger Paddlers reasserted their mastery of the Green Paddlers and underlined their domination of the season with another nine-set sweep.

Ablanque once again started the rout with another straight-set victory. This time, the España paddler waylaid DLSU newbie Edmar Eder to the tune of an 11-2, 11-5, 11-8 score line. Ablanque was dominant in the first two sets, but Eder took some lease of life in the third. The Thomasian eventually regrouped to take the third frame and the match.

That was also the same case in the second singles match. Playing his final UAAP game, Ruiz gave it all against Bazar, but he came up short of giving DLSU a win. In the end, the desire of the latter showed more resulting to another UST win at 11-9, 11-5, 12-10.

Pantoja and Maldia then breezed past Siasico and Nones in the first two sets of the lone doubles match at 11-5, 11-7. The Tiger Paddlers threatened to pull away late in the third set and even reached match point at 10-6 forcing La Salle to call for time. Two consecutive errors from UST put the opponents to within two at 8-10.

Nevertheless, Pantoja found some space and sent a slice towards La Salle’s end, which Siasico returned but went straight to the net.

With that forced error, the wait is finally over and the title was back in España.

Skipper and eventual Most Valuable Player Pantoja shared his pride of his team’s accomplishment.

The graduating senior also commended the performance of each member of the squad.