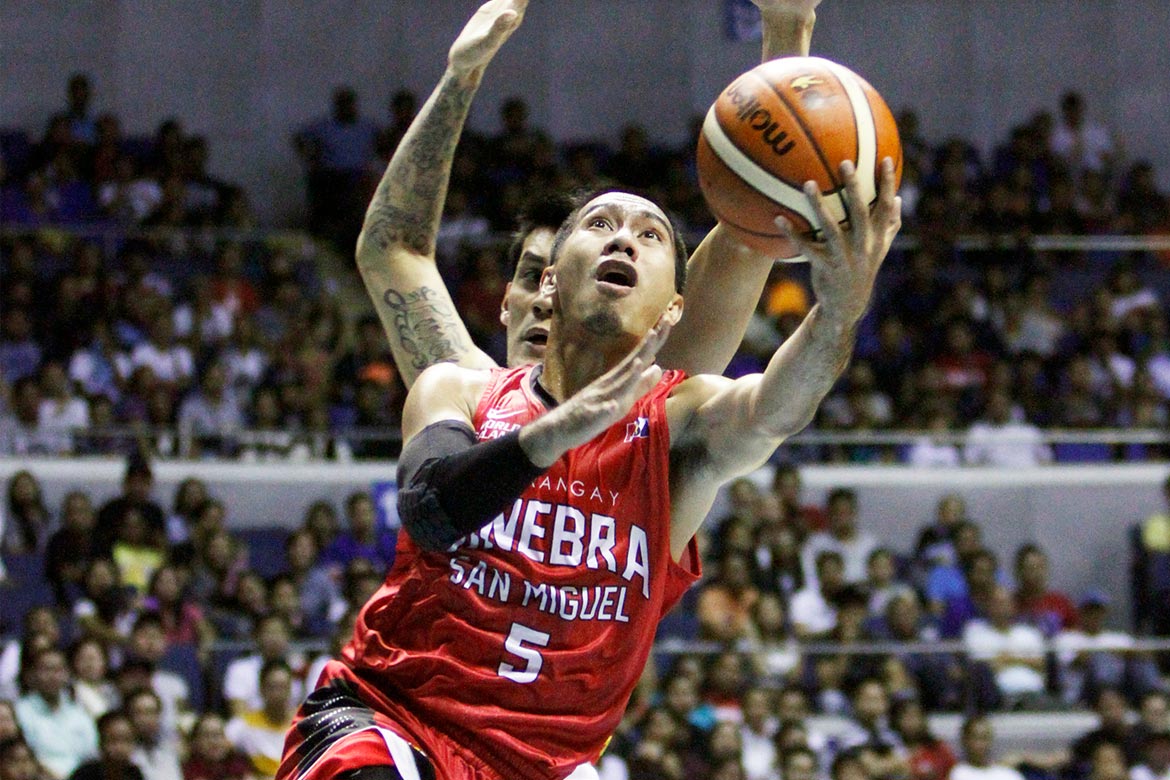 Barangay Ginebra San Miguel once again made the Barangay proud after posting an astounding 101-87 victory over Rain or Shine Elastopainters in the 2016 OPPO PBA Governors’ Cup Sunday night at the Smart-Araneta Coliseum in Cubao, Quezon City.

Ginebra ace point guard LA Tenorio was adjudged as the game’s best player, flirting with a double-double by scoring 15 points — highlighted by 3-3 triples — and dishing out 8 assists. Import Justin Brownlee had a monster game for the Gin Kings, leading all scorers with 31 markers and hauled down 13 boards.

The Elastopainters committed turnovers early in the first quarter, allowing Ginebra to run and score off their miscues and establish a wide eight-point lead, 15-7, with less than five minutes left. Rain or Shine answered back with six straight points, 15-13, behind contributions from Maverick Ahanmisi and import Dior Lowhorn, but Barangay Ginebra capped off the frame with a 10-3 scoring spree to own the first 12 minutes, 25-16.

BGSM slowed down in the next frame, which saw RoS erase a nine-point lag with a 15-0 run to snatch the lead for the first time, 31-25, approaching the eight-minute mark. Ginebra fought back, and with Brownlee catching fire on offense, the match went to a 39-all deadlock with 3:48 remaining. Ginebra concluded the first half with a 9-3 blitz to gain the upper hand, 48-42. Brownlee scored 14 in the stretch alone.

Ginebra sustained momentum in the third canto, converting a slim 52-50 lead early to a double-digit advantage, 70-60, behind Lowhorn, Japeth Aguilar, and Sol Mercado with 2:06 left. However, Rain or Shine, with Jericho Cruz, Beau Belga, and Chris Tiu chipping in points, was able to outscore their counterparts 11-5 in the final two minutes to inch within striking distance and end the quarter behind by just two field goals, 75-71.

The final chapter saw Ginebra fire on all cylinders in the offensive end. From a slim two-point lead, 77-75, with 9:02 left, Barangay Ginebra went on a rampage and posted another double-figure advantage, 89-78, with 4:04 remaining. From then on, Ginebra never looked back, not allowing any RoS comeback to happen and seamlessly coast to the 14-point victory.

“It’s been a real team effort so far,” said Barangay Ginebra head coach Tim Cone, who dedicated this particular match to the legendary coach Baby Dalupan, who recently passed away a few days ago.

“I’m honored that we were able to do this tribute and get the win. Except for my father, Coach Baby is the guy that I’d like to emulate,” he added.

The victory lifts Ginebra, who is coming off a double OT loss to San Miguel last Sunday, to a 5-2 record, tying them with Mahindra for the second spot. Rain Or Shine, who will next face the GlobalPort Batang Pier on Saturday, August 27 at Legazpi City, went down with a 3-3 slate.

Moreover, the win of Ginebra brings them momentum heading into Manila Clasico on Sunday, August 28 at 6:45pm.