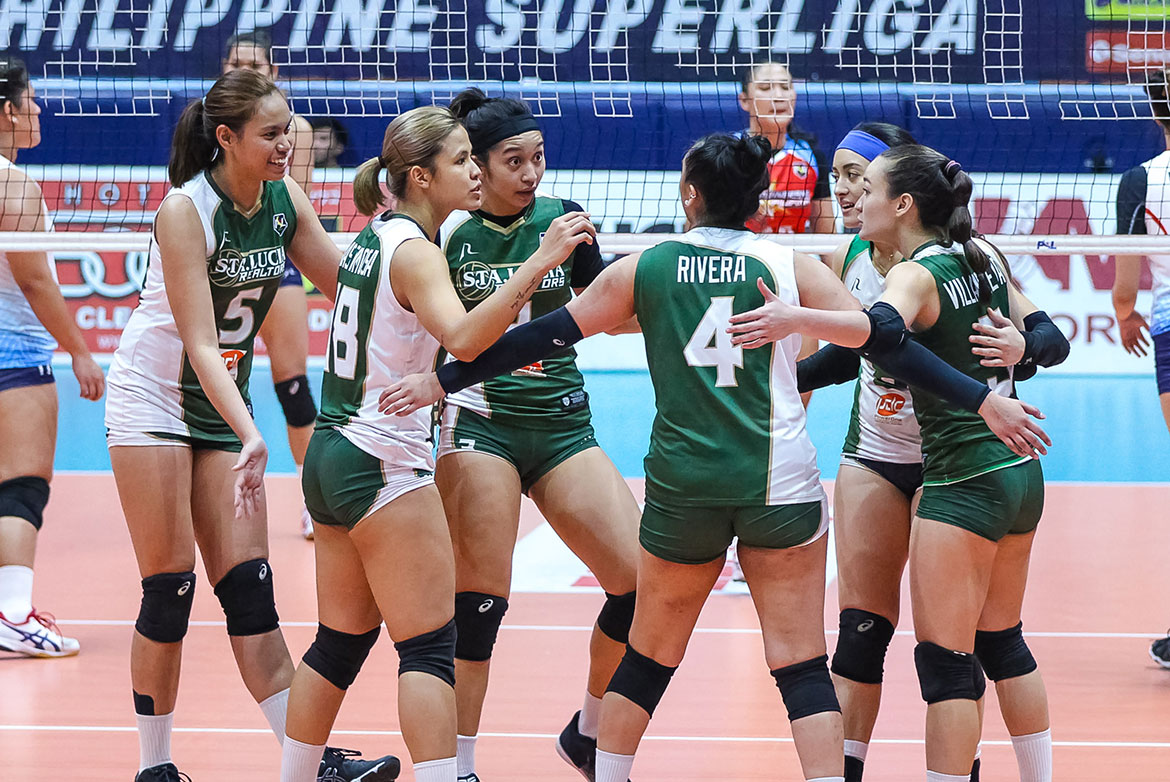 After a long run of losses, the Sta. Lucia Lady Realtors have finally put an end to their 10-game drought in the 2019 PSL All-Filipino Conference on Thursday afternoon.

The Lady Realtors vented their frustrations on the winless Marinerang Pilipina Lady Skippers, 25-17, 25-19, 31-29, at the FilOil Flying V Centre.

The victory arrested a 10-game losing skid for the Lady Realtors, who have breathed life to their win-loss record that now stands at 2-10.

“They went through a lot of losses before this. Yung ibang team will just collapse and give in, ito hindi, we wanted to solve it nagisip kami ng mga paraan para mastop namin yung losing streak in fact ang target namin is to win in straight sets,” he added.

Breaking the lopsided theme of the first two chapters, Marinerang Pilipina played with urgency, jumping to the second technical timeout with a two-point cushion. But the troika of Glaudine Troncoso, Andrea Marzan, and Rachel Austero turned the tides to Sta. Lucia’s favor, putting their team at match point, 24-22.

However, Judith Abil and Chiara Permentilla linked up to forge a deuce. From there, both teams traded crucial plays as the match swung to a string of deadlocks. Troncoso, though, shattered the 29-all lock before Abil’s equalizer sailed wide.

Amanda Villanueva, who commandeered Sta. Lucia’s drubbing of the Lady Skippers in the first two sets, finished with 13 points built on nine attacks and four blocks to go along with 21 excellent digs and 12 excellent receptions.

Pam Lastimosa supplied 11 markers, all of which coming from attacks, and 10 excellent digs while Troncoso, Marzan and, Austero chipped eight points each. Rebecca Rivera generated her team’s offense with 22 excellent sets.

The Lady Skippers, on the other hand, have fallen to a 0-9 card as they continue their search for a breakthrough win in the tourney.

Abil topped Marinerang Pilipina with 13 points off 12 attacks and a block laced with 13 excellent digs and seven excellent receptions. Permentilla contributed 10 points in the loss.

Sta. Lucia will try to sustain momentum and fulfill a tall order when it faces Petron on Tuesday at the Ynares Sports Center in Antipolo. Meanwhile, Marinerang Pilipina looks to barge into the win column as it squares off against Cignal on Saturday at the FilOil Arena.