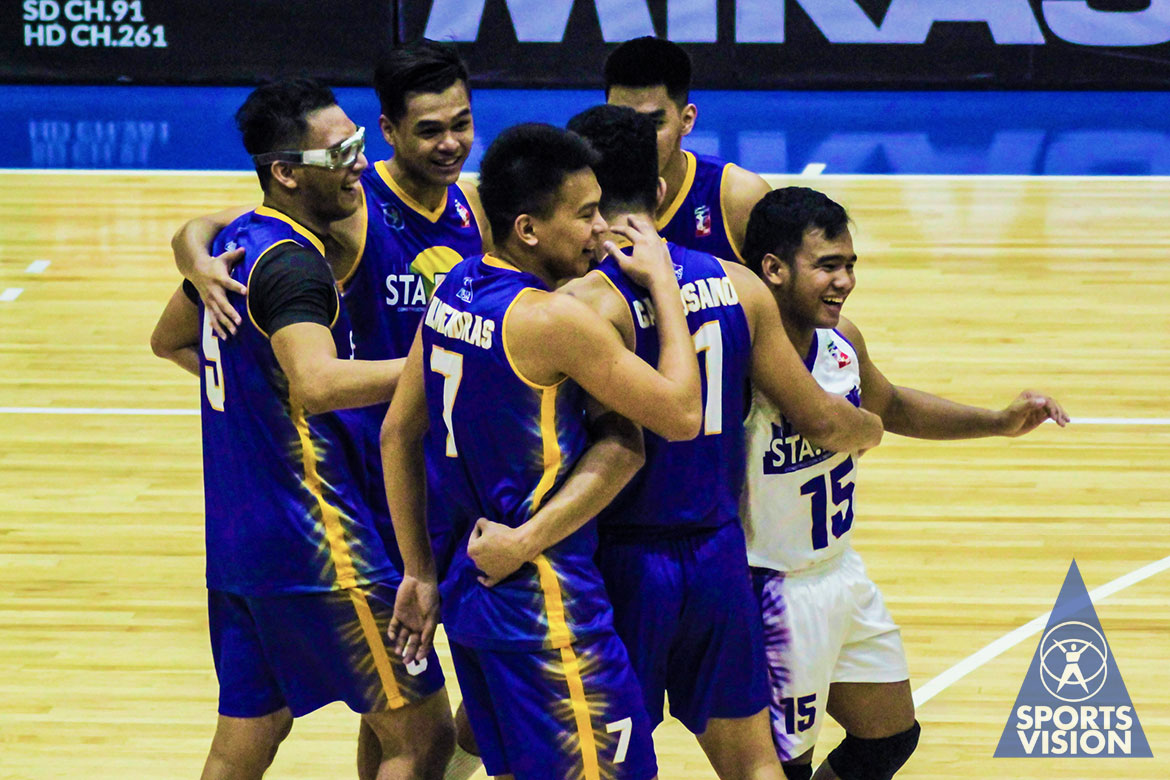 Sta. Elena scored an upset victory to keep its playoff hopes alive while Go For Gold-Air Force forged a tie with Cignal at the top slot in the 2019 Spikers’ Turf Reinforced Conference.

NU’s dynamic duo Nico Almendras and Edward Camposano spearheaded Sta. Elena’s attack with the former dropping 20 points all coming from attacks while the latter added 16 for the Ball Hammers, who currently rests at the fourth spot with a 6-4 record.

After taking the first set, Sta. Elena sustained its hot-start and racked up the second frame with Almendras breaking the 22-all deadlock with a cross-court hit, 23-22, which was then succeeded by a net touch on Cignal and a James Natividad kill which placed them at a 2-0 lead.

With their backs against the wall, Jude Garcia stepped up for the struggling Cignal and scored two points on the HD Spikers’ 4-2 run to extend the game to a fourth set.

With Cignal trying to spark a comeback, Almendras again came up to Sta. Elena’s defense, converting an attack through the block which gave his side a comfortable five-point cushion, 23-18.

Peter Torres and Jude Garcia tried to salvage the game for Cignal scoring on two consecutive points to cut the lead to three, 23-20. Berhashidin Daymil and Almendras sealed the upset victory for Sta. Elena.

Marck Espejo 17 markers while Jude Garcia contributed 15 points on Cignal’s first loss of the conference. The HD Spikers are tied with Air Force at the top spot with a 9-1 record.

Abdilla paced Air Force with 25 points on 19 attacks, four aces, and two blocks while Bryan Bagunas and JR Labrador chipped in 14 and 10 points, respectively for the Jet Spikers.

After a rousing start, the Jet Spikers found themselves at the edge of their seats, dropping the third and fourth frames which forced a deciding fifth set.

With Air Force down by three in the final stanza, 7-10, Abdilla wasted no time and fired four points in the Jet Spikers’ 5-1 run to take the lead from Animo, 12-11. From there, Bryan Bagunas took over and delivered the fatal blows for Air Force.

On the other hand, Roniey Adviento finished with 14 points while Kieffer Reyes added nine for Animo, who dropped to the sixth spot with an even 5-5 card.

“With the impending departure of nung dalawang National Team player, si John Vic at si Mark [Alfafara], magkakaroon kami ng mas cohesive na unit na hindi magre-rely doon sa dalawa,” Mamon added, as the duo will not be able to train with the team for the playoffs due to the 2019 Thailand Open.

On the other hand, Army, who dropped to fifth place with a 5-4 record, was led by team captain PJ Rojas with 16 markers.