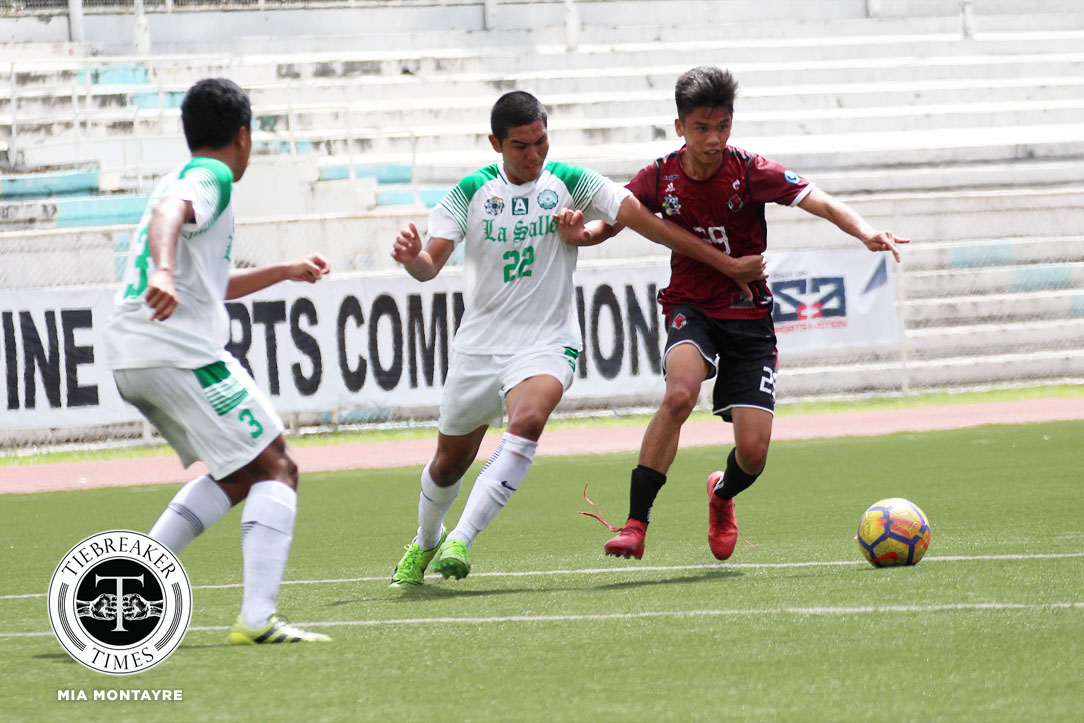 After clinching the first berth in the UAAP men’s football semifinals, it is imperative for the University of the Philippines to stay consistent.

Despite some struggles, the Fighting Maroons pulled another one against tournament hosts De La Salle University Green Booters after goals from both halves sealed their ninth win of the season, 2-0, Thursday evening at the FEU-Diliman Field.

Contrary to their lax start last Sunday against the National University Bulldogs, the league-leaders were dominant right out of the gates. Shot after shot from the Maroons forwards — led by their leading scorer JB Borlongan 00 went the way of Green Booters’ keeper Paeng De Guzman, that the latter gratefully collected. Some of the shots went wide for the Diliman-based side, but that should have served as a warning for their opponents.

With the relentless pressure on the La Salle goal, the Green and White were called for a handball infraction in the 27th minute, misjudging Fidel Tacardon’s shot. Third-year midfielder Daniel Saavedra could not be denied from the spot, firing a well-taken kick into the heart of the goal and past De Guzman.

The solitary goal stood at the half, but not without the Green Booters toughening up on offense. Fortunately, the reactive defense of the Fighting Maroons did well enough to keep the lead unperturbed.

Nonetheless, it was a matter of time when the Taft-based side mounted their own onslaught. The green-shirts continually pressed the UP defense, forcing Ian Clariño and his line to several clearances. First-time goalkeeper Harel Dayan also had to pull off some great saves, the strongest of which came off a Christian Zubiri shot around the 50th minute.

That seemed to awaken the Fighting Maroons, as Borlongan — with the help of Tacardon and Kintaro Miyagi, — finally broke through La Salle’s half with just a few minutes left in the match. After a good build up, rookie Tacardon cut to his left and inched closer the goal.

The newbie then took a shot which almost went to the side netting, but was deflected into the goal off a La Salle defender’s foot and into the onion bag for the second goal of the match in the 86th minute, which stayed until the final whistle sounded.

For head coach Anto Gonzales, the Maroons still need to keep up and stay sharp in the next few games. He said, “I think we started well, but towards the end of the first half, the tempo went down. In the second half, in the first 15 or 20 minutes, we were out-worked by La Salle. We were second to the ball. We really need to be consistent.”

The champion mentor hopes that the top-seed team will prepare better mentally for the coming games after the break. “I think it is the mindset really. I think if they use their head, stayed sharp, they are so beautiful to watch. So going into the next game, it will be a lot of mental preparation.”

UP (29 points) will next face the Adamson University Soaring Falcons on April 5 at 4:00pm at the Rizal Memorial Stadium. On the other hand, La Salle (16 points) will take on the University of Santo Tomas Golden Booters (18 points) on April 8 at 3:30 p.m at the Diliman pitch.