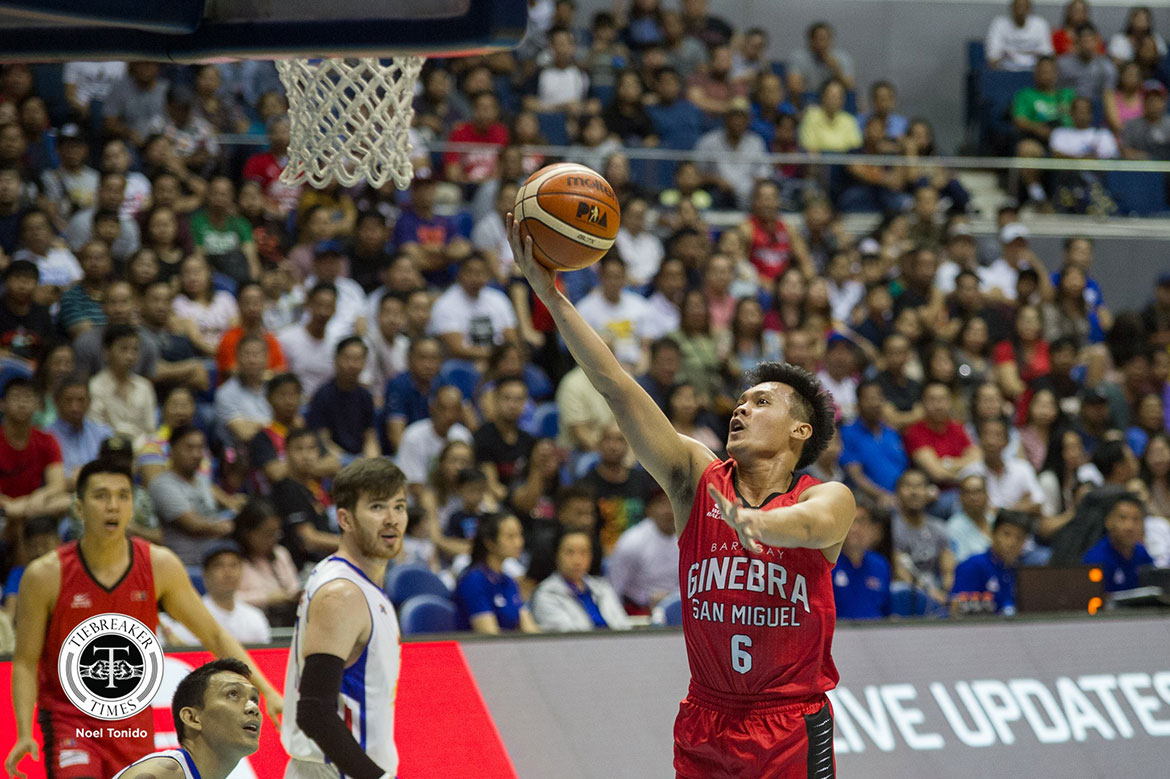 The Barangay Ginebra San Miguel have moved closer to the 2019 PBA Philippine Cup quarterfinals after defeating rivals Magnolia Hotshots in overtime, 97-93, in another Manila Clasico tiff, Sunday night at the SMART Araneta Coliseum.

The Barangay lost hold of a 15-point lead, as the Hotshots fought back gallantly and forced an extra five minutes behind Jio Jalalon’s heroics. Scottie Thompson and Japeth Aguilar then conspired in overtime to save the Gin Kings.

It certainly lived up to the hype today,” said Ginebra head coach Tim Cone. “I gotta give a lot of credit to the players for getting their minds back to the game. Japeth had defensive plays. Scottie was spectacular all game long.”

Ginebra had a double celebration, as Sunday marked the coronation of LA Tenorio as the league’s new Ironman, surpassing legend and Hotshots manager Alvin Patrimonio’s record of 596 straight games played.

“This is gonna be LA’s big night. We wanted to make it memorable for him. It was nice,” Cone said of Tenorio, who finished with 10 points, eight assists, and five rebounds in the 40 minutes and 19 seconds he saw action.

Thompson captained the Barangay with a career-high 27 points on 57.1 percent shooting from the field along with 11 rebounds, five assists, a steal, and a block in nearly 42 minutes. Aguilar supplied 16 markers and 12 boards.

Ginebra had already taken control of the match early in the second quarter, when the trio of Kevin Ferrer, Art Dela Cruz, and Sol Mercado joined hands to steer their side to a huge 33-18 lead with less than eight minutes remaining.

But the Gin Kings would soon lose hold of that lead. With Magnolia down six with 49.5 seconds remaining in regulation, Jalalon nailed back-to-back threes to send the game into a deadlock at 85 with just 4.2 seconds on the clock.

Tenorio then tried to win it for the Gin Kings, but Mark Barroca defended him well and forced him to miss.

Ginebra have improved their record to 5-3. They have a chance to secure their spot in the next round with a win over the NLEX Road Warriors on Saturday, March 23, at the Angeles University Foundation Sports Arena in Pampanga.

“Another week before we play NLEX. It’s another hot team. It’s tough to play teams with great momentum,” said Cone, as the Road Warriors are coming off a huge 122-101 victory over the Blackwater Elite also on Sunday evening.

Barroca had 23 points and seven assists to lead the Hotshots, whose mini two-game winning streak got snapped. Jalalon supplied 22 points – all in the second half – along with six rebounds and three steals.

The Hotshots have fallen to 3-5, and will now need to sweep their last three games to secure a spot in the quarterfinals. That journey will start on Wednesday, March 20, when they take on the NorthPort Batang Pier.