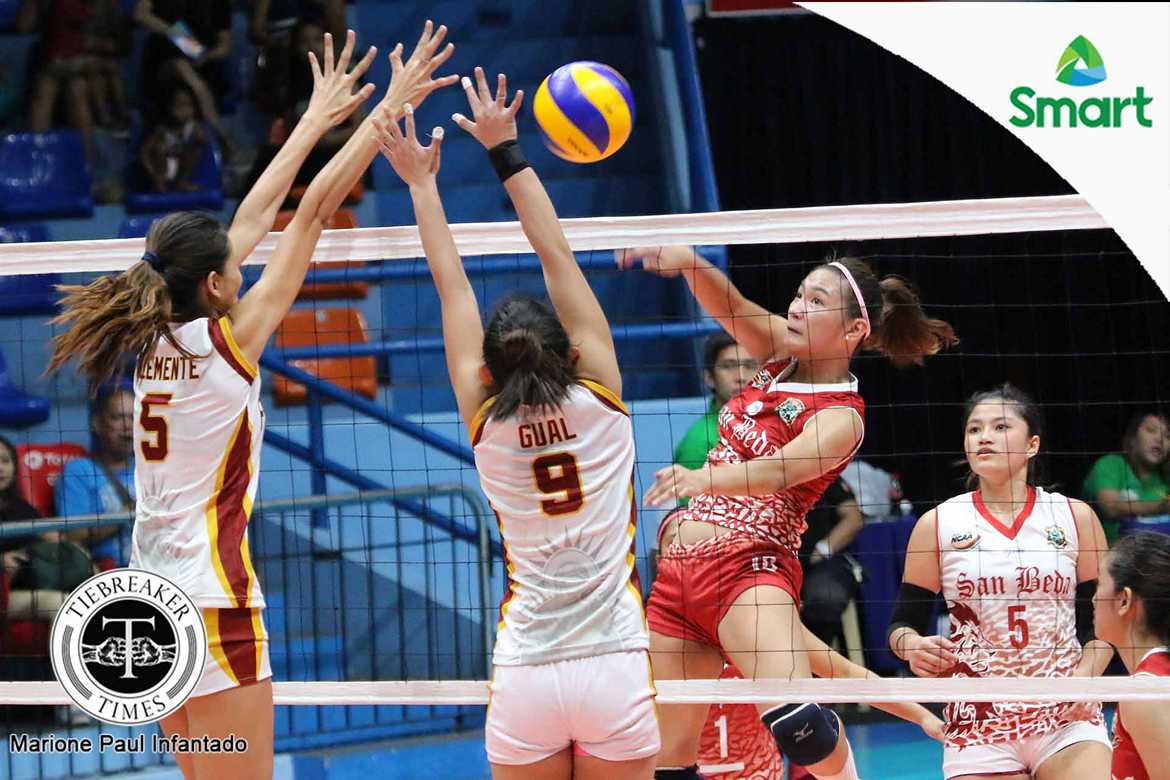 Francesca Racraquin topscored for the Bedans and all players with 14 points off 12 attacks, while Nieza Viray added 11. Rebecca Cuevas produced 28 excellent tosses in today’s victory, which improves their record to 2-0.

The Lady Altas’ pace went slow in the match’s opening set, committing unforced errors simultaneously that helped the Bedans post a 17-13 lead midway. Perpetual  scored off tips and blocks, but could not get their act together as SBC nailed down-the-line and through-the-block hits behind Racraquin and Viray to outscore their counterparts 8-6 on their way to a 1-0 set lead, 25-19.

The second set saw the Lady Altas make up for their Set 1 loss, playing a more balanced attack on offense that made them post a wide 17-10 lead. Errors were once again an issue on their side, allowing San Beda to chip in points and inch closer, 22-18. However, Perpetual weathered such, and with Cindy Imbo nailing through-the-block hits, the Lady Altas went even at 1-1, 25-20.

Now back at square one, the Lady Red Spikers took full advantage of the third period early, even posting a wide 19-11 lead to keep Lady Altas at bay. They even went closer to set point, 23-16, but the Lady Altas came back through kills and an ace to inch within three, 23-20. However, a service error from Imbo ended Perpetual’s comeback hopes, 25-21, and helped SBC go up 2-1.

Both squads played tight in the fourth and final set, not allowing each other to pull away wide. The Perps took a two-point lead late in the frame, 19-17, but squandered their slim lead as the Lady Red Spikers pulled a dominant 8-2 scoring spree capped by a Racraquin down-the-line attack to emerge victorious in four sets, 25-20.

San Beda head coach Nemesio Gavino spoke about the team’s lackluster showing in the second set in which they dropped, saying that his players played lax and prevented them from winning via sweep.

Coleen Bravo was the lone Lady Altas that scored in double figures, leading the Perps with 10 markers off 7 kills.

San Beda (2-0) will look to go up 3-0 as they face Lyceum Lady Pirates on Monday, November 28. On the other hand, the Perps (0-2) will look to post their first win of the season opposite Emilio Aguinaldo College next Tuesday, November 29. Both matches are set at 11:30 AM.