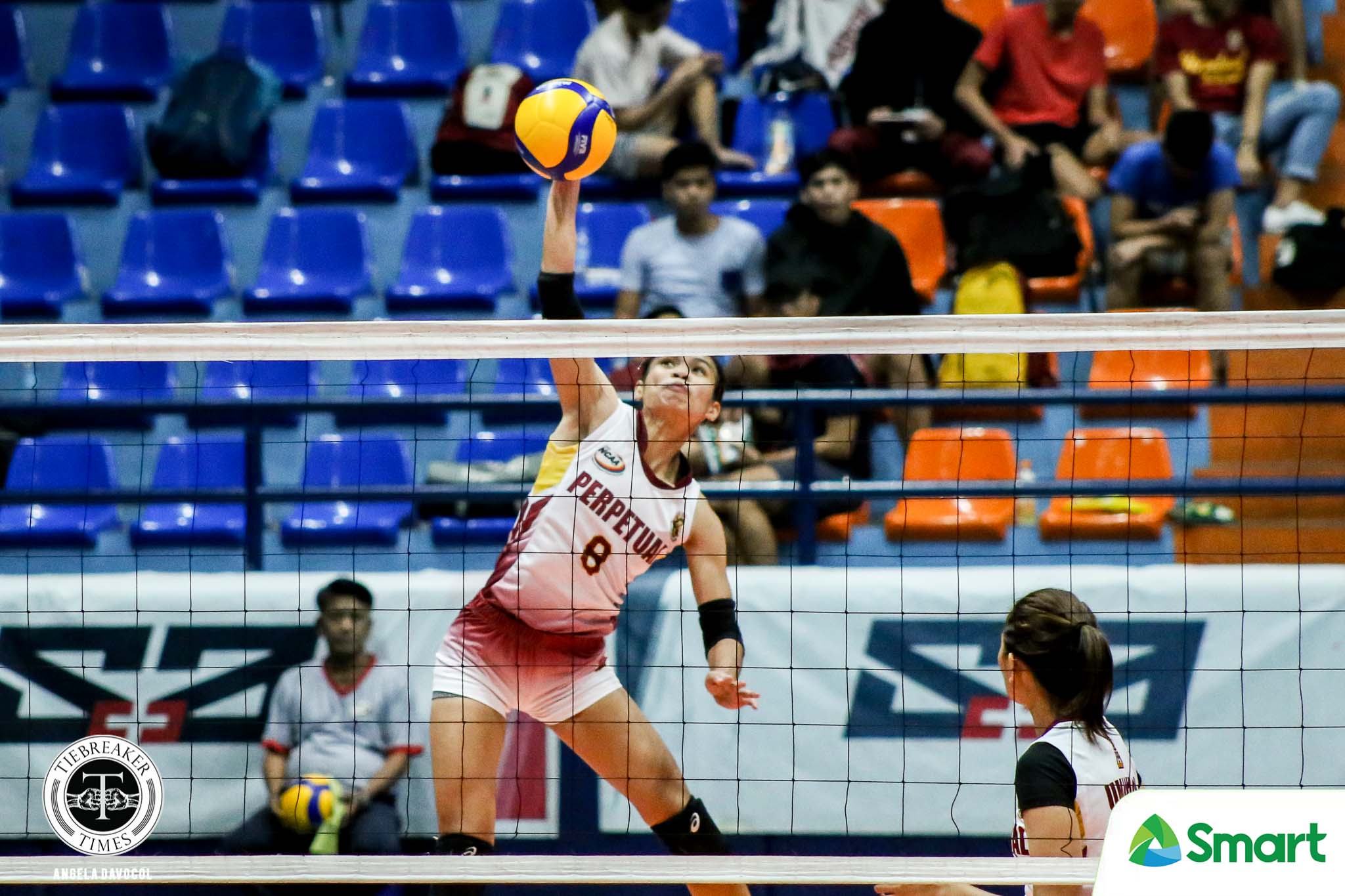 University of Perpetual Help System DALTA endured a torrid surge from Lyceum of the Philippines University, pulling off a cardiac escape act, 25-27, 25-23, 26-24, 14-25, 17-15, in the NCAA Season 95 Women’s Volleyball Tournament, Tuesday at the FilOil Flying V Centre.

Battle-tested hitters Jhona Rosal and Bianca Tripoli took charge down the stretch, as the Lady Altas escaped the jaws of defeat and rose to third place with a 2-1 win-loss card.

Rosal spearheaded Perpetual’s offensive charge, unleashing a game-high 20 points built on 17 attacks and three blocks. She also had 16 receptions and 10 digs for a masterful triple-double outing. Tripoli had a scintillating performance as well with 19 markers, all but three of which coming from spikes.

The hard-hitting duo put their scoring exploits into good use when Perpetual seemed headed for a downward spiral.

Surrendering the fourth set to the Lady Pirates in deflating manner, the Lady Altas regained footing after finding the spark in Rosal and Tripoli. Hannah Suico, who rode the bench for the majority of the match, then made her presence felt late; she nailed the hits that also pumped Perpetual’s cushion to 11-9.

But Lyceum was quick to cut the slim deficit and tie a 13-all knot. Shyra Umandal then botched a service attempt that put the Lady Pirates at match point. Tripoli refused to go down just yet, though, hitting a sharp cross-court hammer to set up a deuce.

Suico was the first to strike in the two-to-win situation, giving Perpetual the slim edge. But Tripoli coughed up  a mishit from the service line in the ensuing play, bringing things back to square one.

In deep waters, the Lady Pirates succumbed to the pressure. Jacqueline Acuña failed to capitalize on a freebie, sending her eventual go-ahead dump at the net. Rosal then pummeled a blistering kill that went down the line to seal the deal.

Jenny Gaviola, who was recently converted from middle blocker to setter, also displayed her wares for the Lady Altas. She tossed out 13 excellent sets, while hammering down seven of her team’s 14 blocks — much to the delight of Cariño.

On the other hand, Lyceum slid to the bottom of the standings with a 0-3 card.

Rafael, Ciarnelle Wanta, and Mary Joy Onofre topped the Lady Pirates with 15 markers apiece. Rafael and Wanta had all but one of their respective outputs coming from attacks, while Onofre anchored above the net with six blocks in a losing cause.

Perpetual seeks to sustain its momentum going when it collides with Mapua on Friday, January 24. Meanwhile, Lyceum tries to snap out of its funk when it faces against JRU on Saturday, January 25. Both matches will be held at the same venue.