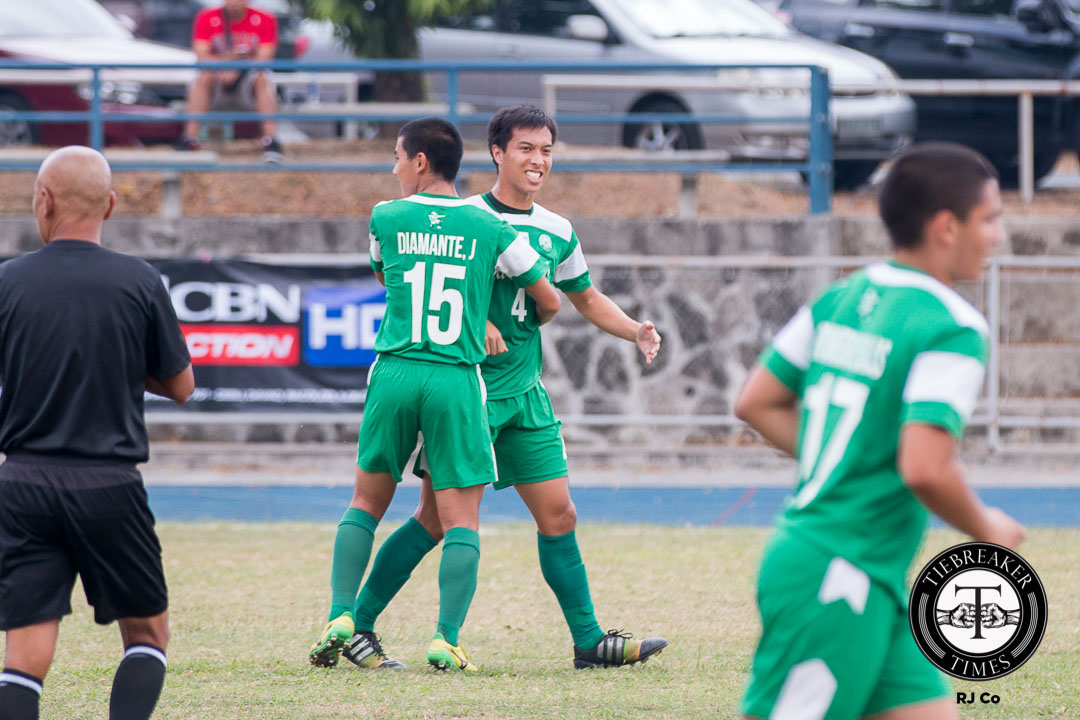 Driven to go all the way, the De La Salle Green Archers are enjoying a healthy start to Season 78. They have an enviable record of five wins and a draw nearing the end of the first round. One of the driving forces in La Salle’s strong showing this season has been Greggy Yang.

Having scored the first goal of the season, the fifth year player now leads the scoring among all Lasallians with a neat five-goal tally to his name. Unlike in previous seasons, Yang is now deployed as a holding midfielder and is one of DLSU Coach Hans Smit’s designated set-piece takers. He revealed that he has taken the challenge of advancing further up the field with excitement. “Going to training, [I’m] very excited to keep learning. I’m new to the position so I have to learn everyday. I have so much ‘gana’ to put in the work these days,”  he elaborated.

Yang’s enthusiasm for playing midfield definitely shows, as he bagged a hat trick in their emphatic 6-0 triumph over Adamson last Thursday. Yet for Yang, goalscoring is not his main objective.  “Every game with my new position I tell myself two things: contribute on offense [and] contribute on defense. If I do it, it works out for the team. It [just] so happens that the goals are coming on my end also,” he discussed. The PAREF-Southridge alum’s other goals have proven to be important ones as well, as he opened the scoring in crucial wins against the Ateneo de Manila University and Far Eastern University.

Regarding their overall performance, Yang reckons that the win against the Soaring Falcons was a proper response after having been called out by Smit the weekend before. “It’s definitely a statement to coach Hans because he really admonished us to do better than in our last game (1-0 vs UE) he said. Still undefeated this season, the Green Archers look poised to mount a deep run, a season after coming so close to winning it all, just as they had done a year before.

However, unlike in Season 77, La Salle have been playing better. Statistics suggest they are getting more points and scoring more goals while also limiting their opponents. Asked about the main difference between the two most recent seasons, Yang pinpointed the team’s better finishing. “Last year we had an even more senior team. We had just as much talent but this year I think we’re really putting the ball in the net,” he expounded.

Indeed, the Green Archers have now scored a goal more than they did at this stage last season. In the same light, they have now pocketed four more points than they had six games into last season. On the other side of the field, La Salle have also halved the number of goals they had conceded in the same period. After the first six games of Season 77, DLSU had given away six goals. Now, they have only allowed three. With Yang now often situated in front of the back four, the increased difficulty of penetrating the La Salle defense does not come as a surprise.

La Salle made it all the way, without experiencing defeat, to the finals last season. There, they narrowly lost in a heartbreaking game against FEU, 3-2, after extra time. Taking that into account, Yang insists there is still a long way to go and a lot of things can happen. What matters is for them to meet their goals along the way. “We did well this game but we can’t stop here. We have a big game next. NU’s a tough team and we just have to keep working hard and hopefully the results will continue,” Yang, who also plays for UFL club Green Archers United, declared.

As Yang had said, the Green Archers will face the National University Bulldogs on Thursday afternoon. Many people watching may choose to keep a close eye on Yang this time around. For him, however, it doesn’t matter if he scores or not as long as they end the game with another win.