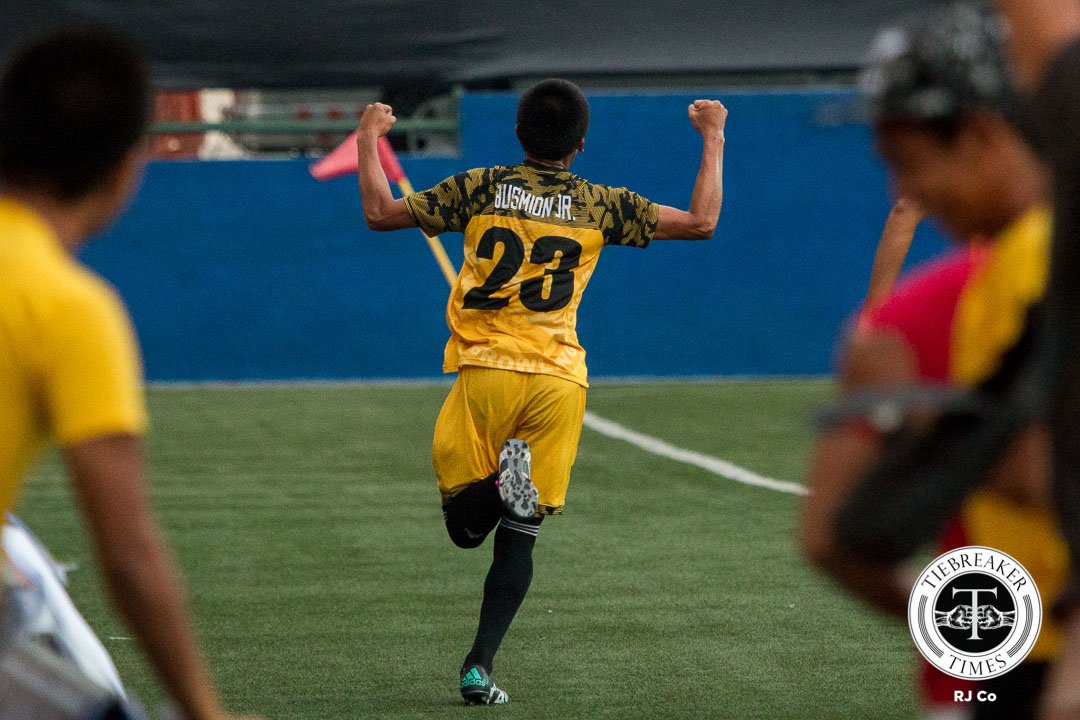 Another win and another reason why the University of Santo Tomas Growling Tigers should be taken seriously in this UAAP Season 78 Men’s Football Tournament.

The Growling Tigers added another huge win to their column this season when they survived the Far Eastern University Tamaraws 1-0 courtesy of a 73rd minute wonder-goal from Dionisio Busmion Jr. The  result has given them eleven points, enough to top the standings by this stage and stand one point above the De La Salle Green Archers.

The match was another rope-a-dope encounter for the Growling Tigers, and a mixture of luck and resilience secured them three valuable points.

Ronald Batisla-Ong had a half chance in an early in the game from a UST set-piece but he headed the ball out. That was virtually the Growling Tigers’ only chance on goal, as the Tamaraws dominated the proceedings in the first half. The Tamaraws’ goalkeeper Ray Joyel wasn’t really threatened in the first forty-five minutes

The Tamaraws dictated the tempo and created chances for themselves; however, tentativeness was their main problem in attack. Midfielder Paolo Bugas was their main outlet in attack as he not only created chances for himself, but also openings for this teammates. Bugas had a shot towards the UST goal but it went wide and was eventually cleared by the Growling Tigers’ defense.

Bugas, the creator, was on show when he made an opportunity for rookie Rico Andes, but the latter scuffed his shot and saw it easily saved by UST goalkeeper Jose Abraham. Possibly frustrated at the Tamaraws’ lack of a final ball, Audie Menzi had an attempt on goal outside the UST box but it went well over.

Eric Giganto could have given the Tamaraws the lead but Abraham was on hand to stop him. Abraham parried Giganto’s shot away from goal, and the Growling Tigers successfully scrambled to clear the danger. It finished goalless at the half with both teams left exasperated for different reasons.

Just minutes into the second half, Giganto should have given FEU that important first goal after some clever play from him and his teammates, but he squandered his shot with minimal pressure. Once again it was Bugas who was the chief instigator for the Tamaraws. His passes should have been rewarded with goals if it weren’t for the stingy UST defense.

On the other hand, UST were a much better side in the second half. Similar to their win against NU, the Growling Tigers became more aggressive and crisper in their passing. Needless to say, Joyel had a busier time in said period.

And then the surprise happened ala the Growling Tigers’ win over the Bulldogs. The goal-out-of-nowhere has been a specialty for UST in this early part of the season. A set-piece play wasn’t dealt with well by the FEU defense and it led to Joyel mishandling the ball. UST regained possession at a very dangerous position and it was passed back to Dionisio Busmion Jr., whose shot from outside the box landed perfectly in the FEU goal at the 73rd minute.

The Growling Tigers ran wild in their celebration, perhaps stunned that their good fortune was extended in this match.

As for the Tamaraws, well, they were livid. Already angry at themselves that their possession hadn’t amounted to goals, the Tamaraws urgently pushed for an equalizer. They won a free kick at the edge of the UST box, but Bugas’ attempt was obstructed by the Growling Tigers’ wall. Joshua Mulero added to FEU’s irritation when his shot far outside the UST box went sky high.

UST defended for their lives in the last ten minutes of the match. Every FEU attack was repelled by the Growling Tigers’ defense and if they were eluded Abraham was alert to thwart any threat. The Growling Tigers sent the ball long for the Tamaraws to regain possession, with the former relying on rookie AJ Pasion to harass the latter’s back four.

In the end, the Growling Tigers held on for another huge win. For the Tamaraws, though, their season hit another huge road block and it’s back to the drawing board once again.

UST coach Marjo Allado was visibly proud of his team at the end of the match. Allado said, “We’re very happy, coaches and players, because we’re number one right now. We overlap La Salle by one point lang ata. Overall yung mga players na nag excel dito are the back four and the goalkeeper, especially Ronald Batisla-Ong since he held the midfield. FEU dominates the whole game eh but at the end, last twenty minutes, now we tried to find a way and nakascore kami sa kanila. Pero kung titignan mo sa FEU, almost half court kami eh. We denied all their attempts because of Abraham. Until now Abraham is still consistent and the back four so I’m very satisfied with the game today.”

Allado added that the results against the De La Salle University, Far Eastern University, and National University are an advantage because they came from the first round. “Kasi sa second round medyo may advantage ka na eh so hopefully next game against Ateneo, tuloy-tuloy kami. One at a time.” He then praised his team’s new response to their opposition. “Yung maganda sa team is that they never give up for ninety minutes. Depense lang ng depensa especially pag nakascore kami. Yung team na ito naglalaro sila as a team talaga and sana tuloy-tuloy.”

The Ateneo De Manila University Blue Eagles are next for the resurgent UST on March 5, 2016 (Saturday 7:00PM) at the McKinley Stadium in Taguig, while FEU will face the University of the East two days earlier at the Moro Lorenzo Field in Ateneo.