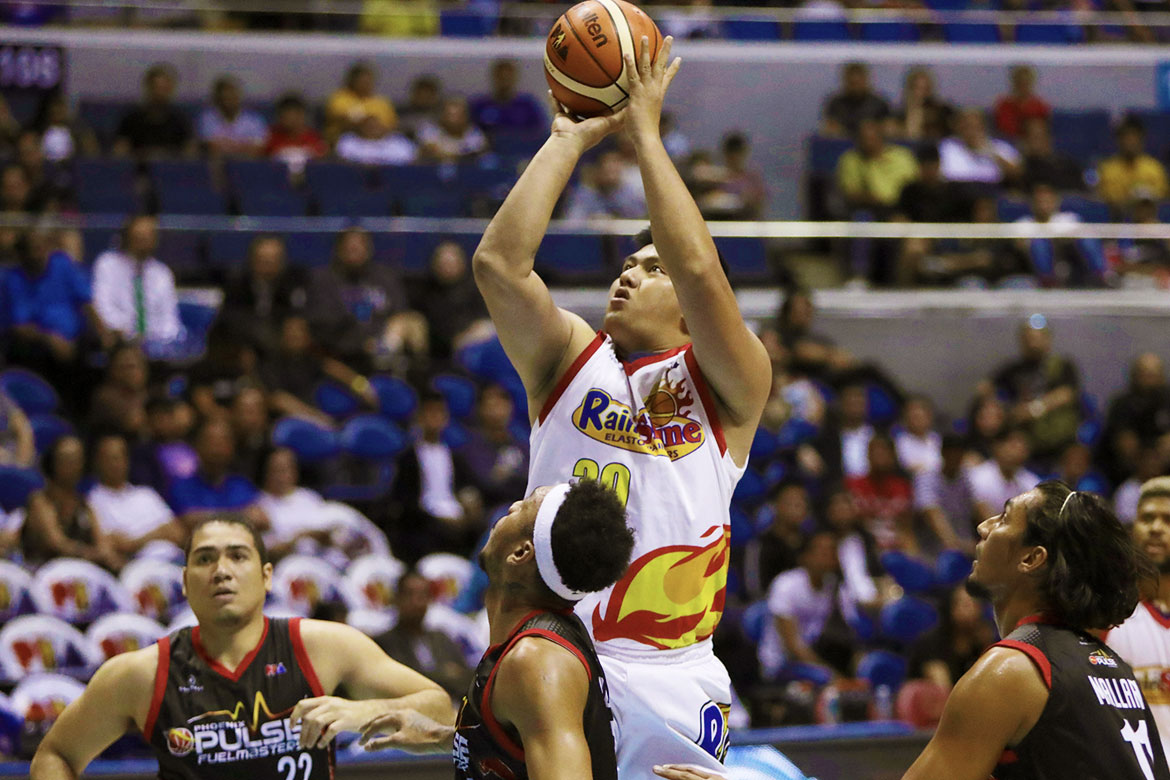 In a battle between two heavyweights, the Rain or Shine Elasto Painters showed that they are one of the top dogs, dealing the Phoenix Fuel Masters their first loss in the 2019 PBA Philippine Cup following a 98-94 overtime win, Sunday at SMART Araneta Coliseum.

Baskets by Rey Nambatac, Beau Belga, and Mark Borboran inside the final 1:33 fended off the Fuel Masters — who battled back from as deep as 14 down in the third canto — and ended the latter’s franchise-best winning streak.

Rain or Shine has won its fourth straight and improved to 6-1 to take the top spot from Phoenix, who’s now at 5-1. By reaching six wins, the Elasto Painters have become the first team in the tilt to reach the quarterfinals.

“Well, another good win for us. Phoenix came back, we had a good lead and they didn’t stop. They never gave up, they fought their hearts out. We just hit the big shots in the end,” said Rain or Shine head coach Caloy Garcia.

Beau Belga flirted with a triple-double with 16 points, nine rebounds, and seven assists to lead the Elasto Painters. Kris Rosales finished with a career-high-tying 16 points as well, while Maverick Ahanmisi 13 markers and five boards.

Rain or Shine had already been in command when they made 14 unanswered points — capped by Jewel Ponferrada’s split from the line — en route to a wide 70-56 advantage with less than a minute to go in the third chapter.

Phoenix though fought back afterward. Down five with 56.4 seconds remaining, they pulled off a 7-2 run — punctuated by Jason Perkins’ lay-up — to tie the game up at 87-all with 13.1 seconds on the clock.

The Elasto Painters looked to end the match by giving the last possession to James Yap, but the two-time league MVP’s deep three-pointer from the top did not hit its target, thus sending the match into an extra period.

Phoenix still didn’t give up in OT as they were able to tie it up at 92-all with 2:41 to go, but Nambatac’s lay-up off am aggressive drive followed by Almazan’s perfect trip to the line gave Rain or Shine a 96-92 lead with 53.9 left.

Alex Mallari tried to will his team back as his own lay-up inched Phoenix closer, but Borboran’s one-handed shot with 12.1 seconds left to play proved to be the blow that knocked the Fuel Masters out and down cold.

Almazan and Nambatac chimed in 12 and 10 markers, respectively.

The loss wasted Perkins’ career-high 27 points along with nine rebounds. Calvin Abueva produced 16 points and 12 rebounds, while Matthew Wright made 16 markers as well along with seven assists and five rebounds.

Rain or Shine will look to keep going versus the Magnolia Hotshots this Wednesday, February 13, while Phoenix will aim to get back on track when they face NorthPort Batang Pier on February 27. Both games are still at the Big Dome.

READ  Is there a rivalry between Meralco and Ginebra? Norman Black doesn't think so