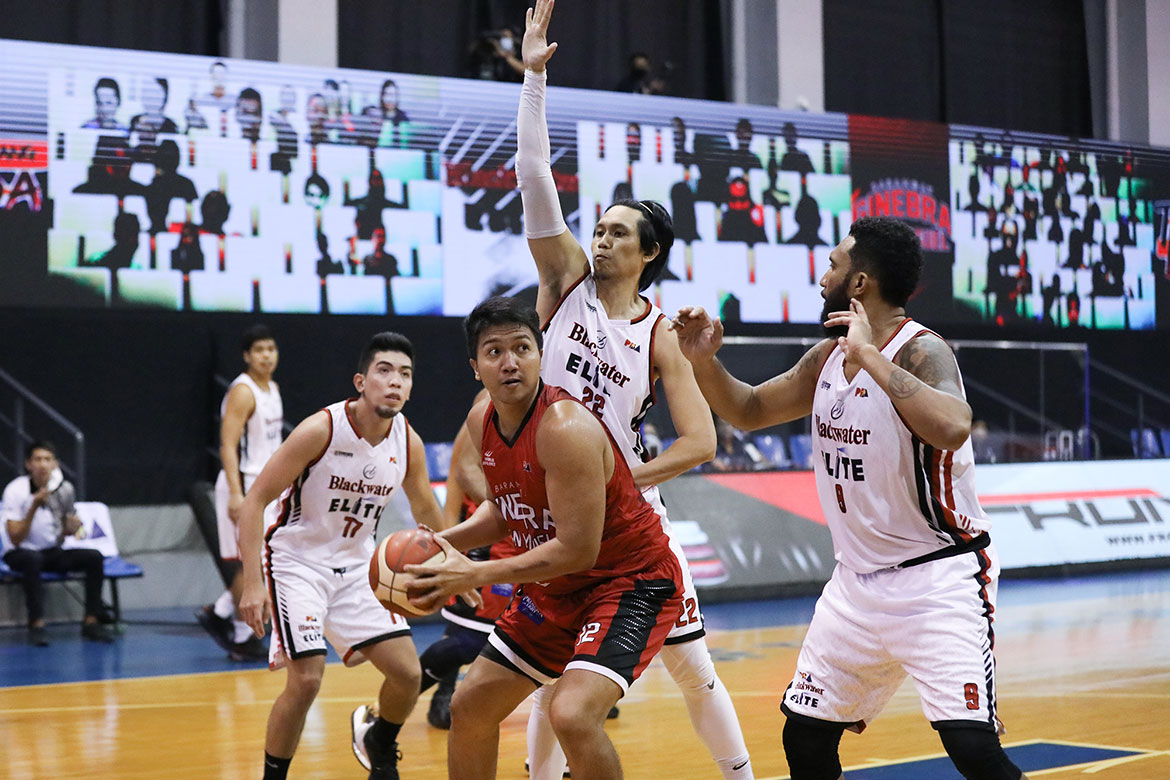 Prince Caperal shot his way to a career outing as Ginebra downed Blackwater, 103-99, for its second win in the 2020 PBA Philippine Cup Thursday night at Angeles University Foundation Sports and Cultural Center powered by SMART 5G in Pampanga.

The 6-foot-7 slotman poured 24 points on 9-of-14 shooting to lead the Gin Kings, who nearly coughed a 10-point lead before Scottie Thompson, Stanley Pringle, and Jared Dillinger provided the timely shots to ensure the victory.

“We had guys who stepped up. Prince played well. We knew from day one when we got Prince that he could shoot the ball. That’s never been his problem. He could always, always shoot the ball,” Coach Tim Cone said.

Caperal, who had 11 points in their opening day conquest of NLEX last Sunday, scored nine of his points in the second quarter, including five in a 7-0 spurt that gave the Barangay a 49-37 lead at the half.

That lead, however, was chopped down in the third chapter, and a Don Trollano triple put the Elite ahead, 63-62, with 5:08 to go. Blackwater headed into the final period up 76-75 thanks to a 39-point explosion in the frame alone.

Caperal, though, would swish in his fifth triple of the night at the 6:50-mark of the fourth to ignite a 10-3 run, which propelled Ginebra to a 96-86 lead with 3:10 remaining in the game.

Quick was Blackwater to respond as Mac Belo and KG Canaleta buried back-to-back treys to cut it to four. The former tried to cut the deficit further with 1:18 left through a drive to the hoop but was challenged.

Thompson then came up with a timely bucket for the Gin Kings afterward, sinking a tough jumper off the glass to give his side more breathing space, 98-92, with 53.4 seconds to go.

Pringle sank his free throws exactly 30 seconds later to re-establish the six-point lead as a response to Trollano’s split, 100-94, but Roi Sumang sank a stpeback trey to cut the deficit to just three with 9.6 ticks left.

The Elite then played the fouling game to freeze the clock and hope for misses, but Dillinger made one of his shots from the line with 8.1 seconds left to play to settle the final count.

“We didn’t play a clean game today at all, but again, I just thought we battled. And we showed character. And that’s what we want to represent us. I’d like to think that we’re not there to play pretty and make great plays, we’re there to win basketball games and I like the fact that our players are taking hold of that, and we can play a game that’s not pretty, and still win it,” said Cone.

“And usually teams that can do that have a chance to win championships, and that’s what we’re shooting for,” he added as Ginebra created a three-way logjam with TNT and Phoenix on top of the standings as they all carry 2-0 cards.

#ReadMore  Recovering Mac Belo glad to be back in Gilas fold

Trollano led Blackwater with 23 points and 10 rebounds in the defeat that sent the Elite to 1-1. Belo provided 16 points and seven caroms, Sumang had 14 points, while Ed Daquioag added 11 points.