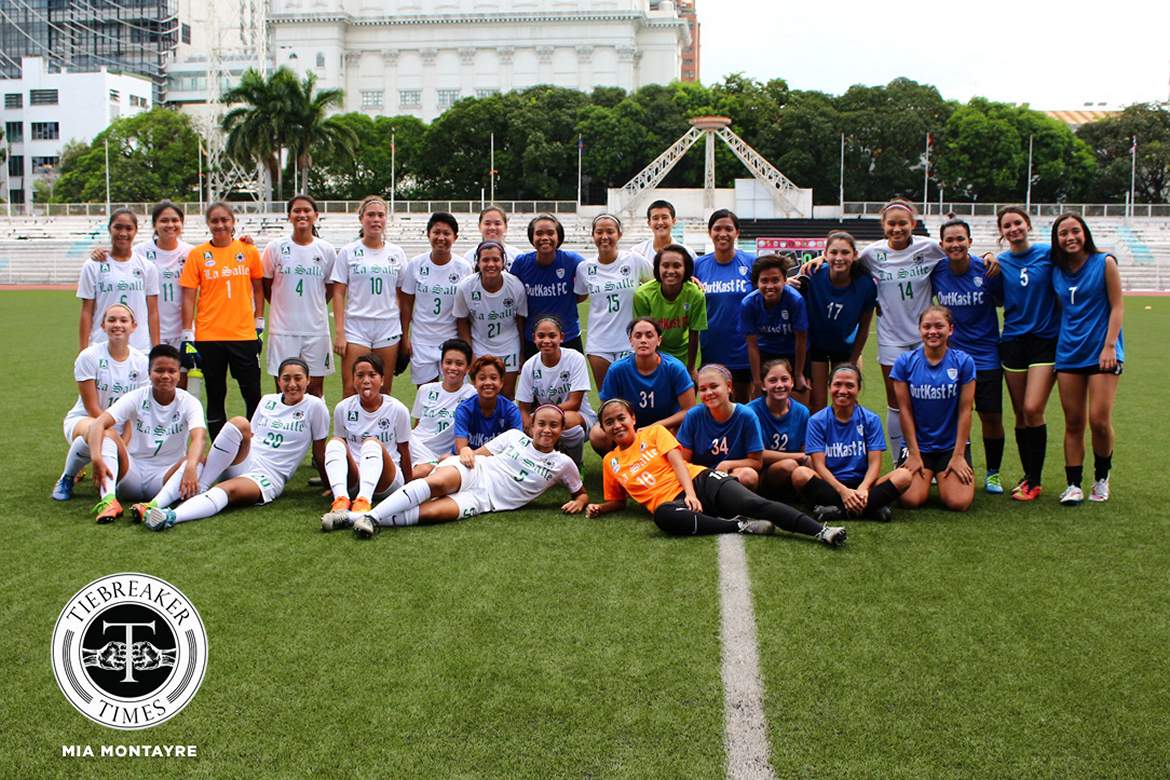 New transfer Glynnes Dela Cruz put GAU FC ahead inside 9 minutes after some confusion in the box.

Four minutes later, Annalie Martinez gathered a loose ball before darting past the Fuego Espanya defense for the first of her three goals.

In the 29th minute, Marielle Benitez’s pass to Jill Panganiban running down the left flank looked like she would score the club’s third goal but she passed it off to Martinez at the last second who tapped it in. Martinez completed the hat-trick six minutes later after taking advantage of a bad clearance.

Coach Eleonora Dillera was pleased with the win that pushed her side up the league rankings to third, happy that the ladies had stayed competitive even after the very long layoff. “The players practiced this week, Tuesday and Thursday, so I think that helped,” she said.

Playing mornings — and at 8:00am, no less — was a first for this league, but GAU FC didn’t let it bother them.

“I think the girls did what they can with the heat. They just passed the ball, less running, more of passing, letting the ball do the work more than them,” Dillera added.

The team has a lot to be excited for in the coming games, with new additions to their squad, particularly members of youth national teams.

Martinez was just as happy, later admitting it was the best game of her career.

The second game took place the following Sunday morning, and featured the only two teams who had then been unbeaten: De La Salle University, fresh off their successful UAAP stint, and OutKast FC.

Within five minutes, Irish Navaja made a forward pass that looked like it was meant for striker Kyra Dimaandal. Recognizing that Dimaandal was offside, and with OutKast defense distracted from a downed teammate, Chelo Hodges scurried for the ball after hearing no whistle, which led to a one-on-one situation with keeper Yasmin Elauria who she got the better of to put La Salle up by 1.

Six minutes after halftime, Dimaandal made a run from the halfway line before passing to Hodges, whose shot was blocked. Hodges gathered the ball and after a short pass, Dimaandal slotted in the team’s second. The goal also means Dimaandal has extended her scoring streak to six games.

La Salle’s third and final goal came in the 74th minute via Kyla Inquig. The MVP of the recently-concluded UAAP season combined with Dimaandal for a couple of quick passes before finishing at a tight angle.

OutKast FC did manage a consolation goal that came from Mea Bernal. The defender combined with Stacey Arthur and Barbie Sobredo for some nifty passing before scoring with seven minutes to go.

La Salle may have already won a title this season, but it looks like they are hungry for more.

“Coach Hans would always tell us every training na, ‘Tapos na UAAP, you gotta focus now on what we have,'” Meryll Ledesma shared after the game. The co-captain admits that it has become the motivation for the team, along with the chance to make history as champions of the new league.

Ledesma also revealed that nothing has changed for them since winning the UAAP title before turning wistful, sharing that the seniors are making the most out of their last games together.

“Ganun pa din, training, same. Same drills, polishing lang, and I guess stamina, running. Besides UAAP, we still want it to end with a bang. Kasi siyempre, we’ll never get to play with our teammates ever again,” she added.

Head coach Hans-Peter Smit joked it was timely that the league had restarted that weekend instead of the week before. “We’re lucky, I think all my girls would have hangovers, they were celebrating the whole week.”

Smit reiterated what Ledesma said about focusing on the league with the UAAP done. “Now this is the priority. I don’t like living in the past even if it’s very recent. We joined this, let’s commit.”

Determined to keep his side’s winning streak going, Smit is eyeing no less than the top. “People already know that we swept the UAAP [so] we need to live up to our reputation as far as the UAAP has gone. I think we have two more games left, if we can win both we’ll get six points from those. Then that means we topped already the first round. So, one foot inside already.”

The last fixture involved two teams that were struggling — The Younghusband FA, who were coming off successive losses in the league, and the University of the Philippines, who had finished second to last in the UAAP. It eventually turned into a back-and-forth goalfest with the club team prevailing, 4-2.

A handball after a corner in the 10th minute led to a penalty situation for TYFA, which newly transferred Kaitlyn Dabalos duly converted.

Three minutes into the second half, Cristina De Los Reyes cancelled out TYFA’s lead. Two minutes later, the captain outran her defender for a shot and UP were ahead.

UP seemed to relax afterwards and this would prove to be their undoing as TYFA decided to fight back spurred on by the club’s new younger members. In the 67th minute, Krizha Guteza Morgan leveled things up after a lapse in judgment by goalie Vanessa Estrada.

With ten minutes to go, it was Nicole Ramores who saw TYFA through, fighting for possession inside the box before slamming in the go-ahead. Six minutes later she consolidated after being left wide open.

The PFF Women’s League continues this weekend at the Rizal Memorial Stadium.