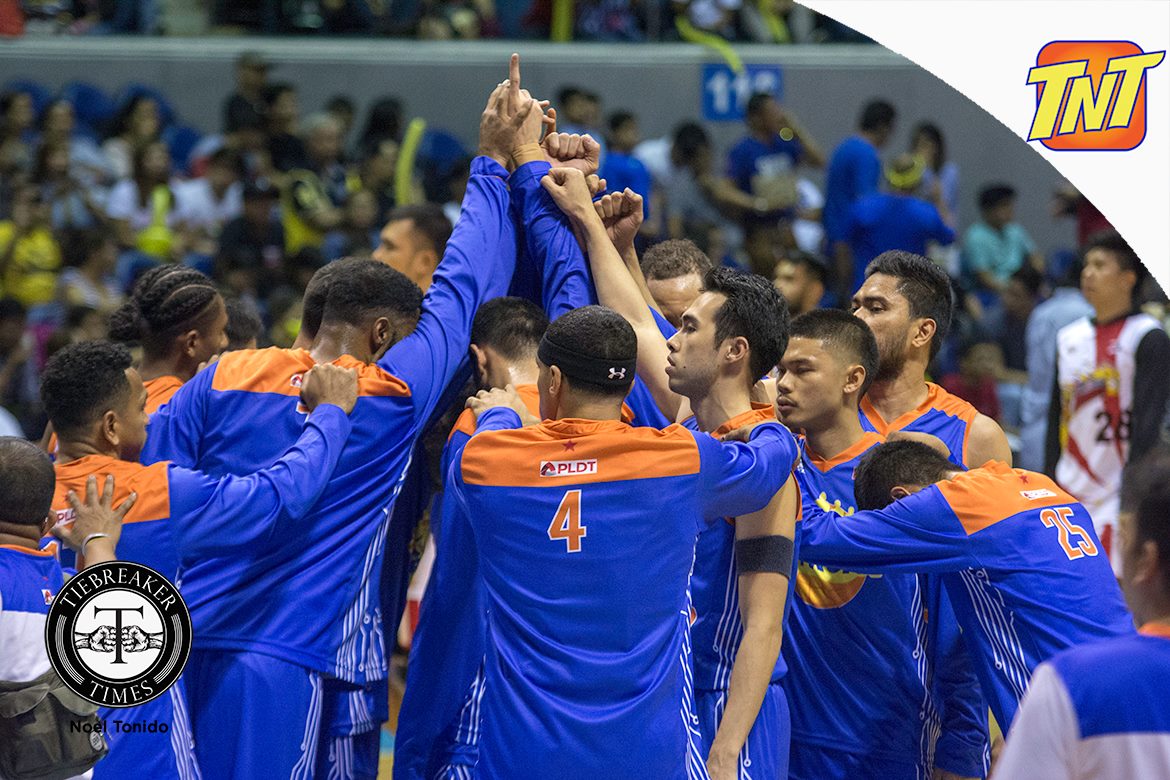 After gaining leverage early in the second half, the TNT Katropa had to overcome a San Miguel Beermen surge in the final frame, and eked out a 98-92 victory in Game Three of their 2017 PBA Philippine Cup Semifinals series, Sunday night at the SMART-Araneta Coliseum.

With the victory, the Katropa are now ahead of the best-of-seven series, leading 2-1.

“I think it’s still similar to the last game. I think it’s our defense,” said TNT coach Nash Racela on the win. “I think coach Leo did a great job adjusting his rotations and yung mga schemes niya and for a while we were surprised, but it was good we were able to recover.”

Five players led TNT’s offense, with Ranidel De Ocampo spearheading the attack with 24 points on 9-of-13 shooting along with nine rebounds. Rookie Roger Pogoy backed him up with 22 points spiked by six triples and grabbed seven rebounds. Jayson Castro had 11 markers and 12 boards.

The Katropa gained the upper hand early in the third quarter, zooming to an 8-0 run anchored by Tautuaa to post the game’s first wide gap at 12, 61-49, with 9:55 to go. But that lead faded quickly, as SMB rallied back behind June Mar Fajardo, Marcio Lassiter, and Alex Cabagnot, to end the frame at a 72-all knot.

Both squads traded blows come the final period, but the Beermen flinched first. After taking an 81-80 lead early, SMB failed to widen it further, as Seigle, De Ocampo, Pogoy, and Williams each sank baskets to lift the Katropa to a 92-86 lead with only 3:20 remaining.

San Miguel tried to rally back after four straight points from Arwind Santos and Chris Ross, 92-90, but that proved to be their final run. A Williams lay-up, plus four perfect free throws by Rosario and De Ocampo, were enough to seal the six-point victory and the 2-1 series lead.

Kelly Williams and Mo Tautuaa produced 11 and 10 points respectively. Danny Seigle, despite scoring just four points, made his presence felt as those points –both from lay-ups off backdoor cuts — were crucial in the game’s final stretch.

“Well you know, Seigle will always be Seigle,” said Racela of the veteran forward. “The veterans even [Harvey] Carey, the moment you put them in, they’re ready to do their part and contribute. Today, everybody we used contributed.”

Cabagnot and Lassiter paced the offense for SMB, each scoring 18 points on a combined 13-of-38 shooting. Cabagnot and Arwind Santos played 40 and 42 minutes in the game respectively.

Fajardo backed them up with 16 points and nine boards, despite being troubled with five fouls.

“We’re just thankful because finally the referees are calling the foul on JMF. Last game he played 40 minutes and he just had a foul. At least today they were seeing it, and they were calling that. that gave us a good chance,” said Racela of Fajardo in tonight’s game.

TNT shot 49 percent tonight, hitting 39 of their 80 attempts from the field, with most of their shots accounted from the 25 assists they had. However, they lost the rebounding battle, 49-39, and gave up more second chance points, 17-11.

Game Four of the Beermen-Katropa series will be this Tuesday, February 14, 7:00 PM, at the SM Mall of Asia Arena.