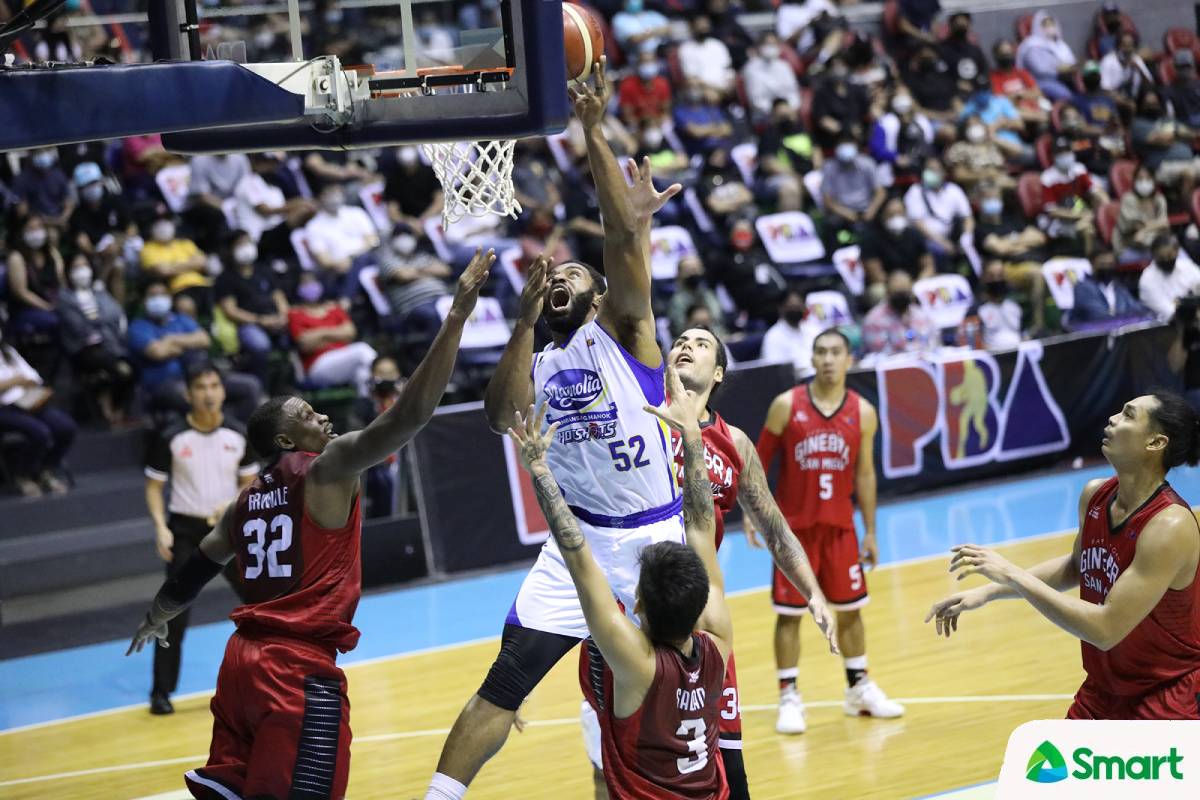 Magnolia waylaid Barangay Ginebra San Miguel by 23 points, 117-94, to conclude another chapter of the Manila Clasico in its favor in the 2021-22 PBA Governors’ Cup on Christmas Day at the SMART Araneta Coliseum.

The Hotshots broke the game wide open in the second quarter and never took their foot off the gas pedal to hand the defending champions their first defeat after starting the season-ending conference with three straight wins.

“We established the defense early, and then we limited their second-chance points,” said coach Chito Victolero. “That’s one of the key factors in this game. And then, we just want to be aggressive and control the pace of the game.”

Mike Harris showed up in his first taste of the Clasico experience with 29 points, 15 rebounds, and five assists as they seized sole leadership with a 3-0 card.

Paul Lee produced 20 points, four rebounds, and three assists, though he wasn’t able to finish the match. The 32-year-old left with 5:08 left to play as he got hurt after slipping while trying to help out on defense.

Calvin Abueva had 13 points and six rebounds. Jio Jalalon almost had another double-double with 12 points and nine assists with five dimes and three steals, as Mark Barroca and Jerrick Ahanmisi added 11 and 10, respectively.

“Medyo maganda ‘yung nilaro ng mga bata. I’m thankful to them, kasi they executed well our game plan, on both ends of the floor,” said Victolero.

Rookie Ahanmisi scored seven of his output in the second period, including the pair of free throws that sparked the pullaway as Abueva followed it up with a triple to widen their lead to 12, 34-22, with 10:48 remaining.

The gap would never come close to within single digits from that point on. The Hotshots went on to lead by as many as 31 points, 91-60, following a Jalalon lay-up off a Harris assist with 1:05 left in the third chapter.

Still, the Gin Kings showed some signs of life in the final frame. Arvin Tolentino nailed three straight treys to slice the gap to 17, 100-83, 6:17 to go.

That, however, would be their final surge. Before his exit, Lee made five straight points, before Rome Dela Rosa, Harris, Jalalon, and Barroca all joined hands to apply the finishing touches in the dominant victory.

“Yun lang naman gusto namin. We just try to go hard on every game, every possession. We want to focus on our defensive scheme, and I think we did a good job tonight, especially on defense,” said the 2018 Coach of the Year.

Magnolia’s victory was a fitting Christmas present for Marc Pingris and PJ Simon, whose jerseys were retired by the ball club at halftime.

According to league stats chief Fidel Mangonon III, this was the most lopsided Christmas Day game since Rain or Shine defeated San Mig Coffee in 2012 at the MOA Arena. The result was 98-72 in a Commissioner’s Cup affair.

The victory also marked the Hotshots’ third straight over Ginebra. They won their last two meetings in the previous bubble plays in Pampanga.

Meanwhile, Justin Brownlee led Ginebra with 21 points, 12 rebounds, and three assists. He barely had any rest as he logged in nearly 45 minutes.

Tolentino made 15 points. Japeth Aguilar finished with 14 points and 11 rebounds, Christian Standhardinger had 13 points, while LA Tenorio added 11 markers as the starters carried the load offensively for the Barangay.

Both teams will take turns facing the struggling Blackwater for their next games. Magnolia will have a crack on the 0-4 Bossing first on January 5 at 3:00 p.m., and the Gin Kings next on January 7 also at the same time slot.