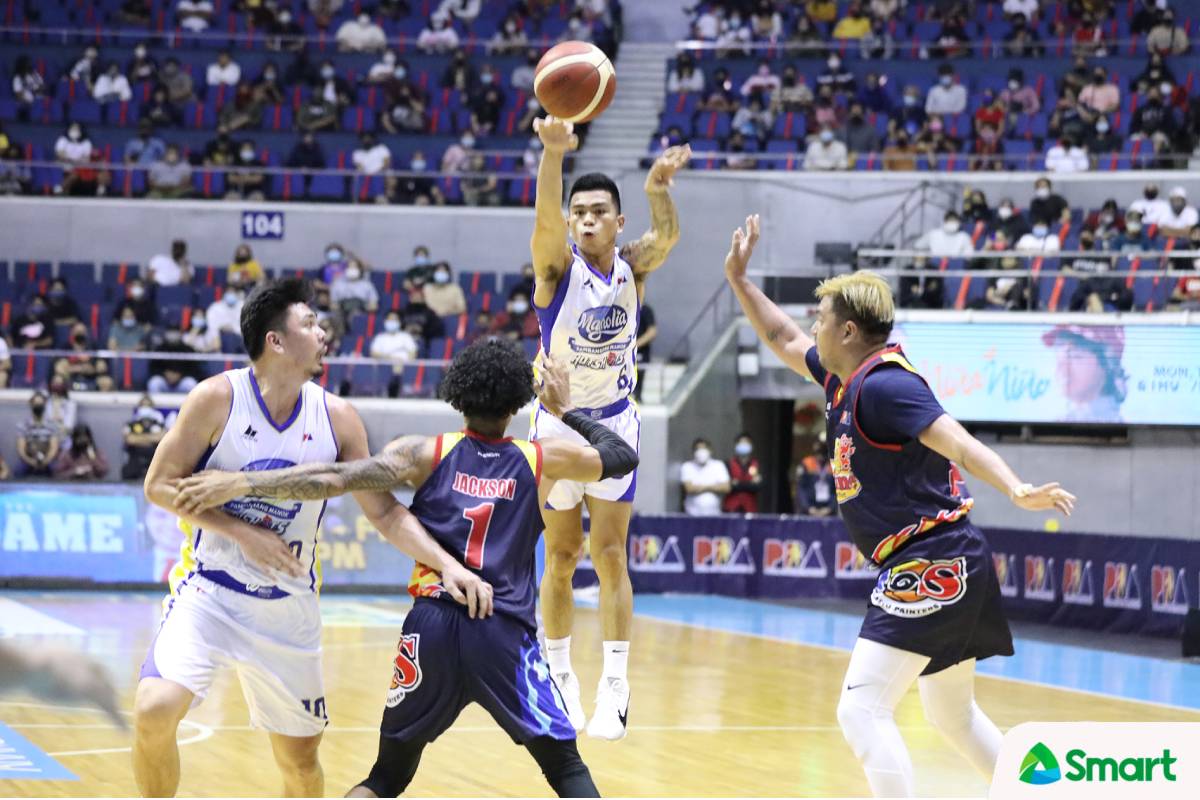 Magnolia owned Rain or Shine anew, 109-98, for its second straight win in the 2021-22 PBA Governors’ Cup, Sunday at the SMART Araneta Coliseum.

Mike Harris finished with a game-high 26 points and six rebounds as the Hotshots continued their mastery of the Elasto Painters, whom they booted out of the Philippine Cup quarterfinals in Bacolor, Pampanga.

“It started with our defense, and we want to control the pace of the game,” said head coach Chito Victolero. “I told my players before this game we need to have that mental toughness ,because we know na this is a very physical game.

“Alam naman namin ‘yung Rain or Shine, last bubble we faced them in the quarterfinals, and we had a hard time, and now also. Ang maganda lang. we continued to play defense, and we continued to execute on our offense.”

Calvin Abueva collected 18 points, nine rebounds, a steal, and a block. Jio Jalalon produced his own double-double with 14 points and 10 assists, alongside six boards. Center Ian Sangalang chimed in 11 markers.

Magnolia began to seize control of the match in the second chapter. Together with Jackson Corpuz, the aforementioned four put together a 14-4 run to turn a slim two-point lead to a 12-point advantage, 52-40, with 3:19 left.

The Elasto Painters managed to cut the deficit to five early in the third quarter. Harris and Abueva, though, joined hands to re-establish their lead to 12, 70-58, past the midway mark of the said period.

Rain or Shine still tried to mount a comeback and knocked within eight barely a minute into the payoff period, only for Jerrick Ahanmisi to spoil their plans. The rookie scored eight straight to give the Hotshots a 94-78 lead.

They went on to lead by as many as 18 points, 99-81, following Aris Dionisio’s corner three-pointer with 7:10 left in the game.

The perennial contenders also did an excellent job taking care of the ball. They only committed five turnovers while forcing their foes to make 16.

That, according to league stats chief Fidel Mangonon III, is the all-time fewest TOs in a game in franchise history, and tied for all-time fourth fewest in a game by any team in league history.

The Hotshots now have their sights set on Christmas Day, where they will take on rivals Ginebra to write a new chapter of the Manila Clasico.

Meanwhile, Henry Walker and Rey Nambatac produced 23 points apiece to lead Rain or Shine in the defeat that dropped its card to 2-2.

Javee Mocon had 20 points while Beau Belga added 14 for the Elasto Painters, who failed to replicate their come-from-behind win versus Phoenix last Friday.

RoS will have a week to recover and regroup before taking on the TNT Tropang Giga next Sunday, December 26, at 6:45 p.m.