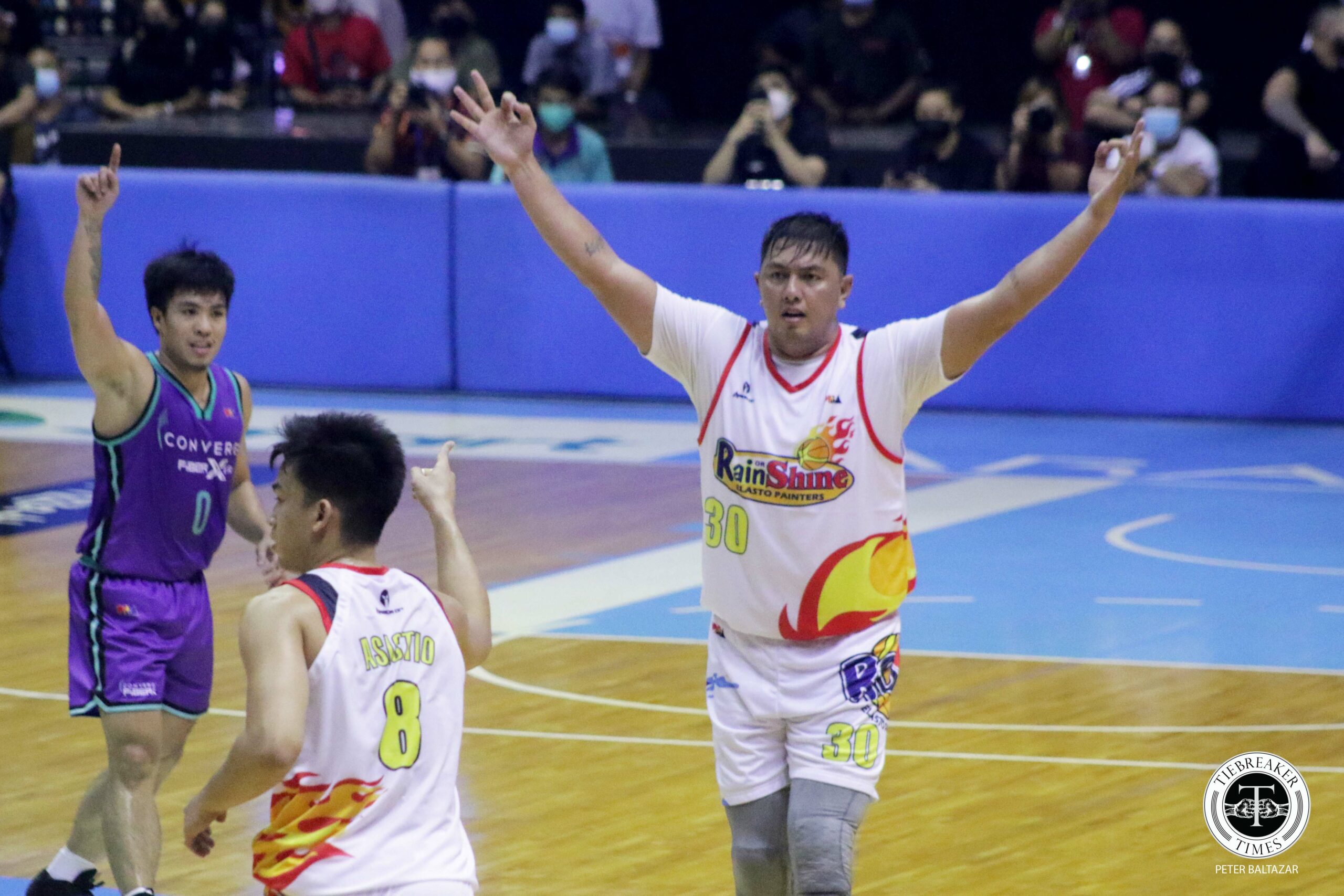 Beau Belga played the spoiler’s role as Rain or Shine denied Converge a triumphant PBA debut with a 79-77 come-from-behind victory in the 2022 Philippine Cup opener, Sunday night at the SMART Araneta Coliseum.

The veteran big man drained the go-ahead bucket with 13.4 seconds remaining, a stepback three-pointer against the defense of rookie Jeo Ambohot that negated the efforts of RK Ilagan and Jeron Teng for the new ball club.

Santi Santillan then made sure to preserve his senior’s heroics, securing the loose ball tapped by Rey Nambatac after forcing Teng to a bad pass. The sophomore forward split his freebies with 2.3 ticks left to settle the final count.

“I told Beau to read the defense because we knew that Rey would be coming to the ball,” said head coach Chris Gavina of Belga’s shot.

“Beau was able to fake the handoff and turn, he got himself open, and the thing I love about Beau, he’s never scared of the big moment or taking the big shot, which really helped us with this win tonight,” he added.

Santillan top-sored for the Elasto Painters with 18 points and nine rebounds. Belga provided 17 markers on a 4-of-8 clip from deep.

Second-year guard Andrei Caracut and Norbert Torres supplied 10 points apiece in the victory, with the latter adding 10 rebounds to his name.

Caracut helped spark the turnaround, drilling a triple to start a 9-0 run that flipped a seven-point deficit to a 75-73 lead with 1:34 to go.

Converge was able to retake the upper hand behind the free throws of Ilagan and a lefty lay-up by Teng with 23.5 seconds left, but all that got wiped away when Belga hit the booming trifecta after a series of moves he rarely does.

That proved to be the beginning of the end for the FiberXers as the Elasto Painters went on to start their season on a high note.

“With the way we ended the last conference… It was extremely important for us to come out and be able to seal this tough gritty win against Coach Jeff [Cariaso],” said Gavina as Rain or Shine missed the Governors’ Cup playoffs.

“I give a lot of credit to my guys, from Beau to Norbert, Santi, really having a man up mentality,” added the seasoned mentor.

Rain or Shine will now look to make it two in a row when it takes on NorthPort on Thursday, June 9, 7:15 p.m. at the Ynares Center in Antipolo.

Teng led Converge with 23 points and 13 rebounds in the loss. Alec Stockton backed him up with 13 points, as Ilagan added 10 markers.

The FiberXers will look for their breakthrough win when they take on last year’s finalists Magnolia on Friday, June 10, 6:00 p.m. also at Ynares.