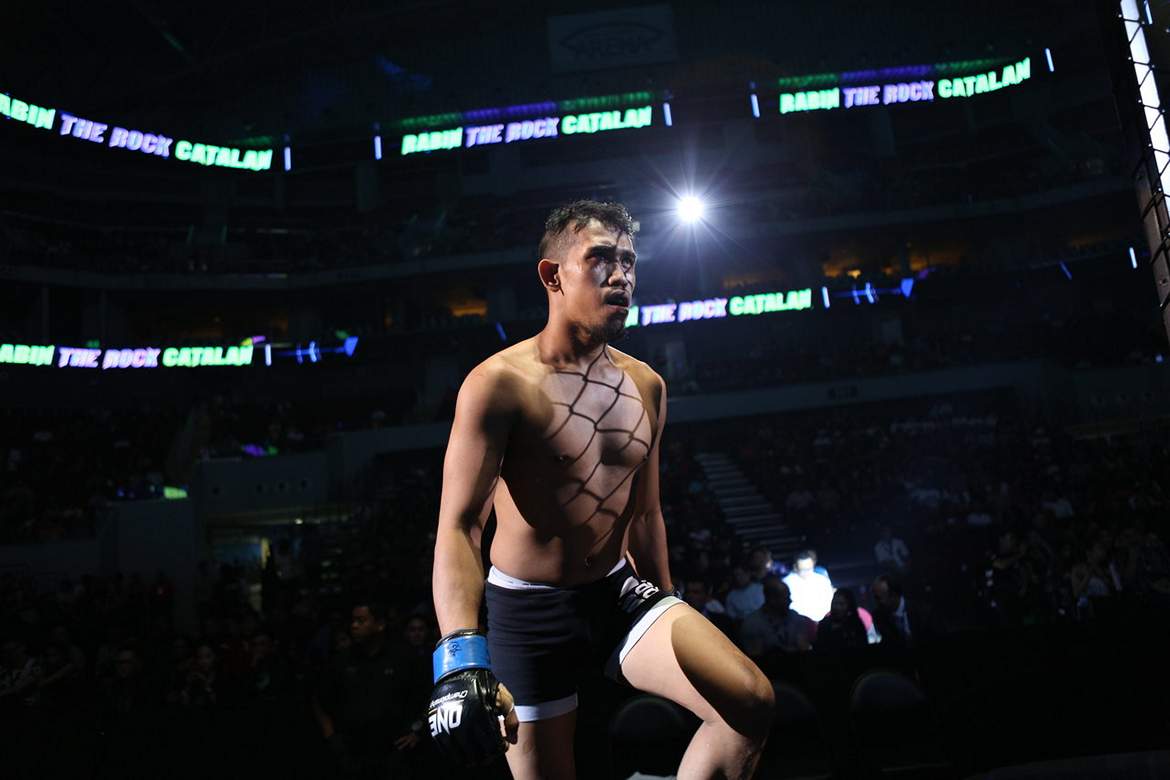 It was a bitter pill to swallow for Filipino fighter Rabin “The Rock” Catalan when his maiden appearance on an international mixed martial arts stage 10 months ago did not go into his favor.

The 30-year-old native of Iloilo City lost his ONE Championship debut via second-round technical knockout at the hands of Team Lakay’s Joshua Pacio in April 2016.

Catalan had difficulties in dealing with the stoppage setback to Pacio, prompting him to shy away from the spotlight and assess his future in the sport

With the help of his brothers-in-arms at Mindanao Ultimate Mixed Martial Arts (MUMMA), Catalan reignited his desire to compete in MMA.

Based in Cagayan De Oro City, Misamis Oriental, MUMMA houses the best and the brightest MMA talents in the Philippines’ southernmost major island of Mindanao, including Catalan and Rocky Batolbatol.

Catalan revealed that he draws his inspiration to continue his professional MMA career from his MUMMA teammates.

“They are always there for me. My teammates uplifted me when I was down and out. I’ve found a family in my comrades,” he said.

“Now, I am inspired to go back inside the cage and put on a great performance.”

Catalan is slated to return to action as he squares off with Thai standout Pongsiri “Punhod” Mitsatit on the undercard of ONE Championship: Warrior Kingdom, which takes place at the 12,000-capacity Impact Arena in Bangkok, Thailand on Saturday, March 11.

An undefeated prospect from Chiang Mai, Thailand, Mitsatit holds a stellar win-loss standing of 7-0, with five knockout triumphs and one submission victory.

According to Catalan, he is in the best shape of his eight-year prizefighting career. The 5-foot-4 MUMMA representative stressed that he is eager to put himself back on the winning track at the expense of Mitsatit.

“With the help of my teammates, I had a great training camp. They made sure that I am prepared in both stand-up and grappling aspects of the fight. I can really say that I am in awesome shape,” he stated.

“My team gives me so much confidence, heading into this bout. I am hungry to win this fight, and I want to get this win for them.”

Aside from Catalan, three other Filipino combatants will don the Philippine colors at ONE Championship: Warrior Kingdom, which is headlined by a five-round championship clash between ONE Women’s Atomweight World Champion Angela Lee and top contender Jenny Huang.

Pacio is set to lock horns with former ONE Strawweight World Championship Dejdamrong Amnuaysirichoke in a three-round contest.