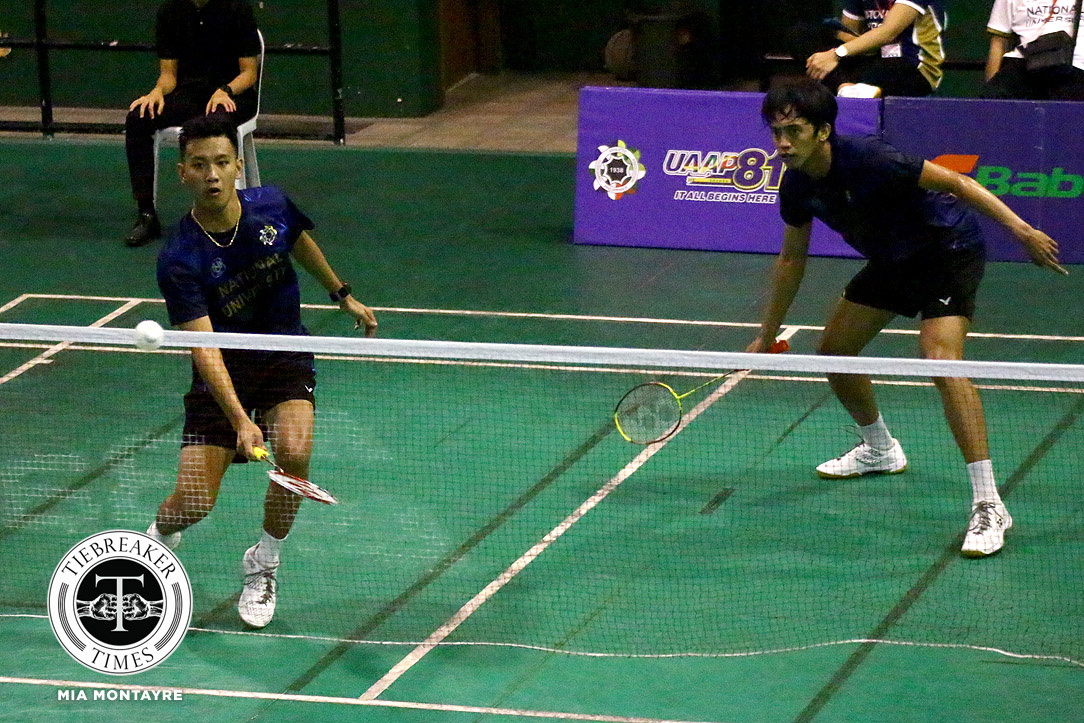 The battles in Day 6 of the UAAP Season 81 Men’s Badminton tournament resulted to an incredible streak and the post-season berths being finalized, Thursday morning at the Rizal Memorial Badminton Hall.

The reigning four-peat champions National University Bulldogs remain unscathed for the 40th straight tie, five in the current season, to inch closer to another Finals appearance, even as De La Salle University closed the semifinals door on the Adamson University side.

The Bulldogs from Bustillos was dominant in the 5-0 conquest of the University of Santo Tomas with former Most Valuable Player Ros Pedrosa coming out of another close three-setter past John Christian Yabut. Afterwards, Mike Minuluan squeezed past Henrick Peralta to make it 2-0 for the defending kings.

Alvin Morada and Alem Palmares then fended off Paolo Barrios and Juan Miguel Santiago in two 21-19 games to send National U to the cusp of another championship series.

Minuluan and Dawn Cuyno reunited in the win past Russel Enriquez and Josh Defensor, while former FEU Tamaraw Estaco Bacaslo III got his ifrst win as a Bulldog with sweep of Lorenzo Del Rosario.

National U sits atop at 5-0, as UST slipped to 1-4 and is out of contention for the semis. 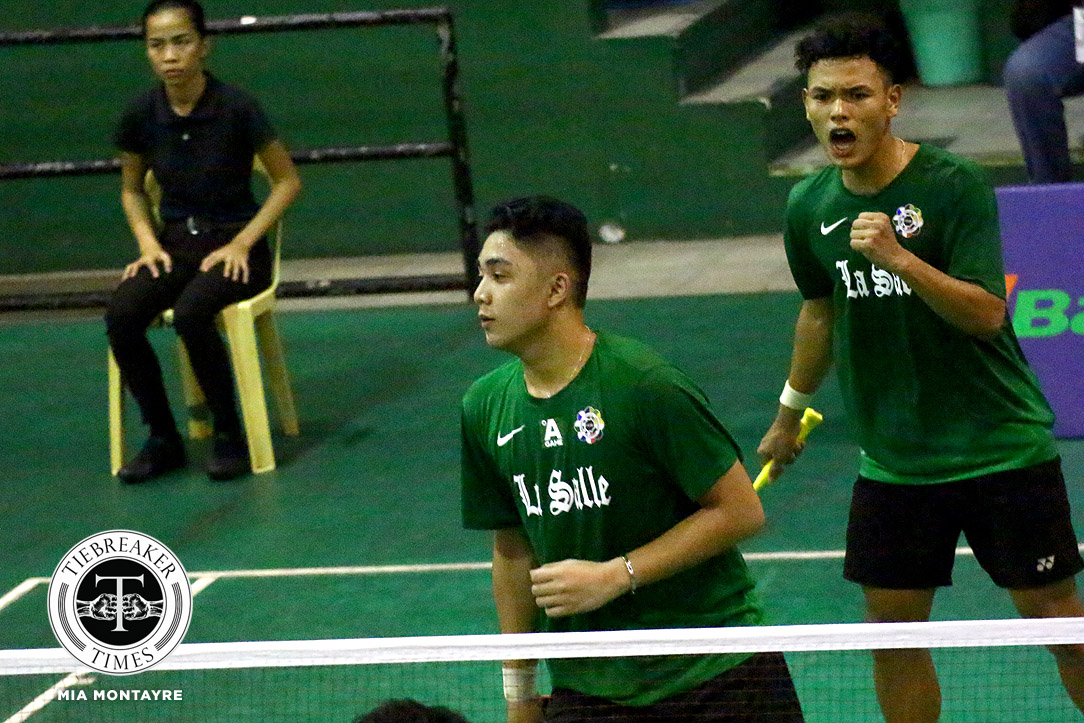 On the other hand, La Salle stopped Adamson’s dreams of making it to the Final Four with a crushing 4-1 win.

The win put the Taft-based squad at 3-2, while the Falcons ended their campaign at 2-4.

Cayel Pajarillo showed up for the Green Shuttlers in the first singles match over graduating Kevin Fabros in two tight sets, before Niel Pineda also took down Johnrick Macabenta in two games.

For just the second time this season, and as needed, La Salle senior Pajarillo finally clinched both of his assignments as he and Bless Linaban secured the win for the Green and White over Macabenta and Elben Concha in the first doubles match.

Paolo Malabanan and Pineda finished Fabros and Gelo Zerna in two in the second doubles match, but Adamson’s Concha averted a sweep after dragging down Louie Khairial in the third singles. 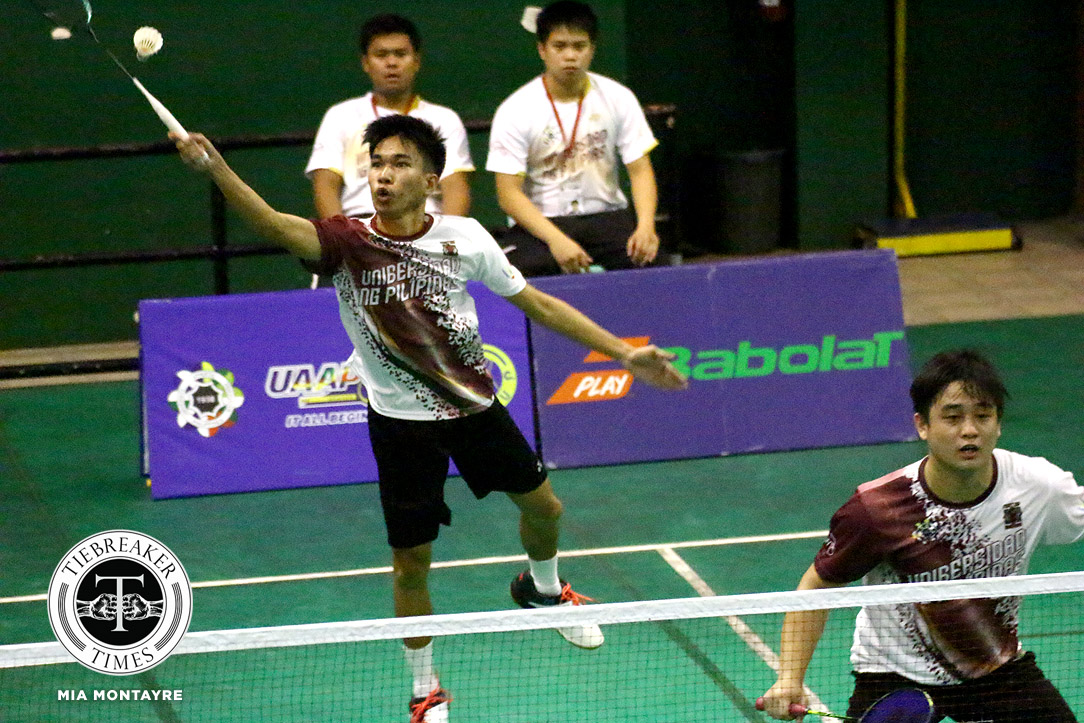 Nonetheless, all eyes went to Court 3 in the crucial tie between neighbors University of the Philippines and Ateneo de Manila University which both carried 3-1 standings prior to the match.

In the first singles match, UP’s Bernardo did not left it to chance and bounced back from his first loss of the season, finishing off Ateneo captain Carlo Remo despite the latter’s attempts at comeback.

To make things interesting, Bernardo’s batch mate but on his second playing year, Michael Clemente finally clinched a singles win this season, coming back from a first-game shell-lacking from Fides Bagasbas to emerge with the 2-0 advantage for the Maroons. After the tie, the Isko said, “Yung pinaka-nag-motivate sa ‘kin is ‘yung sinasabi nila na hindi lang dapat sila JM yung umiiscore, dapat lahat mag-step up.”

Remo and Keoni Asuncion took one back for the Ateneo after a well-played contest past UP captains Bernardo and Vinci Manuel in the first doubles match in three games.

It was then up to Betong Pineda and rookie Harvey Tungul to deliver and they did, dominating Sean Chan and Bagasbas in the second doubles match to take the all-important 4-1 record for the Diliman-based side. Ateneo then slipped to 3-2 on a similar record to La Salle.

#ReadMore  No regrets for Adamson Pep: 'We'll soar from here'

Asuncion kept his third-singles record intact, denying rookie Kyle Legaspi of ground towards the Rookie of the Year award with a hard-fought win.

For the Fighting Maroons, the NU loss is part of the learning process. Their captain Manuel shared, “Versus NU, we don’t have high expectations. We just gauged kung hanggang saan kami and we just used what we learned from there here against Ateneo.”

With twice-to-beat advantage on sight once again, the senior UP standout also added, “Hindi naman perfect tong nilaro namin, may makukuha pa rin kami, so we’ll use that against La Salle.”

The Bulldogs (5-0) will go for the outright Finals berth against the Univeristy of the East (0-5) on Saturday, October 6. On the same day, the Fighting Maroons (4-1) will take on the 3-2 Green Shuttlers, while the Blue Eagles (3-2) will take on the Golden Shuttlers (1-4). All ties will have their first serves at 8 am.