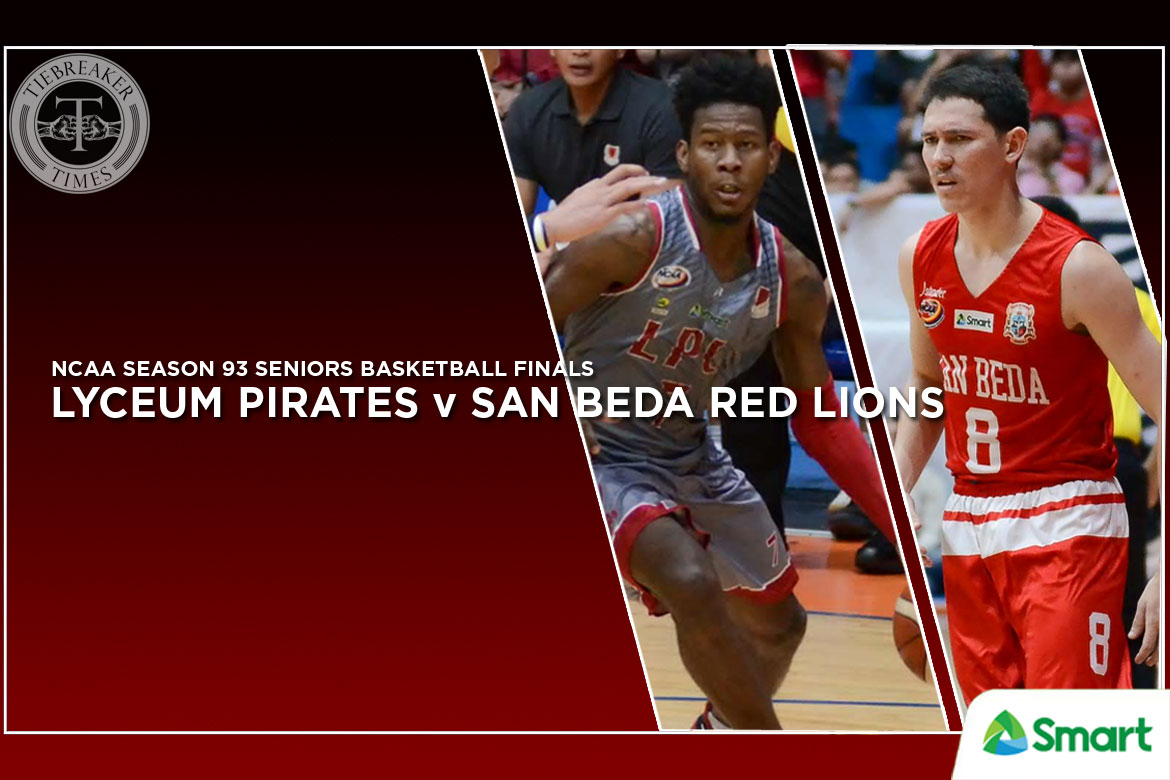 The entire NCAA season has been building up to this very moment. Though there are 10 teams in the Grand Old League, all eight have been pretenders, to say the least. The Lyceum University of the Philippines Pirates and the San Beda College Red Lions have played in a league of their own.

But while one team might have finished the elimination round with an immaculate slate, and the other has been a staple in the Finals series for 12 straight seasons, neither team wants to take the mantle of “favorites” heading into the best-of-three affair.

For third-year Lyceum head coach Topex Robinson, his case is that he does not know how his team will react to the bright lights of a big venue like the SMART-Araneta Coliseum.

“At the end of the day, San Beda’s the stronger team and they have more experience than us. Their experience showed against San Sebastian and we know what we have to face,” said Robinson, as the only two student-athletes he has who have finals experience are CJ Perez and Ralph Tansingco, when he was with National University.

“Again, they’re the more experienced team with coach Boyet and they have a good group of guys that are motivated to show that they are the defending champions,” the amiable mentor pointed out.

On the other end, San Beda have yet to defeat Lyceum this season, which is why Boyet Fernandez is entering the finals with a mindset that they are the underdogs — an anomaly for the stories of Red Lions squads.

“As what I’ve said, right now Lyceum is the best team. Right now, because they beat us twice. So underdog kami,” said Fernandez, who holds the experience edge over Robinson.

The match-up between arguably two of the top talents in the collegiate scene will be the highlight of this potentially epic series.

CJ Perez, a PBA-ready talent, has been the catalyst for the biggest turnaround in the NCAA’s 93-year history. A runaway winner to bag this year’s Most Valuable Player plum, he is averaging all-around numbers of 19.3 points, 6.5 rebounds, 3.6 assists, and 1.9 steals per contest.

But the last time the 23-year-old stepped into a big game like this was four years ago, when he was still playing with the San Sebastian Golden Stags. Will he sink or will he swim under the bright lights?

Standing accross him will be the favorite to win this year’s College Player of the Year, Robert Bolick.

Bolick, another PBA-ready talent, has had a spectacular year, winning the MVP crown in both the pre-season tournaments and the PBA D-League. This season, he is averaging 13.0 points, 5.4 rebounds, and 5.2 assists per game. But the question is, can he help stop Perez, who holds a distinct height and length advantage over him?

For all the love CJ Perez has been getting, it is team captain MJ Ayaay who has glued the Pirates together.

Standing at just 6-foot-1, Ayaay has played at least three positions on a nightly basis for Lyceum. And he has done so with success, with averages of 9.9 points and 7.4 rebounds.

Off the court, he has been the Pirate that his team goes to in times of need and has been the added voice needed by Robinson.

But his San Beda counterpart, Javee Mocon, has been playing out of his mind this season, averaging double-double numbers. With Mocon’s winning pedrigree, can Ayaay negate this even for just two games?

Davon Potts, who has already been drafted to the PBA, has underwhelmed in his final year in San Beda.

His numbers, compared to last season, have been down across the board this year, averaging a measly 6.7 points in just 21 minutes of game time.

But seeing that it’s hard to get stops against the Pirates, maybe Fernandez should tweak his rotation a little bit, sacrifice defense for offense to try to run Lyceum out of the building. And Potts has proven that he has the tools to do this.

In the past 11 years, only two squads have successfully dethroned the Red Lions: the 2009-10 San Sebastian Golden Stags and the 2015-16 Letran Knights.

It will be tough, but the Lyceum Pirates have the same hunger as both of those squads — or may even be hungrier. If they stay motivated, Lyceum will be the third team in 12 years to beat the Red Lions.