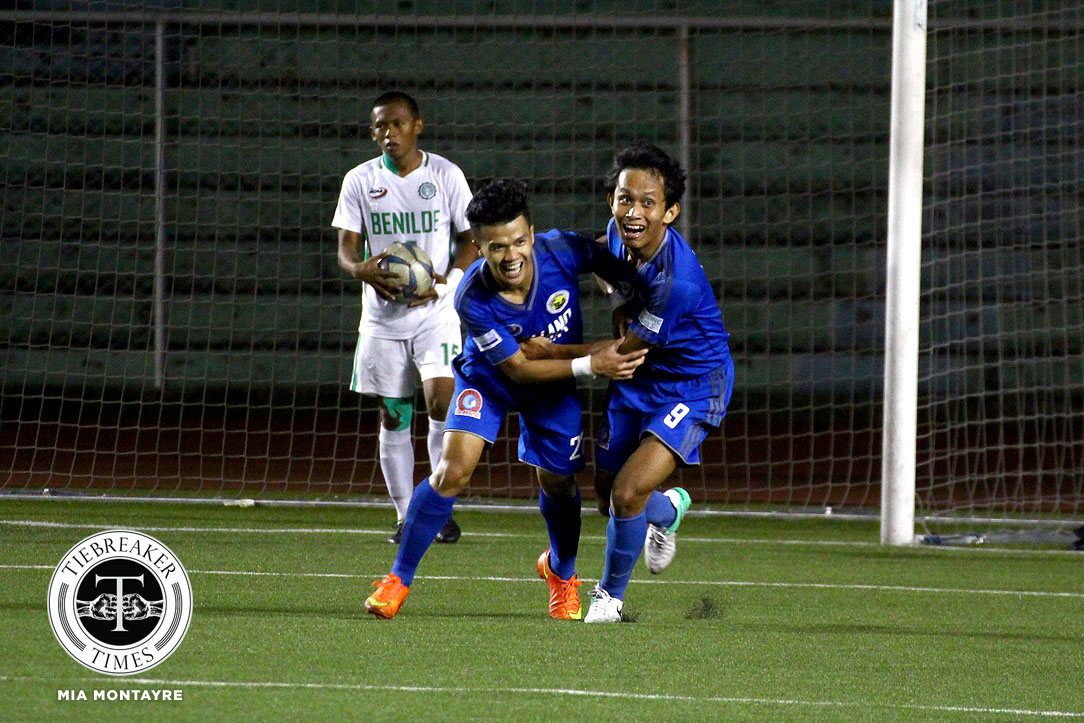 NCAA Season 91 Most Valuable Player Jumbel Guinabang has scored twice. But no goal was as huge as his second in extra time, propelling the Arellano University Chiefs to take Game 1 of the NCAA Seaosn 93 Seniors Football Finals from the College of Saint Benilde Blazers, 3-2, Friday evening at the Rizal Memorial Stadium.

Right from the get-go, the action was intense, as both teams plucked two goals. Guinabang ​received a good long delivery and ​swiftly took the opening goal just three minutes from kick off. However, the lead did not last long, as Daniel Liozo equalized just seconds after for Saint Benilde.

In the 26th minute, the Chiefs once more intercepted a Benildean pass in the midfield before Charles Gamutan made a speedy run to the opponent’s goal for the second go-ahead shot past Jake Vicen.

​Saint Benilde skipper Renz Tulayba might have taken four minutes to put the match back on level terms, but it was a similarly well-executed counterattack that knotted the score at two apiece.

Gambling on positional changes in the second half, the Season 91 kings almost paid for it. The Blazers pounced on opportunities to take the upper hand in the following period, with returning Dean Ebarle and semis hero Wilmer Lopes knocking on the blue-shirts’ door. However, the forwards were not able to convert these chances, as Arellano keeper Jericho Desalisa kept himself busy.

#ReadMore  Qualls says he got called the N-word, clears air on step on Varilla

The situation continued well into the extra time before Saint Benilde almost ran away with the match winner. Carmelo Genco fired from the top of the penalty box, but Desalisa did well enough to parry the shot for a corner kick. The Blazers froze after that missed opportunity on the set piece, as an errant pass was once more picked up by the Chiefs

Defender Patrick Bernarte found himself with the ball and sped to Vicen’s goal. The wing back found Guinabang up front and the former MVP wasted no time to slot the ball into the goal for the clincher with just three minutes left in the extension.

Arellano (1-0) will shoot for their second title in three years when they clash with Benilde (0-1) again on Monday, January 15, at 6pm.