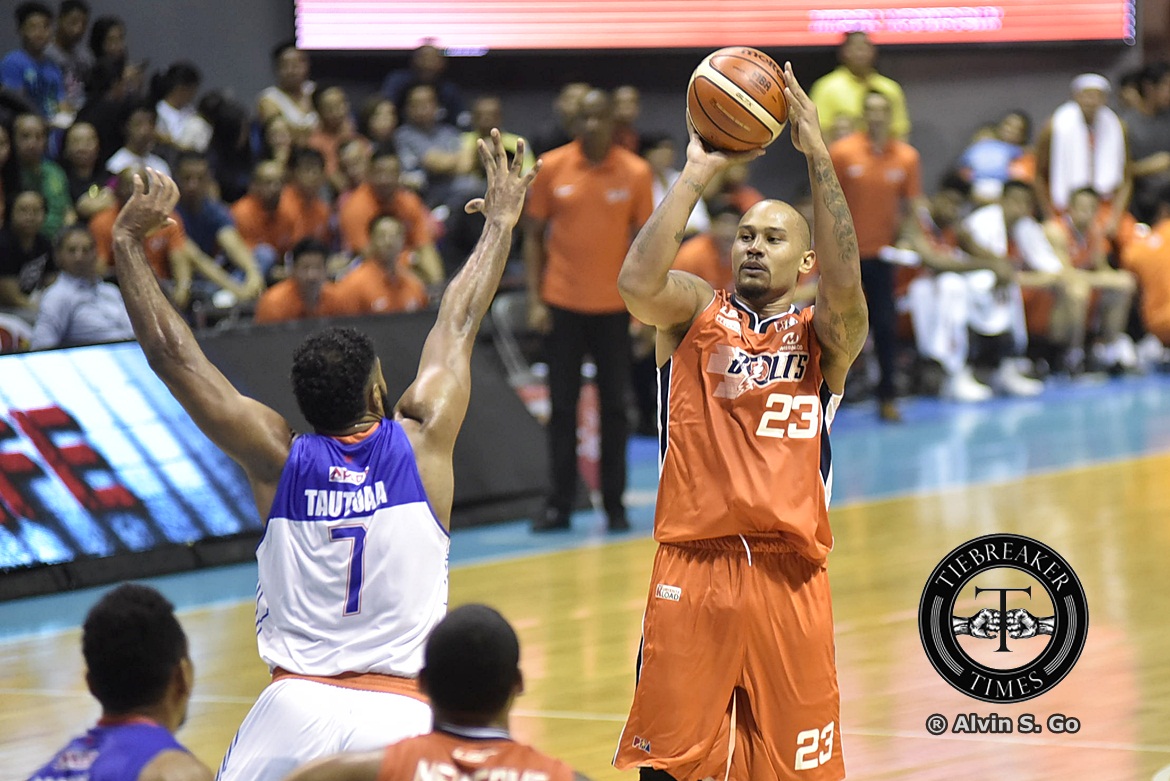 The last time Kelly Nabong saved the Meralco Bolts was last April 16, when they overpowered Greg Smith and the Blackwater Elite to the tune of 11 huge points in the payoff period alone, to prevent being chopped by the upset axe.

After over a month, the 6-foot-6 bruiser rose into the occasion and played the hero’s role once more on Wednesday night. This time, though, the stakes were higher.

The Bolts prevented a sweep from taking place, taking Game Two of their best-of-three quarterfinal series against TNT Katropa to get even, 103-100, in overtime — the period in which the Filipino-American forward showcased his saving grace.

Nabong scored seven, including the game-clinching charities with two seconds left, of his 15 markers in the game’s extra five minutes — just a point shy of matching the whole Katropa’s output in the said span.

It was yet another display of how vital Nabong can be when needed, given the Bolts are already a stacked unit. But for the 28-year-old, the victory was not just about him; it was the team as a whole who made it possible.

“We had to come together as a team,” said Nabong moments after their bout at the SMART-Araneta Coliseum.

“Our import fouled out so we had to come together as a team and lock down on defense. They have a big import!”

As what Nabong had stressed, his effort was not solely on offense — he had to get in front and defend Katropa mport Joshua Smith, who provides a hulking presence near the rim with his wide-bodied frame.

“[But] we did our job as a team and came out with the W. That’s all I can ask for,” said Nabong of Smith.

As the Bolts now have a chance of making it into the semis, Nabong is hard-pressed to advance. And that motivation of his stems from his desire to win a championship for Meralco, something they had failed to do back in the 2016 Governor’s Cup.

“I don’t want to be too over-confident. But I really trust coach Norman [Black], our coaching staff, and I believe one hundred percent in my teammates that we want to go back to the Finals. Again.

“And we want to win it this time and not come second,” he declared.