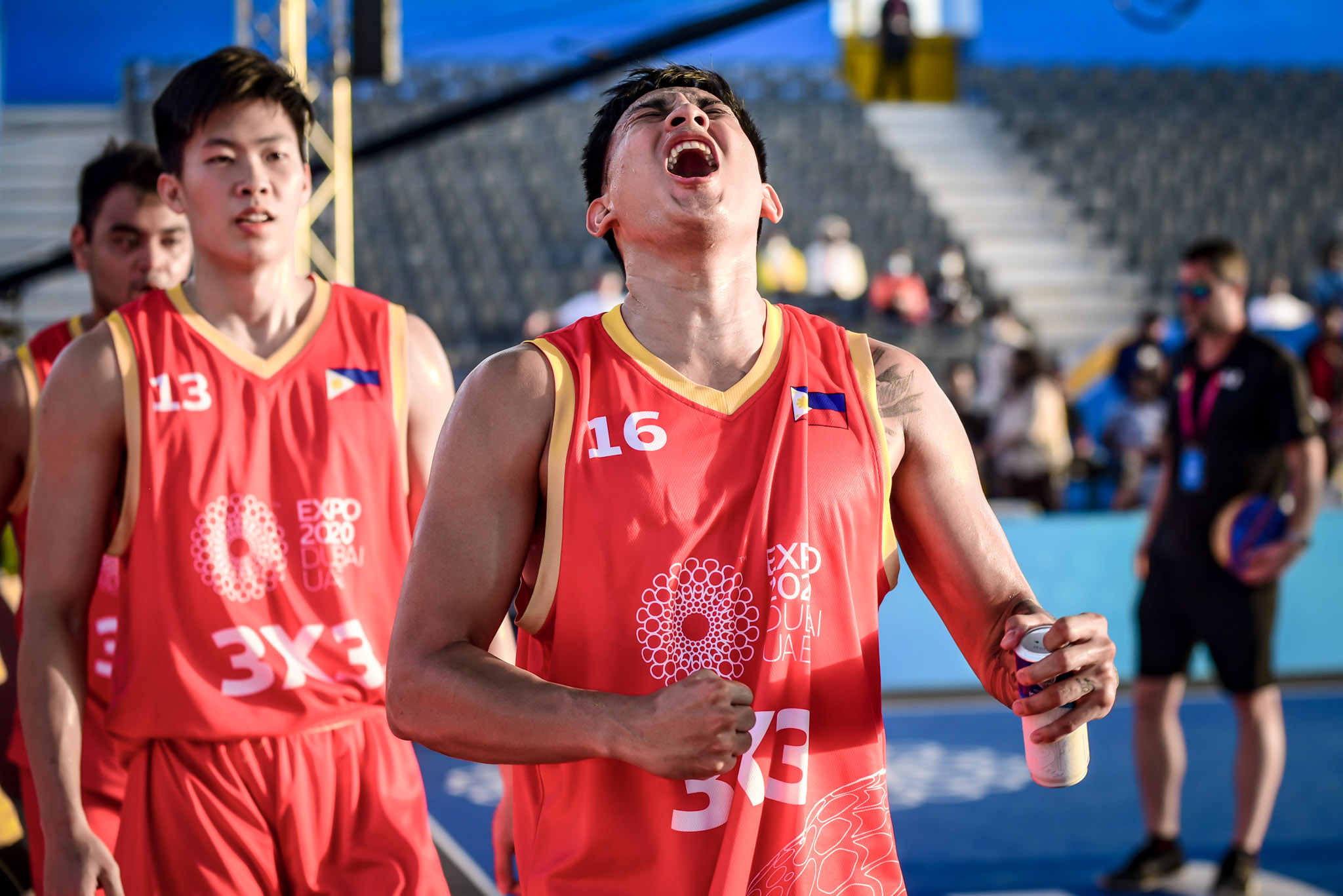 The big guns will be in town as Chooks-to-Go FIBA 3×3 World Tour Manila Masters unfolds on May 28-29 at the Ayala Malls Manila Bay.

Let’s meet the teams who will be bringing world-class 3×3 basketball action to Manila.

When it comes to big guns, there is no one bigger in 3×3 basketball than UB Huishan NE of Serbia.

The world’s top-ranked team immediately marked their territory in the FIBA 3×3 World Tour by winning the Utsunomiya World Masters last May 14-15.

The world’s number two ranked team will be looking for its first-ever championship in Manila.

Antwerp will be bannered by three members of the Belgian 3×3 national team which placed 4th in the Tokyo Olympics – 6-foot-5 Thibaut Vervoort, ranked 4th in the world, 6-foot-5 Nick Celis, 5th in the world, and 6-foot-6 Rafael Bogaerts, ranked 15th. Completing the squad is the 36th ranked 6-foot-5 Bryan De Valck.

Liman will be out to prove that it is the top Serbian team in 3×3 basketball. Liman fell in the quarterfinals in Utsunomiya.

Liman will feature three members of the Serbian 3×3 national team which edged Belgium for the bronze in the Tokyo Olympics. These are 6-foot-7 Mihailo Vasic, 8th in the world, 6-foot-4 Aleksander Ratkov, ranked 11th, and 6-foot-8 Stefan Kojic, ranked 12th. The 4th member of the squad is 6’0 Kilijan Nebojsa, ranked 20th.

The team will be led by playing coach and Canada’s top 3×3 player, the legendary Steve Sir. He will be joined by Mongolia’s top player, 6-foot-4 Delgernyam Davaasambuu 57th in the world ranking. Providing the muscle down low is the 77th ranked 6-foot-6 Otgonjargal Tsogt and 61st ranked 6-foot-3 Dulguun Enkbat.

One of the most exciting young names in 3×3 basketball will be coming back to Manila.

Six-foot Gan-Erdene Gantsolmon, 88th in the world player ranking, was sensational in the Ulaanbaatar Super Quest where he averaged a whopping 12.6 points per game to lead the world’s 22nd best team Zaisan to the title.
With him on the Zaisan roster are big baby, 6-foot-5 Altangerel Batsaikhan, 154th in the world, 6-foot-2 Ikhbayar Chuluunbaatar, ranked 188th, and 6-foot-3 Ganbaatar Nyamdorj, ranked 190th.

The 25th ranked team in the world, Warsaw made the finals of the Dubai Expo 3×3 Super Quest where they lost in overtime to Antwerp. They dominated Olympic gold medalist and world number four Riga of Latvia in the semifinals, 21-12.

Cebu Chooks finished 6th in the Dubai Expo 3×3 Super Quest. They followed this up by emerging champions of the Asia Pacific Super Quest in April – the Philippines’ first title in the FIBA 3×3 pro circuit in eight years. They continued their impressive run with a quarterfinal finish in the Ulaanbaatar Super Quest.

The Manila Chooks squad will have its own version of the twin tower in 6-foot-10 Henry Iloka and 6-foot-9 former FEU Tamaraw Ken Holmqvist. With 6-foot-6 Dennis Santos, Manila Chooks will have the size to match the European teams.

But Manila Chooks will go as far as their ageless leader Chico Lanete takes them. Lanete proved he still has plenty of gas left in the tank when he hit two game-winners in the Ulaanbaatar Super Quest to lead Manila Chooks to a semifinal finish last May 6.

This was a fitting follow-up to their final four finish in the Chooks-to-Go Asia Pacific Super Quest.

Sansar MMC Energy will be bringing back three players from the squad that finished 2nd in the Asia Pacific Super Quest.

A pair of lengthy and athletic 6-foot-5 gunners – Anand Ariunbold, 136th in the world, and Enkhbaatar Onolbaatar, 160th, will be Sansar’s main weapons. Also returning is 208th ranked 6-foot-2 Gansukh Avarzed. They will be joined by 6-foot Batzolboo Borgil who was part of Sansar when they made the quarterfinals of the Ulaanbaatar Challenger.

Gurugram 3BL will be the tallest team in the Manila Masters.

Six-foot Inderbir Gill, largely considered the best Indian-origin point guard in the world, is a veteran of the 3×3 circuit in India and Japan.

Six-foot-seven Bikramjit Gill, who played US NCAA Division I basketball for Ball State University, is the former MVP of the Japan 3×3 professional league.

Zavkhan will be the youngest team in the competition with no player above 22 years old.

Five-foot-10 Enkhsaikhan Bayarsaikhan is expected to shoulder the offensive load for Zavkhan. World number 156th Batzayaa Tsermaa, who stands 6-foot-3 and a half, will be backstopping him. 175th ranked Munkhtur Khureltogoo, at 6-foot-4, and 196th ranked 21-year-old Avirmed Lhagvaa, at 6-foot-5, will have their hands full defending the behemoths of the other teams.

Six-foot-five Andrew Steele and 6-foot-3 Tom Wright had Melbourne humming during the Asia Pacific Super Quest where they blew out their first two opponents. Unfortunately, they ran into the red-hot Gan-Erdene Gantsolmon who almost single-handedly booted the Aussies out of a semifinal spot.

This time around, Steele and Wright will be joined by 6-foot-7 Greg Hire. The trio won the FIBA 3×3 Asia Cup in 2019. Providing more size for Melbourne is 6-foot-8 Jesse Wagstaff.

Yokohama has been busy competing in FIBA 3×3 events in Mongolia in their preparations for the Manila Masters.

In the Ulaanbaatar Super Quest, they were a point away from making the semis until a Chico Lanete long-distance bomb eliminated them from the competition.

Yokohama will be the shortest team in the field. Their tallest player is Serbian import Lazar Popovic at 6-foot-4. The rest of the squad are 6-foot-3 Alexis Minatoya, 6-foot-2 Tatsuhito Noro, and 6-foot Jun Iwasa.

The Kiwis will have the size to compete with just about any team in the competition.

Six-foot-eight, 265 lbs Zach Easthope will be an immovable force in the low block. 6-foot-5 Samuel Aruwa will also be providing some inside muscle for Auckland.

Six-foot-one Chris McIntosh and 6-foot-3 Ben Castle will be their main outside bombers.

Easthope, Aruwa, and McIntosh were part of the recent 3×3 New Zealand Tall Blacks training pool which formed part of their build-up for the Manila Masters.