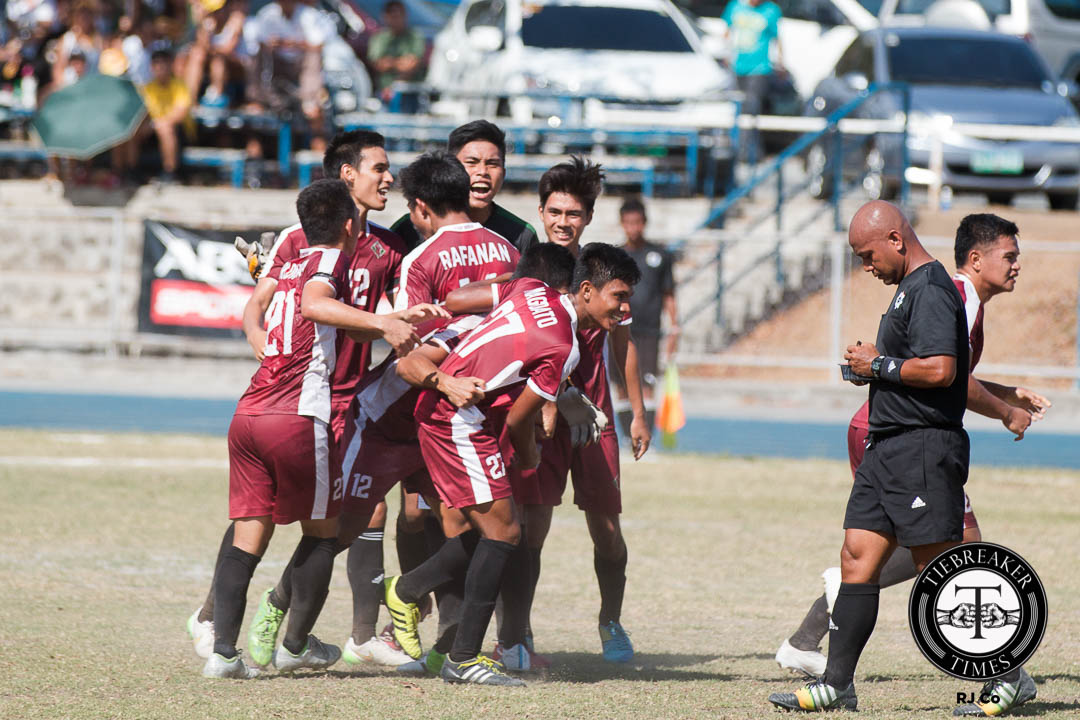 In quite an unpredictable season, one thing was made sure today. There will be a new UAAP men’s football champion in Season 78.

The FEU Tamaraws, winners of the two most recent championships, had already played their last game this season, losing 1-0 to the in-form UP Fighting Maroons at the Moro Lorenzo Football Field.

Kyle Magdato supplied the decisive touch as his strike at the stroke of half time was enough to not only eliminate FEU from title contention as it also secured them the top seed entering the Final Four.

It was a pretty cagey affair between the two traditional powerhouses of UAAP football. Chances were few and far in between in the opening minutes of the game. The first good attempt happened at the 12th minute mark when JB Borlongan’s corner went towards King Miyagi. The rookie managed to get a touch but it wasn’t too strong as Paolo Bugas cleared his effort off the line. The clearance enables UP to resume the attack ended by Ian Clarino firing wide.

The following chance took place at the 28th minute, still from the relentless Fighting Maroons. Daniel Gadia fired a shot from outside the box which forced a routine catch from RJ Joyel. It may not have changed the score but it made the game livelier. Five minutes after Gadia’s saved attempt, Audie Menzi took a turn for the FEU Tamaraws. He made space for himself but blew his shot off the mark.

The Maroons responded as soon as the next minute with a pair of good hits from rookie Borlongan. The first one was caught well by Joyel who then gave the ball back quite easily to the Maroons. Borlongan registered another attempt, but it went wide in his second try.

Action went by so quick in the last 10 minutes of the first half as the Tamaraws gave another go on UP’s goal courtesy of Rico Andes at the 36th minute mark. The winger managed to push back Feb Baya but the latter forced him to shoot way off target. At that point, it appeared that the Tamaraws were building momentum as Andes’ effort was followed by two more shots that tested the sturdy UP defense.

The first of those was a Joshua Mulero header, coming from A. Menzi’s free kick, that lacked the required power to stretch UP goalkeeper Ace Villanueva. The second attempt turned out to be a glorious chance presented to Eric Ben Giganto, who had the best chance of the half. He was played through on goal but Villanueva timely charged him down to keep his long-standing clean sheet intact.

It looked like the first half was about to finish goalless, but the Fighting Maroons had other plans. Baya placed a cross inside the box, forcing Joyel to punch it away. Unfortunately for him, Magdato pounced on the rebound to slot the ball into the back of the net. It nearly became worse for FEU had Niño Muros finished off a solid chance set up by Magdato in the last minute of added time.

At the other side of the break, the Tamaraws gradually controlled the tempo of the game. Chances remained few but with most of them coming the way of FEU, the boys in gold were smelling blood. At the 62nd minute, Andes broke away from the UP defense before hitting a wonderful strike saved by Villanueva. It would have been void anyway as the linesman flagged for offside. It was a called that angered the FEU bench, who felt that the decision was incorrect. It would have been more controversial had UP padded their lead eight minutes later. Miyagi headed the ball from close range that was parried away by substitute goalkeeper Michael Menzi.

As time winded down, the FEU Tamaraws became more desperate in search for an equalizer. Despite the UP defense locking them down very well, the champions of Season 76 and 77 men’s football had one more chance to extend their season. Substitute John Renz Saldivar threaded a cross to Mulero. It was a promising chance to save their season but the Nigerian placed his effort wide to the right. It summed up FEU’s season as they went out when the referee blew the final whistle a few moments after.

“I thought we dictated the game in the first half. Towards the end, last 30 minutes, puso na lang, guts. Walang gustong bumitaw. They really wanted to finish strong and win against FEU,” told Anto Gonzales. His team has yet to concede since their 3-3 draw last month against UST, prompting him to underline the importance of sticking to their philosophy. “Everything starts with defense. If your defense is sturdy, you don’t allow the opponents to settle; then you can attack more freely,” he stated. It surely has helped UP who may have only scored 16 goals, but have just allowed five goals throughout 14 games.

Interestingly, four of the five goals they have conceded came against the UST Growling Tigers, their likely foe in the semifinals. Unless UST avoids defeat against La Salle, the Fighting Maroons’ strong performance on defense will have to come in handy versus the much-improved Tigers in the playoffs.

Meanwhile, the season is now officially over for the FEU Tamaraws, finishing below four teams with a total of 24 points coming from seven wins, four losses, and three draws.