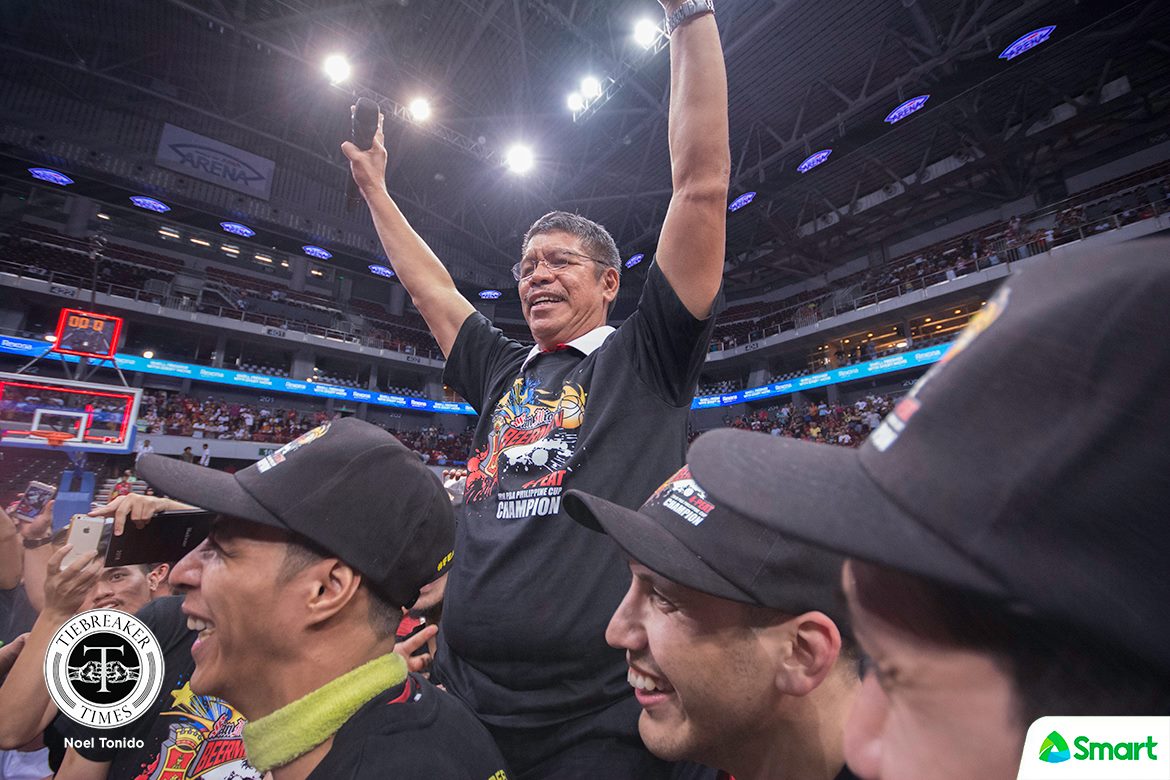 But the clincher to his sixth championship was a tough one as the San Miguel Beermen had to go through 58 minutes to eliminate the Magnolia Hotshots, 108-99. And the game was a testament to his team’s will to win for one another.

“I really don’t know what to say. I’m overwhelmed with what happened in this fifth game, dahil we thought na they will extend the series to Game Six,” the 60-year-old tactician beamed. “But the players didn’t give up eh. And when we caught up, the team realized na it is possible. And talagang nangyari eh, and I have to give credit to all the players dahil they keep on supporting each other.

“Maybe this is because of the experience we had. Sabi ko nga kanina na-develop ang character, the winning attitude, and now they have the heart of a champion, na hindi basta-basta papatalo sila.”

But Austria is deflecting all the credit to the team’s management, his staff, and the players.

“I’m happy with this fourth All-Filipino Cup na napunta sa amin. I think this is a record for the team. If I am not mistaken, 34 years ago, nakuha ito ng Crispa. I don’t know ano. But this is one for us.”

As they say, winning is addicting.

#ReadMore  Jio Jalalon owns up to costly TO down the stretch

After picking up a sixth championship under his belt, Austria remains hungry. But even with “two reinforcements” coming in, he won’t rest on his laurels, still believing that hard work beats talent any time of the day.

“But anything is possible, and we still have to work hard in the coming conferences dahil alam natin, magagaling ang mga import na darating. They can limit June Mar Fajardo, because they have an import to match up on the strength of June Mar,” he shared. “We still have Christian [Standhardinger] and our import who could support the team. And I think na we’re really confident na we can still win a championship if given a chance and the opportunity. The players talagang ano eh, hindi na pagkagutom ang nagpe-prevail eh — yung pride nila.”