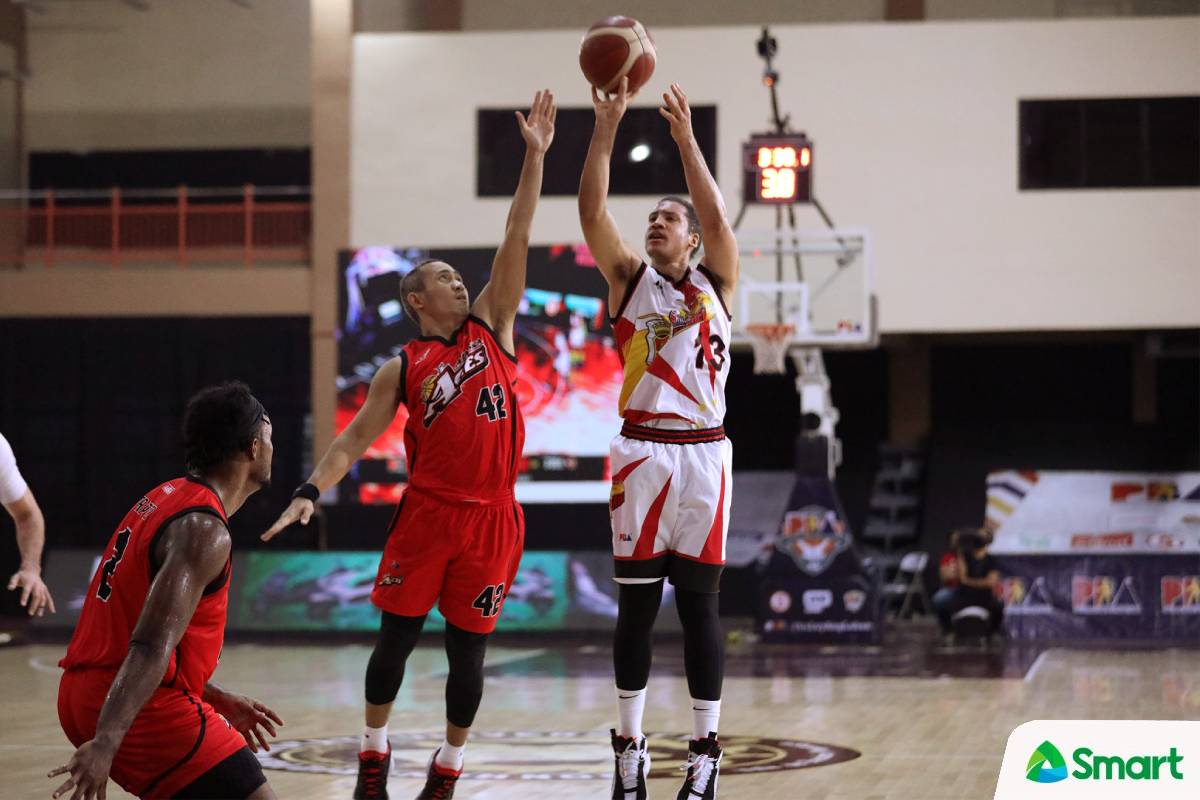 Marcio Lassiter came to save the night as San Miguel beat Alaska, 101-100, in the 2021 Honda PBA Philippine Cup, Wednesday at the DHVSU Gym in Bacolor.

The veteran sharpshooter sank the game-winning triple from the corner with 3.8 seconds left to play, and the Beermen went on to secure the no. 4 spot for the quarterfinals while booting the Aces out of contention.

Lassiter finished with 13 points on two triples, together with four rebounds and two assists as SMB finished the elimination round with a 7-4 record.

“I’ve told them na it’s better to get into the quarterfinals with momentum, by winning against Alaska,” said head coach Leo Austria. “We want to win because we lost in our last game and we don’t want that to be the habit eh.”

CJ Perez top-scored for San Miguel with 20 points, together with six rebounds and three assists, including the dime that led to Lassiter’s big trey.

Reigning six-time MVP June Mar Fajardo finished with 17 points and 10 rebounds. Chris Ross also scored 17 on an efficient 7-of-11 shooting from the field, as Mo Tautuaa added 15 markers in the victory.

The Beermen started out on fire with a quick 23-8 lead but a motivated Aces managed to chop the deficit and even went ahead by seven, 50-43, early in the third, and both squads went on to trade blows the rest of the way.

Perez went on to give SMB a 98-95 lead following a lay-up with exactly two minutes remaining in the game, only for the opposition to tie the game up behind Jeron Teng with just 1:03 on the clock.

And through his kick-out from the past, Abu Tratter knocked down a jumper from near the free throw line to put Alaska up, 100-98, with 19.7 seconds left.

But then, Lassiter happened. The play was originally intended for Fajardo, according to Austria, but the Beermen inside simply relied on their familiarity that ultimately led to the booming trifecta that dejected their foes.

The Aces did not have a timeout left to set up a plan with the remaining time to work with as Teng had already burned it out earlier. Maverick Ahanmisi then failed to hoist up a last-gasp attempt as he lost the ball.

“Medyo swerte lang kami because of our last play, so, na-design ‘yun for the big man. So it happens na somebody will be open if ever na magko-collapse sila. And that happened,” Austria recalled.

San Miguel now awaits who will end up as the no. 5 seed to be their opponents in a best-of-three series in the next round, which could either be NorthPort or the Rain or Shine Elasto Painters.

“Against Rain or Shine or NorthPort, these teams are contenders. It needs a lot of focus and preparation against these teams,” Austria said.

Tratter had 24 points and nine rebounds to lead Alaska in the heartbreaking defeat that dashed their playoff hopes goodbye.

The Aces dropped to 3-7, and will look to finish the conference strong against the Batang Pier tomorrow at 4:35 p.m.