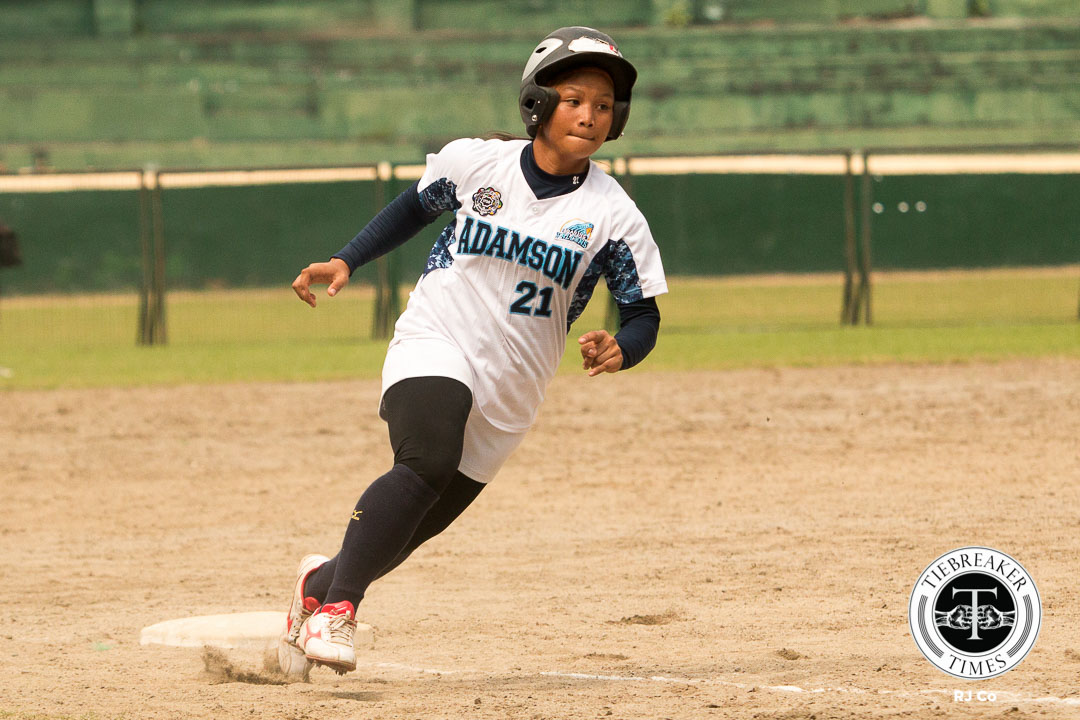 The defending five-time UAAP Champions blasted a hapless Ateneo de Manila University squad in just four innings, 13-0, to end their first round campaign unblemished while sending the Lady Eagles spiralling to the bottom of the standings.

Gelyn Lamata provided a highlight moment for the season to open the game. With two outs and the bases loaded, the Adamson third year player slammed a huge grand slam over-the-fence homerun to center left field that gave Adamson a quick 4-0 lead.

Even with two outs, the Lady Eagles could not close out the first inning as errors continued to extend the inning. After loading the bases once more, Riezel Calumbres connected with a grounder to center field to bring in two more runs while a single by Lorna Adorable punched in Adamson’s seventh run of the game for an imposing 7-0 lead to end the opening stanza of the game.

The Adamson fielding also punished the lackadaisical Ateneo offense for the entire game as well. After allowing Bea Parma reach base, due to an accidental hit by a Rilayca Basa pitch, in the first innings, no other Lady Eagle was able to reach base in the next two innings.

After a scoreless second inning, the floodgates once again opened in the third canto. With one out, Calumbres again connected with her third single of the game while a double by Adorable brought her home. Adorable was tagged out at second base to give Ateneo two outs but again they could not close out the inning.

A couple of wild pitches brought reserve Shaina Camacho home for Adamson’s ninth run of the game. Later on, with two runners on base, a catching error by Ateneo shortstop Samantha Baterina allowed another run. A two-out, 2RBI single by Lozada and an RBI single by Edna Severino closed out the rally with Adamson holding a 13-0 lead.

The only Lady Eagle who was able to connect on the Adamson defense was team captain Angela Natividad. The team captain connected on a single to center field to start the fourth inning but the next three batters were quickly ousted – including a strikeout of third batter Angel Africa.

Gelyn Lamata was the player of the game after a grand slam HR. In the game, she was 1 of 3 at bat while having 4 RBIs as well. Lead-off batter Calumbres went 100% for the game in going 3 of 3. She connected on three singles and had 2 RBIs.

After the game, confusion ensued as the Adamson Lady Falcons were quickly penciled in to play a game to open the second round on Wednesday, February 17. Head coach Ana Santiago said that normally, the top-seeded team receives a bye on opening day. Benjamen and Santiago, upon knowing this, quickly went back to work and practiced for more than an hour on the pitch.

On the other hand, the Lady Eagles had a two-hour long meeting at their clubhouse. This was their third long post-game meet in three games.

The Adamson Lady Falcons finish the first round with a 6-0 record while the Ateneo Lady Eagles are still winless in six games.