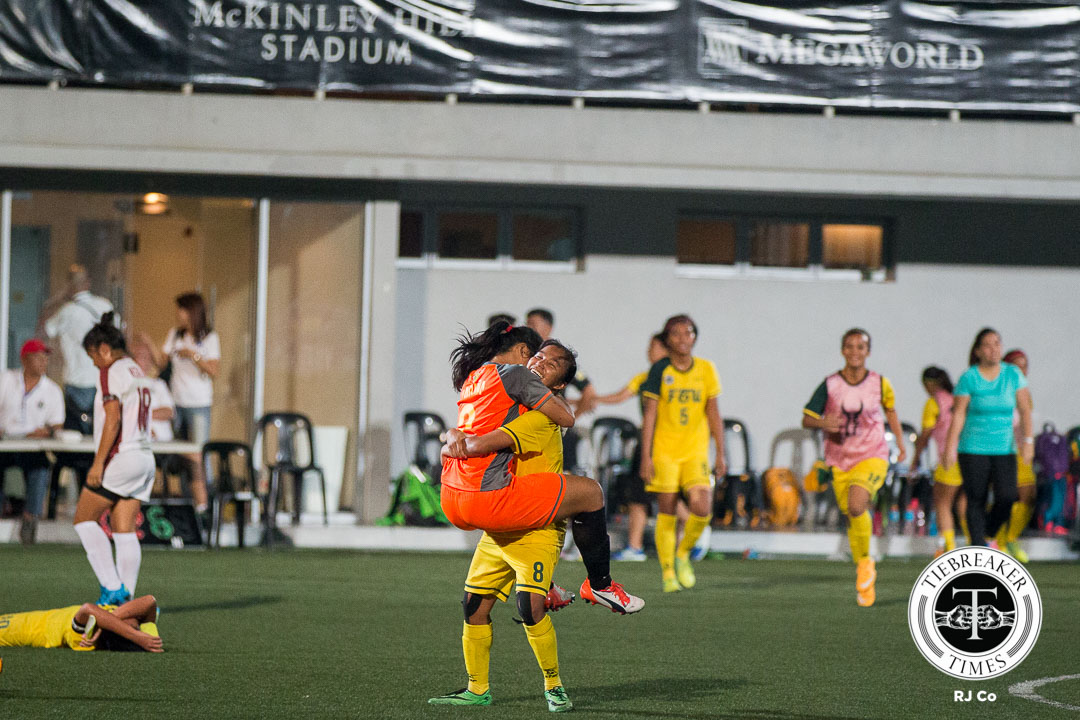 Winless after two games, the reigning champions FEU Lady Tamaraws have finally found their rhythm back in time as they went against an opponent they really like to beat.

A sensational Sharmine Siaotong strike 14 minutes into the game settled an intense encounter between FEU and the UP Lady Maroons, which ended 1-0, Sunday evening at the McKinley Hill Stadium.

This outcome meant that two trends came to an end on Sunday night. The Lady Tamaraws squashed their two-game losing skid while the Lady Maroons’ winning run stops at two. As a result, FEU goes level on points with Ateneo and UST. All three teams have three points to their tally, with FEU owning the second best goal difference among the three. UP, on the other hand, missed out on the chance of keeping step with La Salle. They now find themselves three points behind the league leaders, who remain on a roll by winning their first three games of the season.

The UAAP champions took the game early to the beaten finalists of Season 77, but not before withstanding an early siege by the Katipuneras in maroon and white. Mary Rose Obra led the revolution for UP as she got into the thick of things up front. The UP forward was able to force a modest save from Kim Pariña at the sixth minute. Obra came closer another six minutes later when her headed effort struck the top of the bar. The ball bounced back into play, falling in front of Aloha Bejic who cleared the ball away from danger.

At that point, the Lady Tamaraws had enough and decided to take their turn in breaking the deadlock. Roselle Lecera hit an audacious shot from far out that went straight to Nic Adlawan. That was FEU’s first shot on goal and they did not have to wait too long for them to bag a goal they badly wanted. Kim Cupal’s probing pass kindly fell in front of Siaotong, who was left wide open at the center of the attacking third. A renowned finisher, the veteran winger finished the chance well by placing it beyond Adlawan’s reach into the bottom corner.

The breakthrough goal prompted immediate reaction from the Maroons’ camp. It took five minutes for UP to garner a response, which came from Christille Ardiente. The midfielder whipped a shot on target, but not with a lot of power as Pariña was equal to it.

Midway in the first half, FEU upped the tempo in their hunt for a cushioning second goal. Just past the halfway point of the opening period, the goalscorer sent a magnificent ball into the box. Supposed to meet Sudaria, the ball ended up with Cupal whose mildly-struck shot just a few yards from goal was cleared by Molly Manalansan. Sudaria drilled in a curling shot not long after and it nearly found its way into the back of the net. Luckily for Adlawan, the wind wasn’t strong enough to alter its direction entirely.

As the half hour mark passed, UP regained momentum and kept possession well enough to pile pressure on the Lady Tamaraws. Their efforts won them occasional set pieces, but none of those were instrumental in unlocking the tight FEU defense. Their best chance in the first half came from open play, courtesy of an arching shot made by Ardiente just outside the box four minutes before the break. FEU saw out the half with a slender one-goal lead to take into the second half.

After the interval, UP dictated the pace. The Lady Maroons urgently sought for an equalizer that may also turn the game on its head. Their first crack on it came from Cristina de los Reyes. The captain turned and shot the ball well within her range from 20 yards, but couldn’t muster enough accuracy and power to send the ball into the onion bag.

The Lady Tamaraws nearly made her pay five minutes later. The ladies in gold surged counter attack and produced attempts from Sudaria and Siaotong, both of which were blocked by the UP back row. The Lady Maroons’ defense, nonetheless, had no answer to Brigette Kadil’s attempt. Fortunately for them, the ball went straight onto the crossbar. It proved to be FEU’s last clear chance in front of goal as the Lady Maroons made it a halfcourt game for the next 37 minutes or so.

Resuming UP’s campaign to salvage at least a draw, Obra threaded a nifty pass towards De los Reyes at the hour mark. The UP’s captain made her run into a dangerous area but she couldn’t get a touch to it as her counterpart with the armband, Dolino, booted the ball out. Another chance to tie the score was presented to De los Reyes, who was swarmed by plenty of FEU players inside the box. She was able to shoot the ball but not without hitting an FEU defender, and in the process, missing the chance altogether.

Still, the Lady Maroons kept threatening in front of goal and were almost rewarded for their hard work 14 minutes before time. Ardiente drilled in a corner towards Manalansan who was just inside the six-yard box. However, the senior’s header was simply off target. The level of desperation UP had was epitomized by Marie Navea-Huff’s long-range shot that went harmlessly wide.

Manalansan, who was deployed on defense in the first half, was active on the other end as the game approached its final 10 minutes. Together with BG Sta. Clara, she was a targeted recipient of Obra’s cross from the left flank. FEU’s defense stood alert of it in order to prevent a potential equalizer in the dying moments of the game.

As time was running out, the Lady Maroons continued to press for what they may think as a deserved leveller. De los Reyes got her team a set piece opportunity five minutes before time, although it came with a costly price. The captain took a bad fall and injured herself in the process. The sacrifice nearly paid off but Sta. Clara just guided the Manalansan-delivered free kick off the mark. The aforementioned duo connected once more three minutes before time but Manalansan was timely interrupted by the FEU backline, who stood firm long enough to make sure the Lady Tamaraws finished the game with the win.

As far as UP tactician Coach Anto Gonzales is concerned, the girls from Diliman played quite well despite losing the match. Undone by what he described as a fantastic FEU attacking sequence early in the game, the Lady Maroons showed character to get themselves back in it, albeit without rewards. “With their performance today, they have to be happy comparing it to their performance against Ateneo. Definitely a lot better today. Unfortunately we weren’t able to create clear cut scoring opportunities,” he assessed.

Moving forward, the Lady Maroons are eager to get back to winning ways by putting a blemish on the Lady Archers’ immaculate record. The opposite happened last year when DLSU arrested UP’s three-game winning start, so the girls from Diliman are looking to return the favor this time around. They are set to meet each other this coming Saturday, 4PM at the McKinley Hill Stadium.

After that mouthwatering clash between first and second, a battle between FEU and Ateneo will take place also in the same venue at 7PM. The Lady Tamaraws are hoping to build on last night’s result with another win. It will not come easy, however, as they prepare to face an Ateneo team keen to take their place in the final. The women’s double-header will effectively conclude the first round action of UAAP football in both men’s and women’s division. 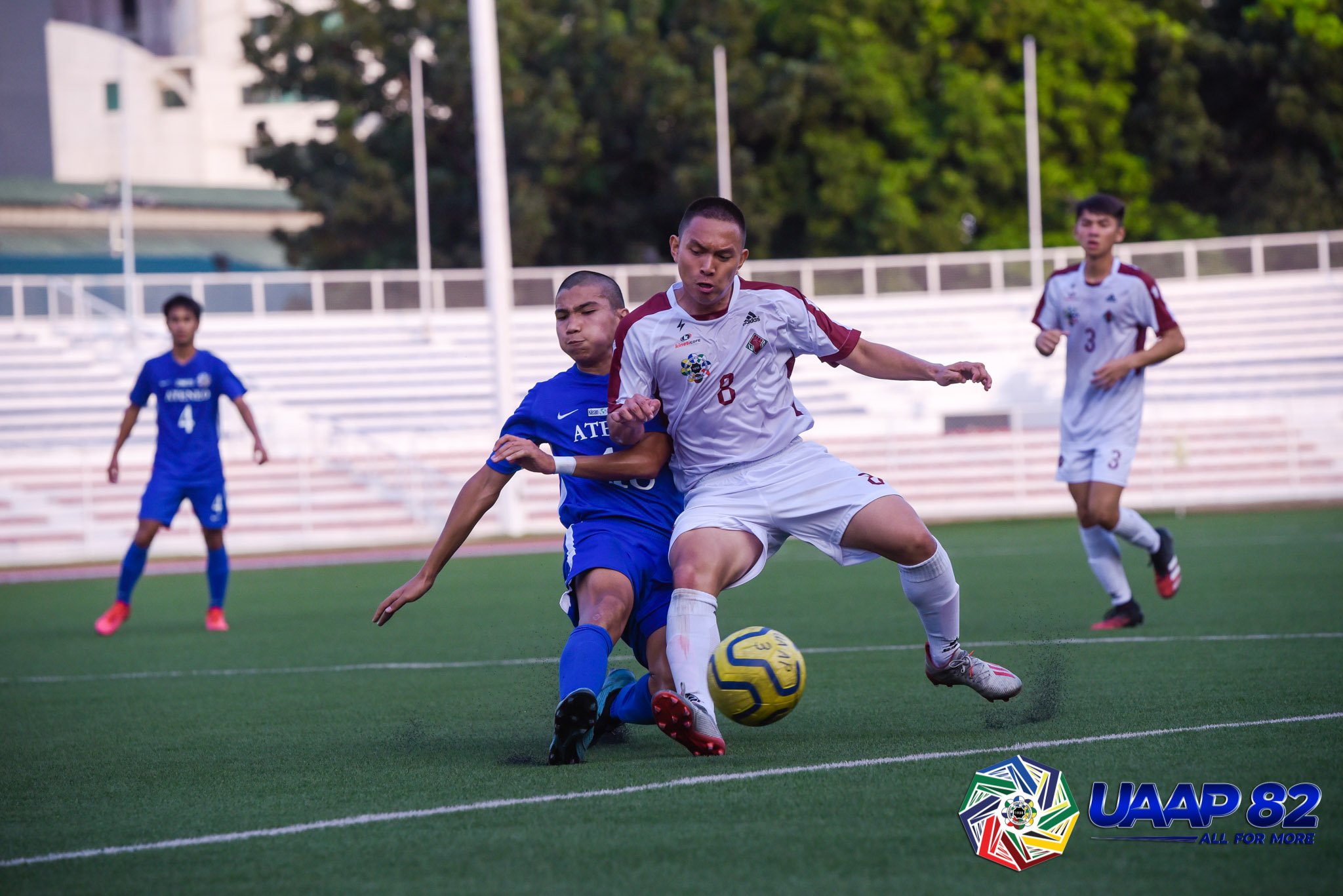