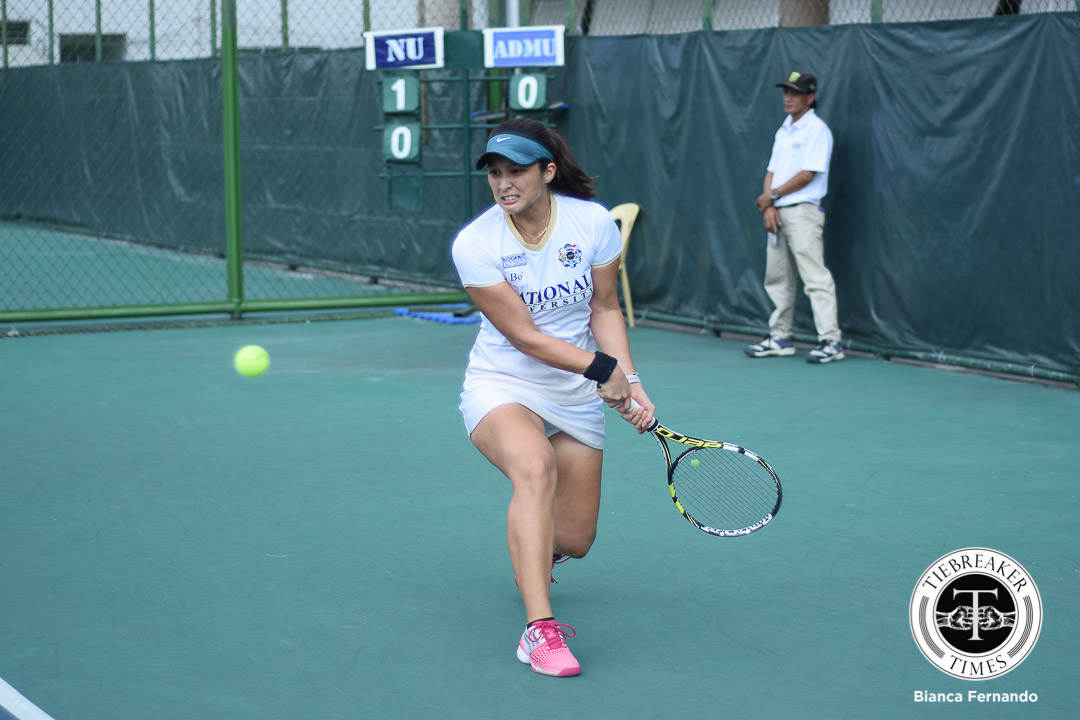 Reigning champions National University Lady Bulldogs stamped their class against winless University of the Philippines Lady Maroons to move one tie away from elimination sweep, 4-1, Sunday at the Rizal Memorial Tennis Center.

UP’s CJ Valdez took the first singles match against Khrizzan Dumlao in straight sets to put the Lady Maroons on the score board. The UP junior dominated her opponent throughout the entire match, allowing Dumlao just a single service hold. Valdez took the match, 6-1 6-0.

From there, the Lady Bulldogs took control of the tie, starting with the other two singles matches. Former Most Valuable Player Christine Patrimonio registered a similar result against UP veteran Bancy Peña in the second singles match. Peña held serve at the start of the match, but Patrimonio romped to the win.

In the third singles match, reigning MVP Clarice Patrimonio carved out a double-bagel win against Monica Cortez. The younger Patrimonio breezed past the Maroons sophomore using her all-around game. Cortez took some points, but that was all she could manage as she failed to stop NU’s onslaught.

NU’s Hannah Espinosa and Junnalyn Polito sealed the win for their team in the first doubles match. The Lady Bulldogs conceded a game against Dawn Uy and Denise Jimenez in the first set, but managed to consolidate their breaks to clinch the frame. It was a similar story in the following set and Espinosa and Polito closed out the match at 6-2.

It was a tighter battle in the other doubles match, but Crizza Paulino and Goldie Nagret pulled through against Monika Bañez and Moira Velicaria. The NU pair took advantage of the solitary break of serve in either set to complete the rout for the reigning queens.

The undefeated NU Lady Bulldogs will go for an elimination round sweep as they face the Ateneo de Manila University Lady Blue Netters on Wednesday. If NU accomplish the sweep, they will get the twice-to-beat advantage in the Finals against the University of Santo Tomas Lady Tiger Tennisters. Meanwhile, on the same day, the UP Lady Maroons take on the De La Salle University Lady Green Netters as they attempt to close their season with a win.