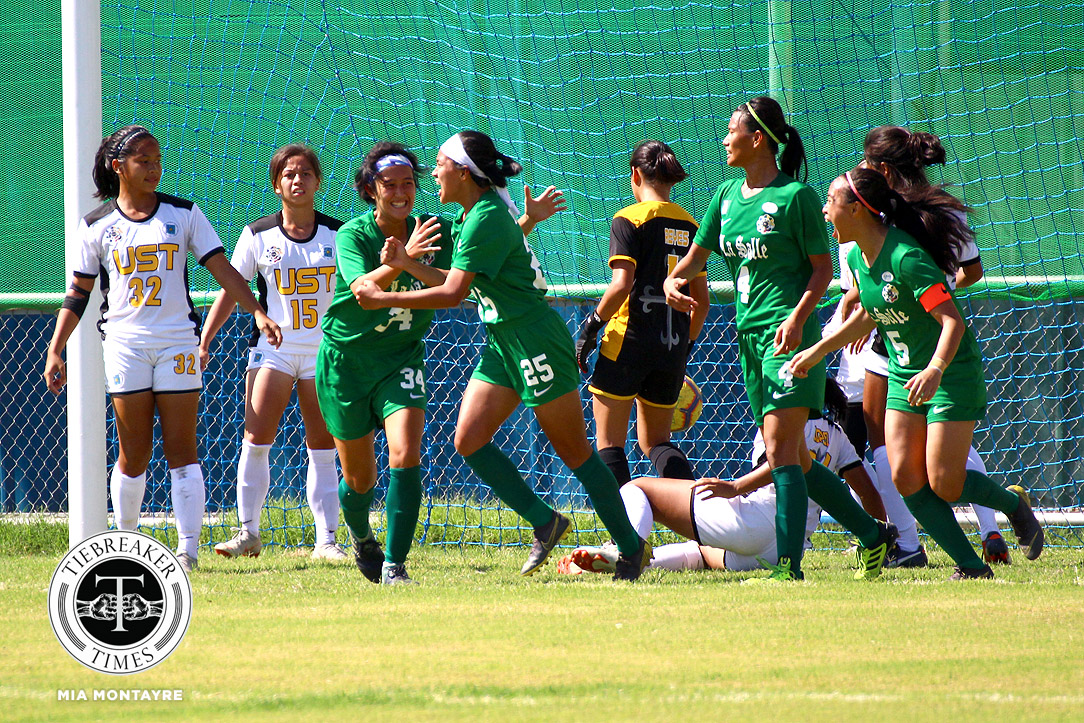 “If in the first game, missed chances, this one missed chances on the goal talaga,” lamented La Salle coach Hans-Peter Smit. “Both our central defenders were off today. We gave those two goals of UST… Nevertheless, one point is better than zero and we’re still doing well as long as we don’t lose.”

The Lady Booters had the best chances of the first half but failed to find the back of the net. UST star striker Mae Cadag was through on goal after a La Salle error, only for Lady Archers goalie Tashka Lacson to perform a fantastic stop.

It was a fortunate break for La Salle and lady luck smiled on the Taft school once again before the break when Cadag unleashed a shot that hit the crossbar.

Against the run of play, though, it was La Salle that drew first blood six minutes after the restart. The Taft school looked reinvigorated after the break and captain Kyra Dimaandal handed the Lady Archers the lead from close range courtesy of an Irish Navaja cross.

Dimaandal’s goal opened the floodgates and provoked the Lady Booters to put on their shooting boots and they overturned the deficit with two goals in 11 minutes.

Mary Joy Indac penetrated the left flank to score past Lacson at the 60th minute and captain Hazel Lustan capitalized on a Lady Archers defensive miscue to gain the lead at the 71st minute.

Lustan’s goal should have ensured that the tide had turned in favor of the Lady Booters but the defending champions had one more goal in them in the fixtute. Rookie Shai del Campo converted her batchmate Maye Mendaño’s corner at the 73rd minute for La Salle’s equalizer.

The two squads then had chances to get the winning goal right at the death but Lacson performed fine stops to deny the Lady Booters while the UST crossbar deflected attempts from Navaja and Mendaño.

Both schools shall next play on March 16, 2019, at Circulo Verde. La Salle (4 points) plays University of the Philippines at 1:00 PM while UST (4 points) competes against Ateneo de Manila University afterward at 3:00 PM.