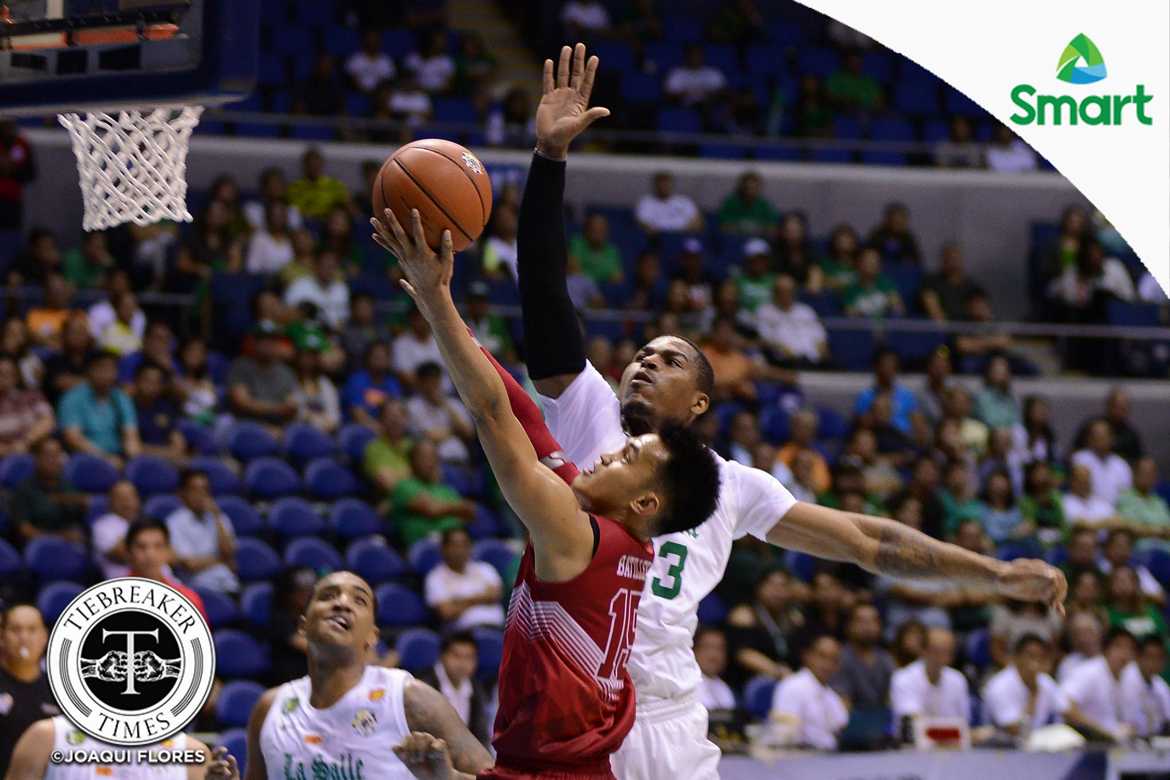 There was no ejection nor controversy this time as La Salle was clearly above the competition.

The De La Salle University Green Archers turned the game into a virtual workout, routing the University of the East Red Warriors 95-66 for their 12th straight win, Wednesday afternoon at the Smart-Araneta Coliseum in Quezon City.

The loss sends the Red Warriors to the brink of elimination as they can only get a maximum of five wins, the same number of wins as fourth-running Adamson Soaring Falcons.

Again, the Green Archers dominated their opponents across the board highlighted by a huge rebounding discrepancy. The imposing La Salle frontline had 71 rebounds in the game compared to just 34 for UE. Ben Mbala had 20 rebounds while Abu Tratter and Jason Perkins grabbed 13 and 12 rebounds respectively. This led to a huge 30 to 6 advantage in the second-chance points department.

Ben Mbala notched his 12th straight double-double with 26 points on 7-of-13 shooting from the field, 12-of-14 from the foul stripe. Jeron Teng added 20 markers while fellow senior Thomas Torres had 11 points.

“The players are maturing also, hindi ‘to puro star player ortirador, nagiging well-rounded na mga to, some of them na-accept na yung roles. It’s not all about scoring. They’re doing the little things,” Ayo added.

Unlike their first encounter which ended with a final tally of 84-78, the second round match-up did not have any semblance of it as the Green Archers quickly erected a 14-4 lead to start the game.

After a low-scoring second frame, the Green-and-White machine turned it up once more in the third frame. Behind Mbala and Jeron Teng combined for 22 points, outscoring the entire Red Warriors in the frame to gain a 70-48 lead entering the final quarter.

“We started strong. The problem is, the second group wasn’t able to sustain it,” he lamented. “Isa pa yung aspect na kailangan namin, we have to be consistent.”

The Red Warriors could only drop the lead to as low as 15 points, 77-62, in the final frame before La Salle’s bench mob finished off the job, extending the Green Archers lead to a game-high 29 points.

La Salle shot 38 percent from the field compared to 36 percent for UE. Moreover, the victors had 40 free throw attempts in the game compared to just 15 for UE who committed 33 fouls in the game.

Rookie Alvin Pasaol was the only UE student-athlete in double-figures with 17 points on 33 percent shooting.

The DLSU Green Archers (12-0) play their penultimate game of the elimination round as they face the Ateneo Blue Eagles (6-4) on Saturday, November 5. On the same day, the UE Red Warriors (2-9) face the NU Bulldogs on the same day with a special start time of 12:00nn. The venue is set to be at the Smart-Araneta Coliseum.