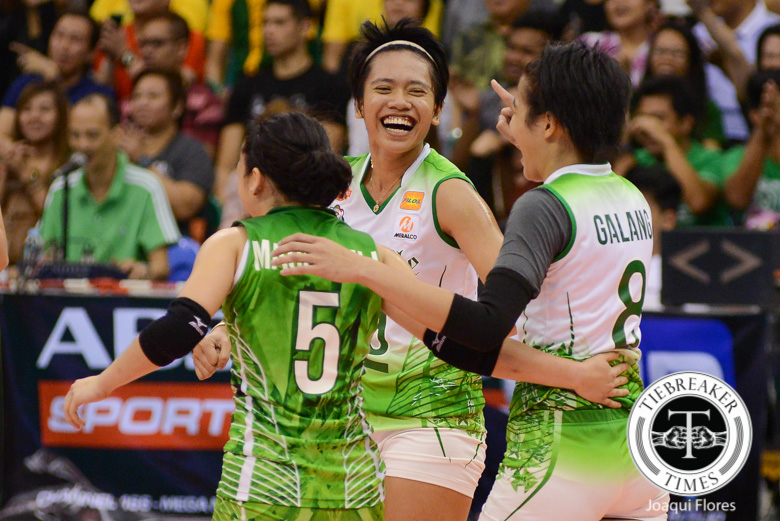 Earlier this week, the De La Salle Lady Spikers were able to beat EST Cola in a tune up game that went five sets, 20-25, 25-17, 19-25, 25-22, 15-11 at the Enrique Razon Sports Complex. And with that win, EST Cola head coach Chamnan Dokmai took notice of the talents and thought of inviting La Salle’s veteran setter Kim Fajardo to train in Thailand.

“I think the setter of La Salle [can train in Thailand],” Dokmai told reporters. “The setter can be invited to play in Thailand. She is very smart.”

Dokmai later on added that Fajardo’s play can still get better if she ever gets the chance to train in Thailand. With Thailand being one of the best volleyball programs in Southeast Asia, it will surely be an opportunity of a lifetime for Fajardo.

“If the setter can play in Thailand and train in Thailand, she can learn how to play in a higher level,” Dokmai added. “If she is [surrounded] with good players, then she can [definitely] improve.”

Also, the timing couldn’t be better as Fajardo can once again display her setting prowess as La Salle is set to face the Ateneo Lady Eagles this coming Sunday at the Mall of Asia Arena. Dokmai will surely set his sights on that blockbuster duel.

“I think La Salle will win because [Ateneo is] thin [on its rotations] because only seven players can play and they also have some injured players,” Dokmai said when asked about his thoughts on the upcoming La Salle-Ateneo bout. “Their [Ateneo] liberos have [poor] reception [and] La Salle has a complete team.”

With volleyball on the rise here in the country, it is only a matter of time before our local players get the break they needed. Surely, this isn’t the last time that a foreign country would take notice of our very own players.