Rumors have swirled over the past few months on where Jho Maraguinot will settle in.

Returning to Ateneo was already out of the question as early as last year. So it came down to the teams in the Premier Volleyball League.

Some wanted her to join her fellow Lady Eagles in Choco Mucho. Then there’s a reported offer from new team UAC where she will become the focal point of the team.

Ultimately, the 25-year-old native of Alitagtag, Batangas chose to sign with Perlas.

For her, what made Perlas’ offer stand out among the rest is that they promised to be patient with her as she recovers from a nagging right knee injury — an injury that has bugged her for the last three years. Yes, the same injury that forced her to be sidelined during the majority of her stint with Sta. Lucia back in 2019.

“Well, mayroon namang ibang teams but I was hesitant because of my injuries. I was okay naman with training,” she told The Game.

“But then, when Perlas talked to me, to me, they gave me an opportunity to play at my own pace. Parang I told them about my injuries and they were willing to help with the rehab and conditioning.”

Also making Perlas’ pitch unique was that the head of the recruiting team was fellow Atenean Charo Soriano.

The 5-foot-7 spiker shared that she is healthy enough to train.

But it’s been a full year since she has been on the taraflex. Maraguinot bared that it’s the mind that’s keeping her from being one-hundred percent healthy.

Excited though is Maraguinot for the upcoming PVL season as she gets to take on the country’s best and finest on a daily basis come the last week of May.

Maraguinot though is most excited to step on the court against her friends in Choco Mucho.

Well, the banters between her and her former teammates like Bea De Leon, Maddie Madayag, Kat Tolentino, Ponggay Gaston, and Deanna Wong have already began.

“It’s exciting for me. Actually, they messaged me. Lahat sila, sinasabi na, ‘We are going to beat you!‘” she quipped. 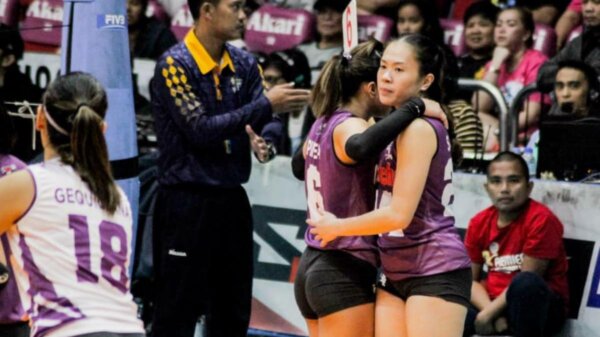