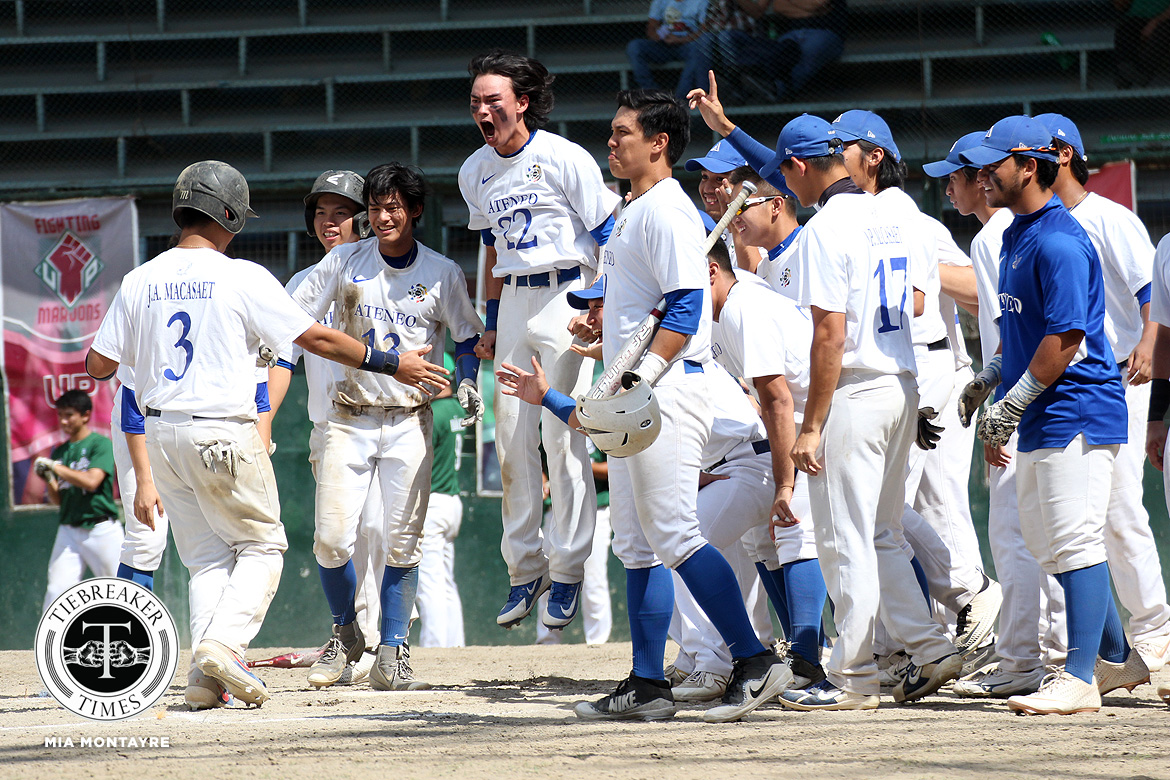 With their backs against the wall, the Ateneo de Manila University Blue Eagles produced their best performance of the season.

Javi Macasaet and Gino Tantuico caught fire at the bat, powering the Blue Eagles to a 7-3 triumph over the De La Salle University Green Batters, Tuesday afternoon at the Rizal Memorial Baseball Stadium.

The series will now head to a winner-take-all bout which will take place on Friday, April 5.

Coming off a 7-9 Game One loss last Friday that saw Ateneo score five runs in the ninth inning, Blue Eagles head coach Bocc Bernardo was already confident that his boys had already found a solution to the La Salle riddle.

“Sabi ko nga, yung ninth-inning barrage nung Game One gave us the confidence that we can beat La Salle offensively and defensively. Now, it showed. We did not take any opportunity for granted. Everything went as played,” said Bernardo, a former Blue Eagle himself.

“They are the heart of our offense. Javi was unstoppable. Unfortunately, he had cramps and was a little liability on defense but his offense more than made up for it,” shared Bernardo. “It’s big for us that our three and four batters came through on offense. They came through today.”

Tantuico started the game with a two-run double to put Ateneo on the board.

Though the Green Batters were able to knot the game during the third frame after back-to-back hits by Iggy Escano and Kiko Gesmundo, the Ateneo duo were able to bring the Blue Eagles back up.

On the other end, Miggy Angeles was an ironman on the mound, pitching all nine innings for Ateneo. Though he allowed nine hits, only three runs were punched in by the Green Batters with 11 of their batters being stranded.

“He was sensational today. He was hungry today even if he was struggling with control during the last few games. During the three day rest, we told him he was going to start and he wanted it,” Bernardo said about the lanky pitcher.

For good measure, Tantuico knocked off his second HR of the series, a two-run home run in the seventh inning.

This is La Salle’s first loss since February 24, snapping their six-game winning streak.

Lu Minana could not replicate his magical Game One outing in this game, giving up eight hits in five innings — four of which were earned.