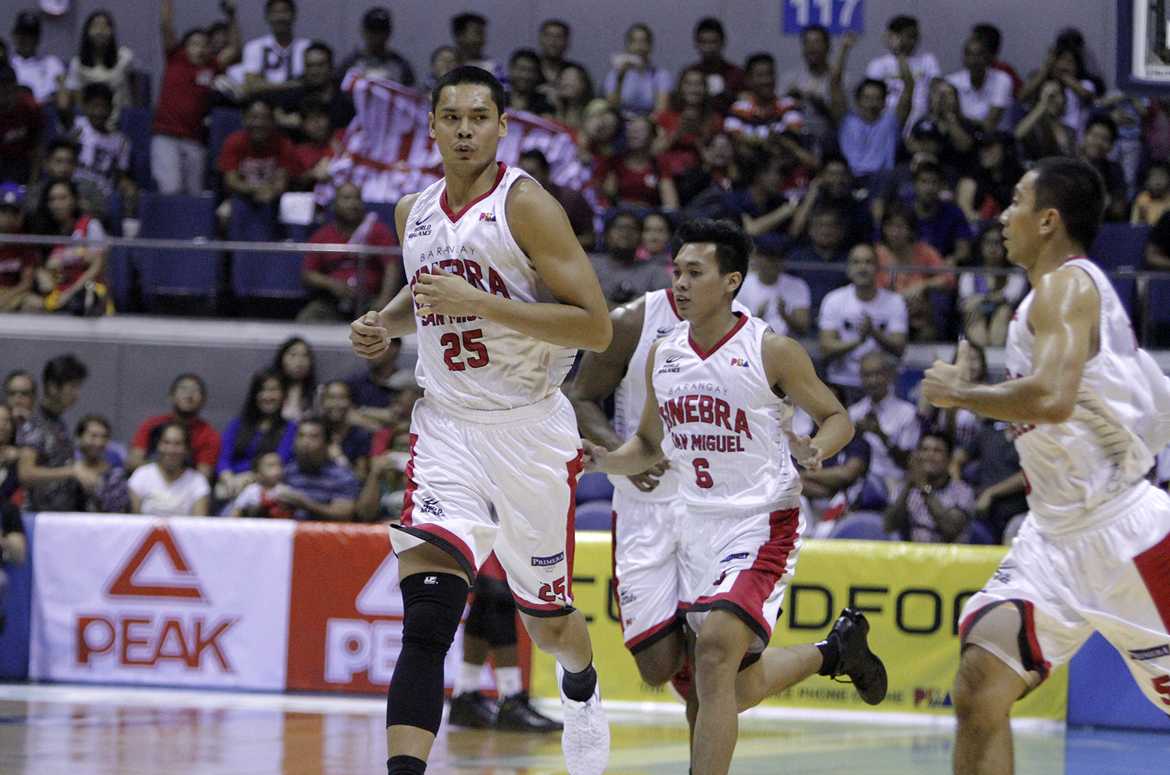 In another chapter of the tooth-and-nail series of two sister teams, Japeth Aguilar drained the game-winner to lift Barangay Ginebra San Miguel in a 97-96 win — and a 2-1 semis series lead — against the San Miguel Beermen at the Smart-Araneta Coliseum on Friday night.

The game of runs featured the two heavyweights grind it out in a wide array of offensive spurts for the first three quarters. In the final frame, the squads traded punches that yielded an emphatic exchange in front of 14,253 Big Dome viewers.

The Beermen led by a point with 38 seconds remaining after Arwind Santos converted a key jumper. Afterwards, SMB tried to put the seal after a stop, but botched their attempt on a fast break. On the other side of the floor, Justin Brownlee and Scottie Thompson missed their respective chances, but the ball went in the hands of LA Tenorio.

Opting not to call for a timeout, Tenorio swung the ball to Sol Mercado, who located a wide open Japeth Aguilar from the left short corner. Swish.

“He was so calm when he shot that. No rushing, no nothing,” said a relieved coach Tim Cone, who admitted the game had been something special considering the intensity both teams displayed. “That was fun. It was a hard, well-fought game.”

“I’m smiling without a doubt, because it was something. I would really be crushed if I were on the other side.”

However, Cone conceded that prior to the game-winning shot, he had to credit his crew for hanging in there despite establishing a 13-point lead in the first quarter. Ginebra were the first team to strike in the opening quarter, but saw their lead vanish, and they even trailed because of San Miguel’s game-long sniping.

“There’s a lot of things that happened and that’s just us hanging around the whole game,” Cone furthered. “Just like Sol [Mercado] getting back in the floor to make Arwind [Santos] miss, and rebounds of Scottie that gave us extra chances. That’s what our team’s all about.”

Aside from the winner, Aguilar finished the night with 22 points, eight rebounds, and four blocks. Scottie Thompson had an all-around game once again with a triple-double of 12 points, 11 rebounds, and 10 assists, with no turnovers. Import Justin Brownlee led all scorers with 25 markers.

Elijah Millsap had 24 points for the Beermen, with 12 rebounds, and four assists. Marcio Lassiter and Arwind Santos had 15 points apiece, while June Mar Fajardo had a silent 11-point, 12-rebound effort as he was plagued with foul problems.

Ginebra look to close it out and enter the Finals of the Governor’s Cup on Game 4, which will be played on Sunday at the Big Dome.