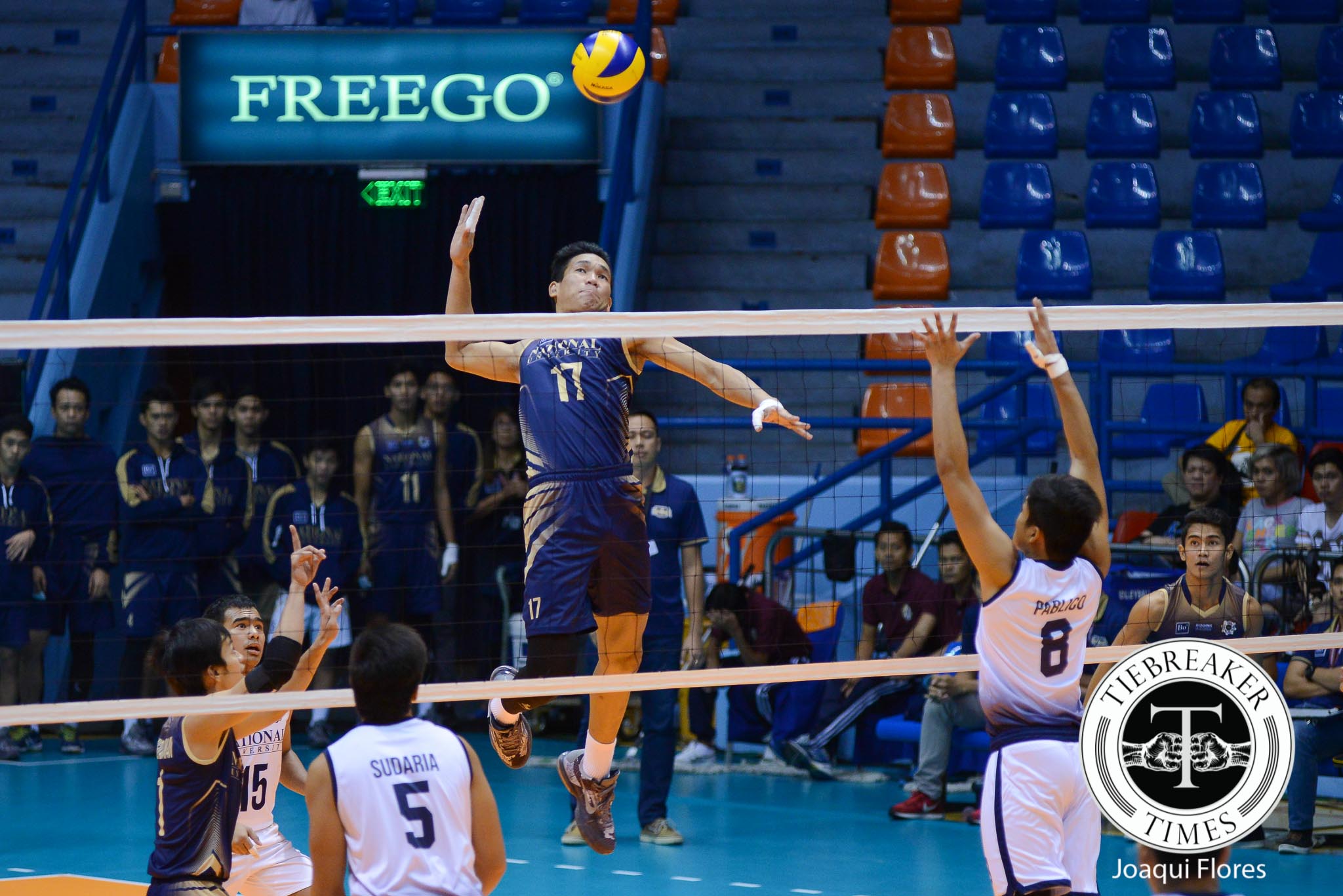 The match featured two teams that boast numerous power spikers. Madz Gampong led the way for NU with 19 points, 17 coming from attacks. He was helped by James Natividad, Bryan Bagunas, Kim Malabunga, and Francis Saura, who scored 14, 14, 13, and 11 points respectively.

Adamson, on the other hand, were topscored by Jerome Sarmiento with 20 points, 17 off of attacks and 3 coming from service aces. Team captain Michael Sudaria notched 14 points, and Dave Pletado had 12 to round out the Adamsonians who scored in double-digits.

Neither team was able to take a lead bigger than 2 points throughout most of the set. Tied at 18 points, Adamson went on a 4-1 run to take the biggest lead of the set at 22-19. The Bulldogs countered hard and fast, getting to set point after scoring 5 quick points, 2 of which came from Natividad aces. Nico Ramirez attempted to extend the lead, scoring on a swipe, but Saura scored on a quick attack to take a 1-0 set lead.

Adamson opened the second set with two early points. NU battled back as Gampong and Malabunga came alive to tie the set at 4. From there both teams traded points until NU went on a 4-0 run, with 2 of the points coming from Natividad. The Bulldogs were able to extend their lead to 5, 18-13, but a four-point run led by Sarmiento kept the match close. Sarmiento continued his hot streak, helping Adamson take the lead, 21-20, but NU took five out of the next seven points of the set to run away with a 2-0 set lead.

READ  Tall Tales: Hasheem Thabeet and his hopes of coming back to the NBA

The Falcons, unwilling to accept defeat, jumped to an 11-6 lead in the 3rd set in the hopes of prolonging the match. NU, however, took matters into their own hands, scoring seven straight points for a 13-11 lead. Adamson kept pace with NU, but the Falcons’ errors gave the Bulldogs set point, 24-22. The Adamsonians kept their composure, scoring two straight points to tie the set at 24. Natividad scored once more for NU, but Adamson notched three straight points to take their only set win of the match.

Sarmiento opened the fourth set with an ace, but three straight NU points gave the Bulldogs the lead that they wouldn’t relinquish. Adamson threatened to tie the set multiple times, but NU’s composure shone as they eventually took the match.