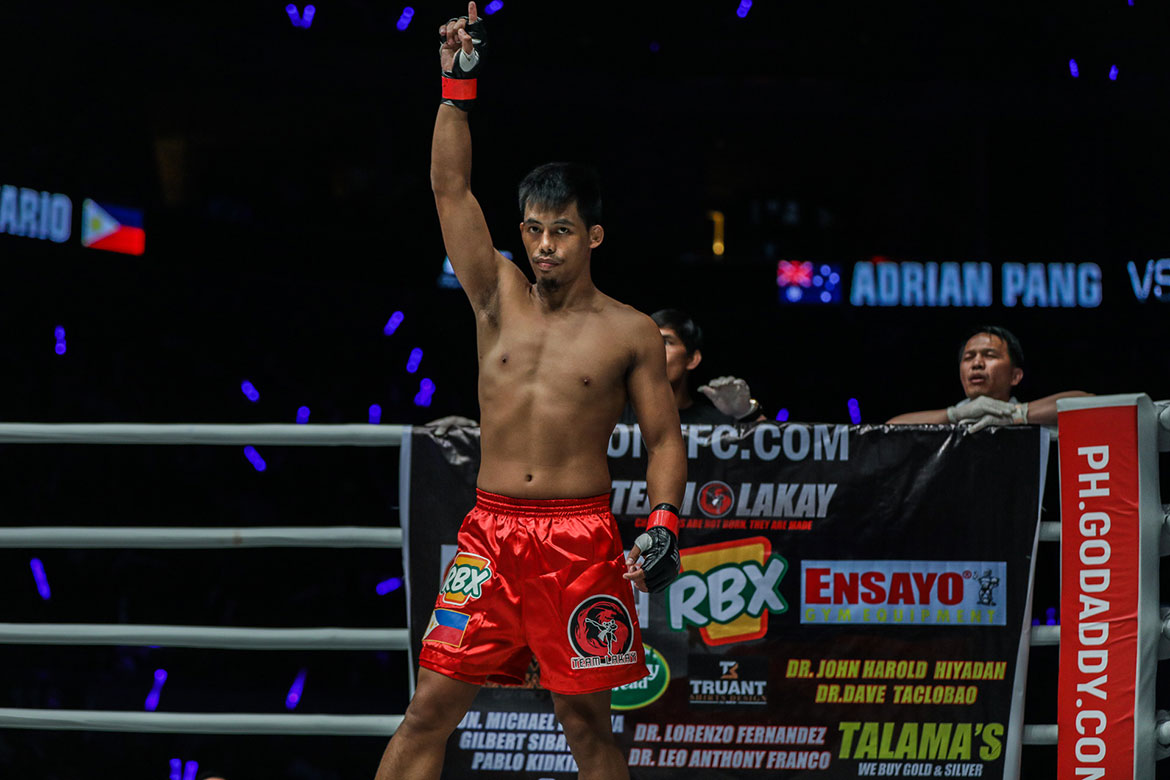 Former ONE Featherweight World Champion Honorio “The Rock” Banario has experienced a career renaissance as of late, putting together a five-bout winning streak after losing five in a row.

After a turbulent period that saw him fall to new depths in his professional stint as a mixed martial artist, Banario pondered retiring from the sport altogether.

However, the 28-year-old Team Lakay veteran was encouraged by friends and family to continue forging ahead.

Chalking up to a simple martial arts philosophy of treating setbacks as setup for future triumphs, Banario made a critical change by moving up to lightweight in 2016.

As a lightweight combatant, Banario has looked noticeably stronger and more confident every time he steps onto the ONE Championship stage.

“As a martial artist, it is very important to recreate myself,” he said. “Everyone was doubting me. It was very hard to keep away from the negativity.

“But true champions take the negatives and turn them into positives.

“True champions draw strength from defeat. It’s not how hard you fall, but the manner in which you rise again,” Banario added.

Banario affirmed that the modifications he has made in his training are beginning to show terrific results.

“I have made it a point to do what I can to improve my grappling,” he stated.

“Everyone knows my weakness has always been grappling, but that’s what we do, we focus on plugging those holes and erasing our weaknesses.”

Known by the moniker “The Rock” due to his toughness, Banario feels that he is moving towards becoming more of a complete martial artist.

“I have been travelling all over the Philippines, visiting various gyms, especially in Manila, working on my wrestling and grappling. Compared to maybe three years ago, my grappling right now is much smoother than before. I am a more complete MMA fighter,” he explained.

In his most recent outing, Banario scored a hard-fought split decision victory over Australian hard-hitter Adrian “The Hunter” Pang in front of his countrymen at the 20,000-capacity SM Mall of Asia Arena in Manila, Philippines.

Banario owes much of his current success to Team Lakay, which is now recognized as the top mixed martial arts camp in Asia today.

“I am very grateful to have a team like Team Lakay.

“I am happy to be part of it in making history. The good thing about our team is that we are like brothers. We respect each other and we help each other in so many ways. We work as a team and as a family. We are one,” he expressed.

Banario is looking to have a few more proud moments, beginning on September 8 in Shanghai, China, as he faces Singaporean standout Amir Khan in the co-main event of ONE: Beyond the Horizon.

With both competitors showcasing predominantly stand-up skills and preferring to keep the bout on the feet, Banario believes that the contest will play out in entertaining fashion.

“I see the fight as an exciting fight because we are both strikers,” he gauged.

“I also see it that I am winning this fight.”

A victory over a top contender like Pang would undoubtedly elevate Banario closer to a lightweight world title opportunity, but he is not putting that pressure on himself, as he vows to do his best to clinch another big win.

In this article:Honorio Banario, ONE: Beyond the Horizon, Team Lakay