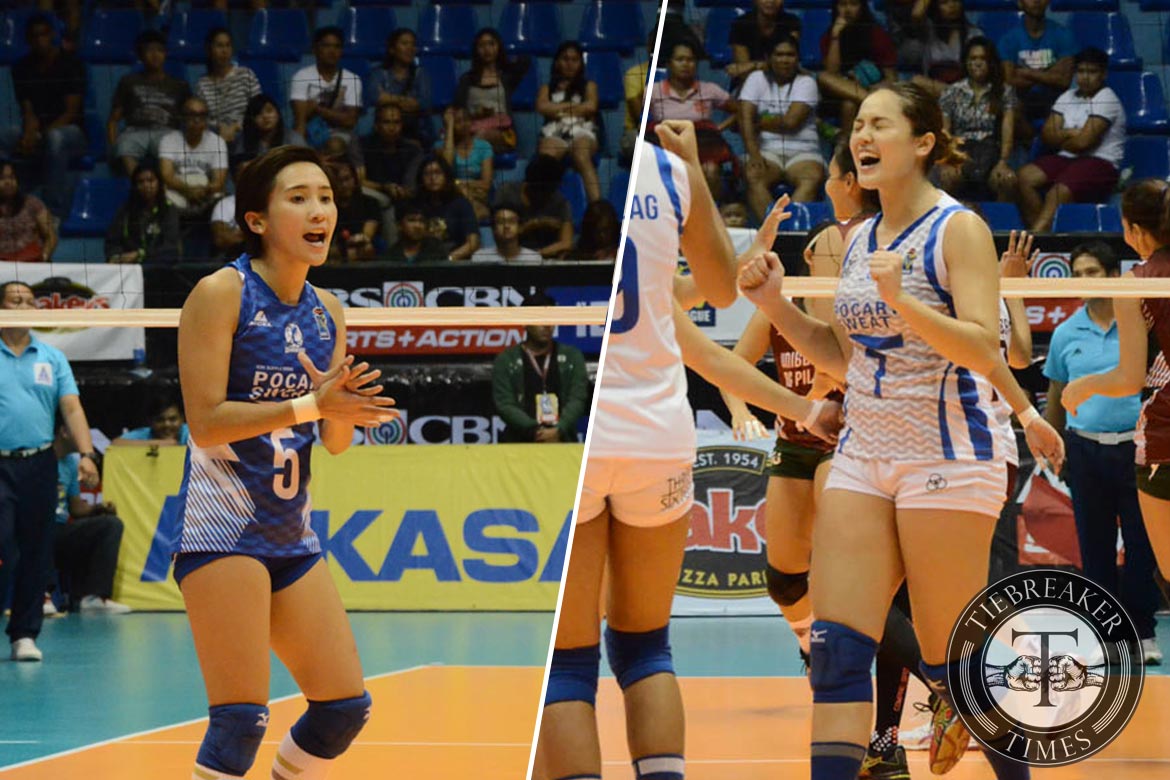 Michele Gumabao and Melissa Gohing have been inseparable for almost the entirety of their young volleyball careers.

The former De La Salle University Lady Spikers helped lead their school to three UAAP championships during their collegiate careers. After going their separate ways in 2013, the two reunited a year later, playing for the AirAsia Flying Spikers/Generika Lifesavers in the PSL, and later on with the Philips Gold Lady Slammers.

Early this year though, the parent company of the Lady Slammers decided to move to the Shakey’s V-League to the surprise of the volleyball community.

Gumabao admitted that she had mixed emotions when she first heard about the move. “I was shocked because I’ve never played in the V-League, excited because I’ve never seen the teams in the V-league, and happy na rin because we got to bring the name of Pocari,” the UAAP Season 75 Finals MVP shared.

On the other hand, Gohing, being the fighter that she is, took the move as a new challenge for her. “Any. Me kasi I just want to play with my teammates,” she admitted. “Wala naman akong [preference] if Shakey’s or PSL as long as dun ako sa team.”

The team’s manager, Eric Ty, had a tough time building this team during the off-season, which resulted in them lacking depth at the middle position. “Medyo nakulangan kami ng ibang players. Sa middle especially but we have players who can balance naman and fill-up what we lack,” Gohing said. “The team itself is okay since may chemistry na kami at magaling din yung adjustment nung mga bagong players.”

After months of preparation, the Lady Slammers finally made their SVL debut last Saturday. Pocari Sweat cruised past a young UP Lady Maroons squad for the first two sets of the game. However, the Lady Maroons gave the Lady Warriors a fight during the third frame. Fortunately for Pocaari Sweat, their experience led them to a 25-22 third set win to seal the match.

READ  Pressure is on for Philippines to create program for Kai Sotto, says Tab Baldwin

“Siguro the challenge is jelling inside the court and adjusting to our new opponents since ‘di namin nakalaban sa PSL,” Gumabao shared after the win. “We’re used to it naman. Every year we change our name, change our roster. We just have to be open-minded at all times. It’s easy to overcome anything as long as we’re a team.”

Amidst all the changes the two have experienced with their team, they continue to stay loyal to Pocari Sweat’s blue and white even if there is a Green and White reunion brewing on the other side.

Both admitted that it would have been fun to join their former team but the bond that they have made with their Pocari Sweat family would be harder to leave behind. “I want to play with them but I committed myself with this team. I know magiging masaya sila dun sa reunion,” Gohing said.

Gumabao then shared that she did not feel a sense of longing to play with her former collegiate teammates. “Not really, because I love my current teammates. Philips Gold, Pocari Sweat, we are the same team. We’re a solid team on and off the court. I love my La Salle teammates but iba yung relationship ko with my team now,” she added.

“Mel and I enjoy it so much that we didn’t think twice in transferring to the V-League. Of course I miss them. I would want to play with them again, but to leave our team, leave our management, and leave our coaching staff would be hard for me. We’ve established a relationship na solid talaga.”

Both Gohing and Gumabao still wished their former schoolmates the best of luck in their upcoming PSL campaign in saying, “Good luck sa kanila. For sure they will have fun kasi iba pa rin talaga pag naging teammate mo ng matagal nung college.”

The Pocari Sweat Lady Warriors (1-0) will next face the National University Lady Bulldogs (1-0) on Wednesday, June 1 at 6:30pm.

Collegiate standouts to headline next phase of Gilas Pilipinas