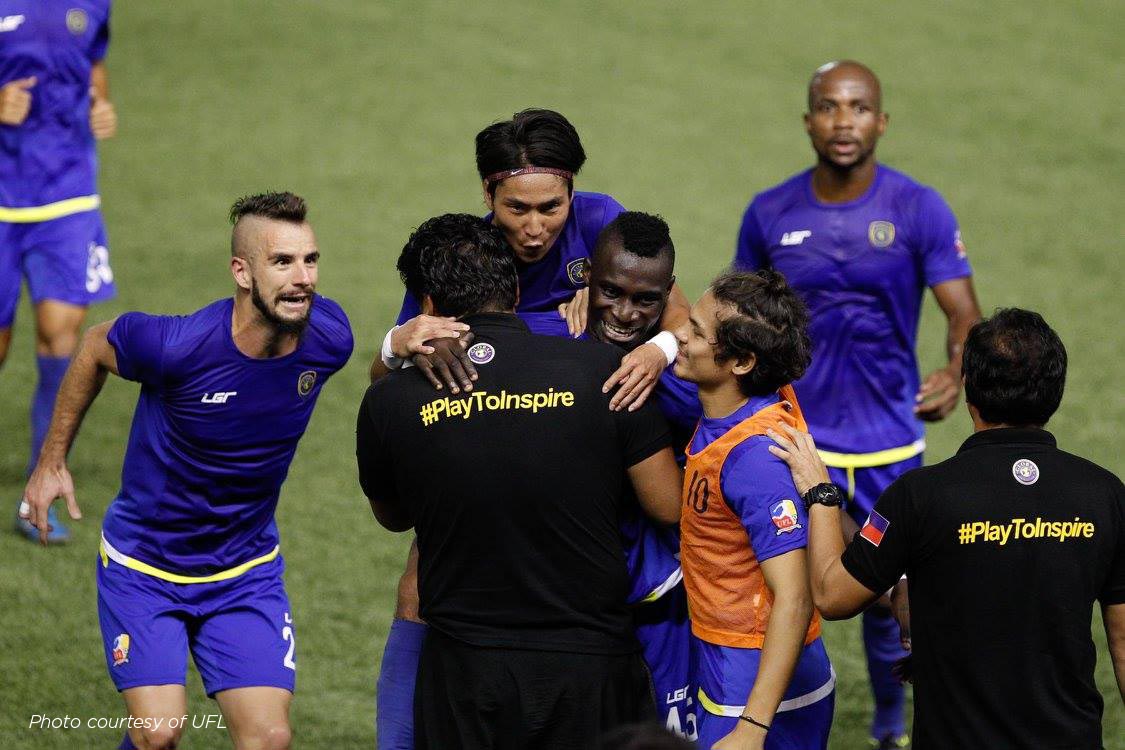 An Arthur Kouassi second-half strike proved to be enough for Global FC in turning back an unwavering JP Voltes and gaining passage into the semifinals of the 2016 United Football League (UFL) Cup.

At the start, JP Voltes held Global pretty well. Their steady defending tested Global’s creativity up front. It took 11 minutes for Leigh Manson’s team to get the ball in a dangerous place. Elhabib picked up the loose ball inside the box and was in a good position to put his team ahead. Unfortunately for him, Lemuel Unabia was there to prevent the Sudanese striker from striking the ball. Moments later, OJ Clarino managed to register a shot on target, a tame one as Noel Gasic gathered it with ease.

Sixteen minutes into the game, it was JP Voltes’ turn to put people in the attacking third. A defensive lapse allowed William Espinosa to give a good try in breaking the deadlock. The JP Voltes midfielder did not make it count though as his effort was nowhere near breaching Patrick Deyto on goal. JP Voltes’ aggression led to more possession in Global’s half. They had a penalty claim dismissed when Takashi Odawara was felled in the box. It would have been a double whammy for JP Voltes if Elhabib finished his chances slightly afterwards.

The veteran striker was nicely set up by Hikaru Minegishi from the left wing. Near the six-yard box, Elhabib was denied by Gasic. Getting the rebound, Elhabib could have picked his spot with only a defender between him and a goal. Yet, he sent it towards PJ Fadrigalan who cleared his strike off the line.

That moment ignited the game, with both teams doing their part in stirring up an exciting match. JP Voltes had more of the shots with Fadrigalan, Yuta Nakagaito, and Espinosa squandering their efforts wide. Minegishi then went on his own and could have changed the score had he kept his shot a bit lower.

Still scoreless, the People’s Club was made to work even harder when Omid Nazari received his marching orders five minutes before the break. The 24 year-old mistimed his challenge on J Baguioro, prompting the referee to book Nazari for the second time in a game. His first yellow came when he fouled Alex Elnar a few moments before. The halftime whistle sounded shortly with the score the same as it was in the beginning at 0-0.

Early in the second half, JP Voltes nearly went in front. Yu Hoshide’s corner at the 52nd minute located Espinosa who nodded the ball. It looked poised to break the deadlock but Deyto made a catching save to preserve his clean sheet.

Seemingly alarmed, Manson shuffled the deck up front. It was a bold move that immediately paid dividends. Replacing Elhabib, Kouassi made an impact almost immediately. The Ivorian substitute tucked the ball in from close range in with just his first involvement on the attack. Kouassi came close in adding his and Global’s tally two minutes after the hour mark. Invited to shoot from around 25 yards, he launched an effort eventually parried away by Gasic. His introduction not only changed the score as it also boosted his teammates’ confidence. At the 73rd minute, fullback Louis Kaole had a decent shot blocked by former Global defender Masaki Yanagawa.

Looking to equalize, JP Voltes got to exploit Global’s loose defending towards the final minutes of the match. They weren’t able to test Global a lot, but one opportunity would have been enough for JP Voltes to at least send the game to extra time. It was almost the case at the 79th minute when Nakagaito moved deep into the Global half until reaching the box. In there, the Japanese player hit a shot that looked tame enough for Deyto to collect. That was the closest both teams went in changing the scoreline as Global held on to seal a place in the semis with a 1-0 win.

After the match, Manson was delighted with the fact that they have made it to the semifinals with a performance he deems uncharacteristic by their standards. “This was not the same level of performance as the Loyola and the Ceres wins. We showed the right spirit. You can’t always win pretty but we are in the semifinals. For me, that’s the important thing because we have the opportunity to play prettier in the semifinals,” he stated. While at it, he also praised their opponents for putting them up to the test until the final whistle.

On Wednesday, Global will battle Stallions for the right to make it to the cup final. As for JP Voltes, they are looking forward to redeem themselves in the plate semifinal against Green Archers United the following day.

Helterbrand giving fans joy while he still can

Goodbye to an unheralded rivalry